Is It Actually Possible to Be Allergic to Exercise?

February 25, 2017 Scott
Jessi K. asks: Joking aside, is it possible to be literally allergic to exercise? 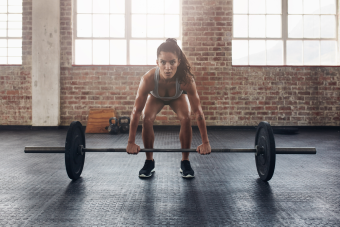 Most couch-potatoes have probably at some point in their lives said, “I can’t run a mile without feeling like I’m going to die!” They might also sarcastically proclaim they must be allergic to exercise. And, amazingly enough, it turns out there is a rare disorder in which someone can be deathly allergic to exercise, a condition known as Exercise Induced Anaphylaxis (EIA).

Allergies, in general, come with a wide range of symptoms, and can range from mild to deadly. Fortunately for most, a deadly allergic reaction, known as anaphylaxis, is rare. It’s generally accepted anaphylaxis affects approximately 2% of the population and EIA is thought to represent only about 5%-15% of all of those anaphylactic cases. Interestingly, of those, women seem to be twice as likely to suffer from it, than men.

It’s important to note that although the symptoms of anaphylaxis can be brought on by exercise, exercise itself might not be the only cause of the reaction; typical allergy mediators like foods, pollens and medications when combined with exercise may result in such a reaction. Among these, food dependent exercise induced anaphylaxis is the most common, accounting for 1/3 to 1/2 of all EIA cases. In essence, your body can handle the offending food, and it can handle exercise, but when you combine them, you get an over-reaction of your immune system.

So what’s going on here?

Our immune system is extremely complex and requires numerous types of cells and molecules working together to fight off a foreign pathogen. Any reaction from your immune system is generally divided into two different categories- innate and adaptive, both of which have specific types of cells working in response to an infection. All of these cells are broadly classified as white blood cells.

An innate immune system reaction uses cells that can recognize several different types of foreign invaders, pathogens like viruses, bacteria, and fungi. It can be activated by some non-infectious problems, like simply being exposed to cold or hot temperatures, and even just pumping-some-iron! The specific types of innate immune system cells include basophils, eosinophils, neutrophils, monocytes and mast cells.

Adaptive immune cells, on the other hand, react to specific pathogens. Usually produced by your lymphatic system, they’re known as B and T cells. While they work differently, both B and T cells have the same goal- defend the body against specific types of invaders. Your immune system can make T and B cells that match the surface molecules of invading pathogens, with the T and B cells able to quickly multiply, producing large numbers of identical cells that can recognize and destroy the foe.

B cells do not directly attack infected cells, rather they primarily produce antibodies- unique protein molecules that attach to specific harmful pathogens, called antigens. This antibody acts like a red-flag to T cells (and other disease killers known as phagocytes) to recognize the foreign body and destroy it. Once the infection disappears, memory B cells can stay around for years, sometimes throughout your entire life. If the same invader appears, it will once again mobilize and attack the pathogen.

Produced by your Thymus (thus T cell), T cells come in several different types, performing different functions. Helper T cells produce chemicals triggering B cells to develop into plasma cells. Killer T cells target and kill cells that have become infected or are cancerous. Regulatory T cells help control your immune systems reaction, preventing it from getting out of hand. Memory T cells, like memory B cells, stick around for a while, quickly reacting should the same invader appear.

When your immune system reacts to an allergy, it can present with symptoms ranging from mild to life threatening. The more common, less problematic symptoms are things like fever, cough, runny nose, itchiness, hives and general body aches. These mild symptoms usually don’t require a visit to the doctor, and if annoying enough, you might treat with over the counter medications like Benadryl, Tylenol or ibuprofen.

Should your immune reaction continue, or become out of control, it can progress to anaphylaxis. Generally accepted as life-threatening, this reaction is more systemic and involves several organs and body systems. It can produce more severe symptoms like nausea and vomiting, abdominal pain and dizziness. It can also result in difficulty breathing from swelling in the face, throat and lungs. Your veins and arteries might begin dilating to the point that your blood pressure becomes extremely low and you pass out. All of this can progress to rapid heart rates, cardiac dysrhythmias and even cardiac arrest.

Since this 1979 report, there have been numerous accounts of patients who have had anaphylactic reactions from exercise, including recognizing the link between food and other allergies when combined with exercise- as previously mentioned with food dependent seemingly the most common.

To be specifically diagnosed with EIA, you need to have symptoms of anaphylaxis associated with exercise. The cause must also be differentiated from an anaphylactic reaction due to food dependent anaphylaxis or being exposed to an allergen before the workout.

It should also be noted that EIA can be brought on by things some people might not consider strenuous, like a mild stroll in the park, though it’s much more commonly seen when a more aggressive workout is attempted. Interestingly enough, the reaction is also not always repeatable- the same exercise causing it today, might not cause it tomorrow.

This brings us back around to what exactly is going on in the body to cause this. While the specific factor, or factors, producing exercise induced anaphylaxis aren’t proven, it’s generally agreed among researchers that histamine release is the key component in the reaction. Histamine is known as an autacoid, which acts like a hormone, only it has a more localized reaction. It’s released from the innate immune system cells, Basophils and mast cells. The process is called degranulation.

Once secreted, histamine helps increase the absorption of allergens to the body’s organs, like the skin. Once there, other mast cells get stimulated to degranulate by an antibody (immunoglobulin isotope) known as IgE. IgE attached to mast cells has long been known to signify an acute allergic reaction.

The acceptance of histamine being the mediator in EIA, comes from the fact there is an increase in plasma histamine, along with the IgE being present on mast cells within the skin, in patients experiencing EIA. These patients also tend to be more susceptible to degranulation of their mast cells and basophils, compared to people who don’t have EIA.

The reason for this lowered threshold, and the exercise-specific reason for degranulation producing histamine, hasn’t been proven. There are some widely accepted theories, however. They include- increased gastrointestinal permeability (absorption), blood flow redistribution, increased osmolality, and increased endogenous endorphin release.

In slightly more layman’s terms- exercise increases the absorption of nutrients and other molecules from the GI tract. The speculation is then that allergens will have greater contact with the parts of the immune system associated with the gut, which happens to be a lymphoid organ. (Probably nature’s way of protecting us from the many potential pathogens we put in our mouths.)

As for blood-flow redistribution, this is thought to contribute because, during exercise, it’s redirected from inactive tissues like those found in your digestive tract, to active tissues like those found in your skeletal and muscle tissues. Those tissues mast cells are different from the ones found in your GI tract. So the thinking is that as long as a food allergen remains in the gut and only exposed to those types of mast cells, it doesn’t cause histamine release. But should it go to the skeletal muscles and skin, those mast cells will degranulate and cause a reaction.

Exercise also causes the release of endorphins, giving you the same type of feeling taking morphine would. The release of these endorphins has been known to enhance mast cell degranulation. It seems reasonable then that the aftermath of this increased endorphin release would escalate the degranulation of mast cells, resulting in a histamine response that causes the cascading effects of anaphylaxis.

This brings us to the final, forerunner in the theories of why certain people get EIA, involving increased osmolality in your intestines- meaning there is more allergen getting to certain areas of your intestines, specifically the worm-like processes called villi, in your small intestines. It’s thought, when you exercise, the mast cells at the bases of your villi get exposed to more of an allergen. This exposure then secretes histamine, which in turn results in an increased distribution of allergen to many of the body’s organs, such as skin, and the cascading effects of histamine then produce anaphylaxis.

No matter the exact cause, the treatment for EIA is the same as any other anaphylaxis- avoid repeating the same behaviors causing a reaction in the first place. As any good doctor would say, “If it hurts to do that, stop doing that”. For those who want to “do that” anyway, recent evidence has suggested that pre-treating people with agents that inhibit cell degranulation may prevent food dependent EIA.

Should you unsuccessfully avoid experiencing anaphylaxis, I’d recommend calling 911. The doctor, or paramedic, will treat the life-threatening symptoms, like the swelling in your respiratory tract and extreme low blood pressure, first, usually using medications like epinephrine, albuterol and atrovent. They will then attempt to stop histamines cascade of death, with antihistamines like Benadryl, and corticosteroids like Prednisone or Solu-Medrol.

In the end, yes, a person can be allergic to exercise. But as it’s an exceptionally rare condition, should your body mass index be higher than your age, you probably aren’t one of those who can use it as an excuse not to hit the gym.