How Do Trees Get Water from the Ground Up to Their Leaves?

March 31, 2017 Melissa
Jerrod A. asks: How do trees pump water from their roots all the way to their tops and tips of their branches? 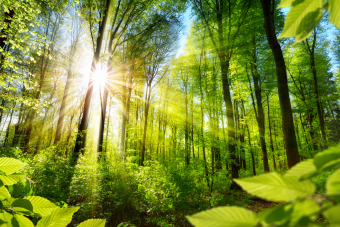 Trees need water throughout their bodies, from the depths of the roots to the tips of their leaves, sometimes tens of meters above the ground. So how do they manage to get the water up there?

To begin with, in the general case tree roots usually have higher concentrations of minerals than the soil that surrounds them. This causes root pressure, a phenomenon whereby the roots draw water in from the adjacent ground via osmosis.  (In contrast, minerals are drawn in to the area of higher mineral concentration in the roots via a different, active transport mechanism in which carrier cells in the root hairs pick up the minerals and transport them into the roots.)

As water is pulled in, the new water creates pressure on that previously drawn, which causes it to move higher up the fluid column contained in the xylem, a transport tissue that runs the length of the trunk and up through the branches and the leaves.

While you might think this negative pressure would be minimal at best, it can actually reach pretty astounding levels at times, even upwards of -20 atmospheres, though it should be noted this varies greatly even within a specific tree, based on things like humidity levels, temperature, wind, soil moisture level, etc.

It should also be noted that there is a level of liquid adhesion to the walls of the xylem conduits helping to keep the fluid from flowing back down even as negative pressure decreases (such as when the stomata close) and gravity starts to take over.

Speaking of the xylem, trees that grow rather quickly typically have adapted wider xylem vessels, which increases the efficiency of moving water up through the tree; offering plenty of water and minerals throughout the plant to help facilitate its rapid growth.

However, wider vessels have a downside- the wider the xylem vessels, the greater the chance the tree will develop embolisms (air pockets), sometimes as a result of things like a dry spell that results in insufficient soil moisture causing some of the gases to boil off in the xylem as the negative pressure becomes too extreme.

As a pocket of air within a xylem vessel will stop the water flow (and sometimes spread rapidly throughout the xylem making the problem much worse), once enough bubbles are formed, the tree can no longer transport sufficient water throughout its body and it dies. (These types of air pockets are also why you should always put freshly cut flowers into water as quickly as possible in order to stop air from being drawn up, which in turn will stop the flower from later being able to suck up water; thus, the shelf life of your flowers in a vase diminishes significantly.)

On the other hand, trees that have a relatively slow growth rate often have narrower xylem vessels (which results in slower transport of water and nutrients); being smaller in diameter, the vessels of these old, sometimes eventually super tall trees are much less likely to develop such embolisms, potentially helping them live significantly longer than many of their brethren with wider xylem vessels.