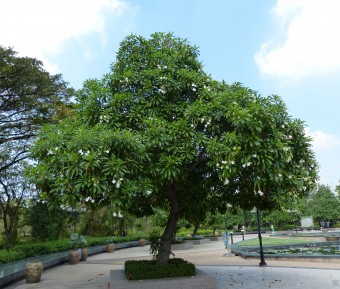 Due to the fact that they can’t move and as such can’t sneak up on you, many people never really think of trees as being dangerous. As it turns out though, beyond the occasional tree that kills a person by falling on them, there’s also a tree out there so deadly it has been dubbed “The Suicide Tree”. But as you’ll soon see, “The Murder Tree”, is just as apt a name.

Cerbera odollam is a small hardwood tree (see, How Do They Differentiate Between Hardwood and Softwood Trees? really, that title sounds boring and obvious but it’s actually not what you think and is super fascinating; I promise…) that can, under favourable conditions grow to around 10 metres in height and is endemic to India and south-east Asia. Despite its unassuming appearance, the tree hides a deadly secret inside of the husk that contains its seeds. These seeds contain a cardiac glycoside called, cerberin. Cerberin is incredibly toxic in relatively low dosages, often killing its victims within a few hours, during which time they may suffer crippling stomach pain, diarrhea, irregular heart rhythm, vomiting and sometimes a splitting headache. Eventually, once enough of it accumulates in your system, the cerberin will succeed in completely inhibiting the cellular “sodium/potassium pump” enzyme (Na+/K+-ATPase), screwing with the heart’s electrical system and ultimately stopping it dead, very similar to how lethal injections in the United States work. (See: How the Heart Works and Why Proper Sterilization Procedures are Used During Lethal Injections) And for reference, a single cerbera odollam seed contains a lethal dose of cerberin for a typical adult human. 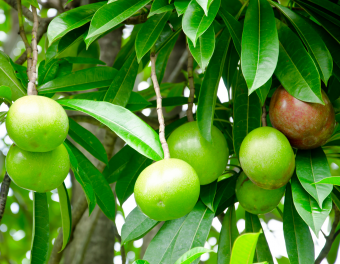 While accidental ingestion of the inner seed is not completely unheard of, due to the fruit produced by the cerbera odollam being edible, if a little bitter, it is commonly used for murder and suicide in Indian coastal towns which border the sort of marshy swampland the tree likes to grow in. Exactly how many people are killed each year due to someone having their food intentionally spiked with cerbera odollam seeds isn’t clear because the poison produced by it doesn’t show up on normal toxicology reports, and is relatively unknown in many regions of the world. This has led some experts, such as French Toxicologist Yvan Gaillard, who published the results of a decade long study on this very topic in the Journal of Ethnopharmacology, to describe the plant as being “perfect” for murder. You see, most toxicologists, even if they’ve heard of the plant, will only test for cerberin poisoning if there’s a strong suspicion the victim consumed something containing it prior to their death, because testing for cerberin poisoning is rather costly and requires the use of “high-performance liquid chromatography coupled with mass spectrometry” to detect with any degree of certainty- something that is not an option in many regions anyway. Of course, those toxicologists who haven’t heard of it would never know to check.

Because of this, the amount of deaths caused by cerbera odollam poisoning is uncertain. That said, based on the documented instances that are known (which likely make up a small percentage of the actual total), the plant is responsible for at least a death per week in the South Indian state of Kerala alone, where the plant grows wild and in abundance and is responsible for an estimated 50% of plant poisoning cases annually in the region.

You might wonder why a person being poisoned with such a seed wouldn’t taste it, given its bitter flavour, but the seeds can easily be masked by putting them into a dish containing something like chilies that are prevalent in Indian cuisine. The taste can also be masked with sugar, and the vast majority of suicides committed via ingestion of the seeds is done by removing the seed from the outer husk, then crushing and mixing it with raw cane sugar. “Just a spoon full of sugar helps the medicine go down” and all that. Not the most pleasant way to die, but given it’s freely available in places like Kerala, and has a relatively certain outcome, it remains extremely popular.

Interestingly, with the limited data we do have (including suicides and murders), it’s noted that 75% of people who die via ingesting the cerbera odollam seeds are women. Researchers at the Laboratory of Analytical Toxicology in La Voulte-sur-Rhône speculate that this massive gender discrepancy is because the plant is being used to poison newly married wives “who do not meet the exacting standards of some Indian families“. However, beyond the murders, young women are also statistically much more likely to use the cerbera odollam seeds to commit suicide; such was the case in May of 2015 when four young girls consumed cerbera odollam seeds as part of a suicide pact after being abused at an athletic training camp. That said, it should be noted that in the Western world, while about four men will commit suicide for every one woman, nearly three times as many women as men will attempt to kill themselves. If the popular method of suicide in the Western world was using something like cerbera odollam seeds where death is almost certain, it could potentially skew those tragic numbers significantly to be somewhat more inline with the Laboratory of Analytical Toxicologies data for Kerala, India.

Whatever the case, the prominent use of this plant in suicides and murders has led to local governments trying to find new uses for this natural resource. Particularly in impoverished areas, if the seeds have marketable uses, it’s literally money growing on trees for any of the populace who wants it, making the seeds less readily available as they’re harvested en masse- so less death and more money in the local economy. Towards this end, in recent years the seeds have begun being harvested for use in various products like bio-insecticides and rat poison, among other things. In Kerala, where the plant is responsible for more deaths than anywhere else on Earth, locals can earn a decent living dehusking the plant with their bare hands in various processing yards across the state. We bet lunch hour at those places is really tense…