May 18, 2015 Karl Smallwood
Richard K. asks: How do they set the dividing line in hardness between what’s considered a hard wood vs. a soft wood? 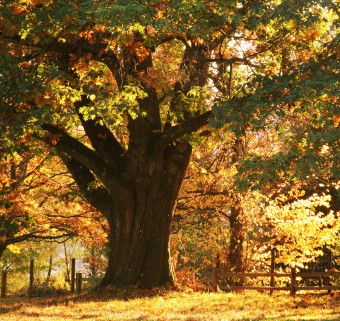 Generally speaking, wood is often put into one of two categories- hardwood and softwood. But what exactly makes a given piece of wood qualify as either hard or soft and how did those definitions come about?

Perhaps the most important and misunderstood aspect of defining wood as either hard or soft is that it has absolutely nothing to do with the individual qualities of the harvested wood itself. The most famous and oft used example of this concept is that of balsa wood which, despite being literally one of the least dense (and hence softest) woods of all, is technically classified as hardwood. Likewise, the wood of the yew tree, which is classified as being a softwood, is a great deal tougher than many hardwoods including several types of oak. So what’s going on here?

Well, the basic answer is that classifying a wood as either hard or soft is entirely dependent on the seeds produced by the tree it comes from. If a tree’s seeds have some sort of covering when they fall from the tree, be it in the form of a shell or fruit, then the wood of that tree will be classified as hardwood. On the other hand, if a tree produces seeds that are simply left to the elements when they fall to the ground, then the wood harvested from it will be classified as a softwood.

The technical term for a tree that produces seeds sans any sort of covering is “gymnosperm”, a term derived from Ancient Greek which literally translates to “naked seed“.

In regards the trees that produce covered seeds, the technical term is “angiosperm”, a word that is again taken from Ancient Greek and roughly translates to “vessel seed” or more aptly, “seeds contained in a protective vessel”. As previously mentioned, angiosperms include any tree that produces fruit as well as any tree that produces seeds protected by some sort of shell, like an acorn.

According to The Dawn Angiosperms, by Xin Wang, the term “angiosperm” was first coined way back in 1690 by a German botanist, Paul Hermann, who coined it as a way of classifying members of the plant kingdom by the one thing they all had in common- seeds.

Although the terms hardwood and softwood are in no way related to the relative toughness of a given piece of wood, it’s noted that, for the most part, hardwoods are usually harder than softwoods. This leaves the obvious question of how exactly one classifies how hard a piece of wood is?

The most common way is using something known as the Janka Hardness Test, which has been an industry standard since 1906. This involves measuring the average amount of force required to “embed a .444-inch steel ball to half its diameter” in some type of wood, with the average used so that the difference in hardness between heartwood and “live edge” wood doesn’t skew things too much. It is also distinguished via “side hardness” and “end hardness” (whether this test was done on the surface of a plank (side) or on the cut surface (surface of the stump), which is “end hardness”.  Most of the time, the numbers you’ll see quoted here are referring to side hardness.

The Janka test itself it the brainchild of one Gabriel Janka who came up with it after being asked by the Department of Agriculture to find an “objectively and scientifically” sound way to measure the hardness of a piece of wood.

For the curious, according to the Janka test, the softest wood in the world belongs to the Cuipo tree, which has a rating of just 22 lbf (pounds-force) making it is drastically softer than Balsa wood which has a higher, but still very low rating (as you’ll soon see) of 100 lbf. Interestingly enough, like Balsa wood, Cuipo wood is classified as a hardwood.

The hardest wood is said to come from the Australian Buloke (pronounced “Bull-oak”) tree, with a staggering rating of 5060 lbf. (For reference, a commonly worked with type of wood that is generally considered very hard is Hickory, which rings in at 1820 lbf.)  Wood from the Buloke is fairly difficult to come by, so not often worked with, though woodworkers who’ve had the chance often describe it as being “like a rock”. However, this is relative to many other woods. In truth, it can be cut with a regular old handsaw. It just takes a lot more time and effort than most commonly worked with woods.