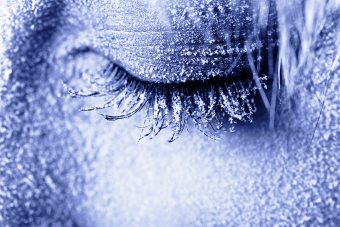 We’ve all probably heard of a person being pulled from cold water after a seemingly unrevivable timeframe. Miraculously, they survive and more or less make full recoveries. A 7-year-old girl named Stella Berndtsson from Sweden currently holds the record for having the coldest body temperature and still surviving. After falling into the sea on the island of Lyr, in Sweden, she was found lifeless, without a heartbeat or spontaneous breathing. Her core body temperature was down to 55.7° F (13.2° C). She’s now made a full recovery.

Stella is one of countless people who have survived extended periods of time without oxygen. What about hypothermia makes this possible? Simply put- hypothermia decreases your metabolic rate, while simultaneously reducing a few other destructive processes that occur when your brain goes without oxygen and then suddenly gets re-perfused.

For the longer, more detailed, answer of exactly what’s going on here, let’s see what neuroprotective effects a slow metabolism in the presence of hypothermia can have on your brain and where the practice of lowering body temperature as a form of treatment got started.

Treating medical conditions with hypothermia is nothing new. In fact, it was recommended in an ancient Egyptian medical text dating back 5000 years, called the Edwin Smith Papyrus. Hippocrates himself was known to use hypothermia to reduce bleeding in the wounded. In the fourth and fifth centuries, it was also used to treat tetanus.

Along with treating the sick and injured, hypothermia’s brisk-brain protection has been allowing people to survive in some amazing situations. In 1650, a 22-year-old woman named Anne Greene was hung on a cold day in December. After approximately 30 minutes, she was cut down. She later began showing signs of life, and eventually made a full recovery. Pardoned, she then married, had children, and went on to live a full life.

More recently, in 2002, two prospective, randomized-controlled trials looked at inducing mild hypothermia in people who had brain injuries caused by lack of oxygen following cardiac arrest. They found 49% of people treated with mild hypothermia survived compared to 26% of those who weren’t. The hypothermia patients also had better neurological outcomes and lower mortality rates after six months. Following these two studies, hypothermia has been added to most post-resuscitation treatment guidelines. Your doctors will put you in a mild hypothermic state, usually between 90-93 degrees Fahrenheit (32.2°-33.9° C); keeping you there for around 24 hours, they will then let your body slowly warm up.

So what’s going on here? The body needs to maintain a certain temperature for all its cellular processes to react normally. Known as homeostasis, any temperature fluctuation, either too high or too low, will cause abnormal processes to take place, often leading to unwanted side-effects like seizures, progressing to death. (On that note, hypothermia, in the general case, is a bad thing. If amputating your frost-bitten toes isn’t enough to keep you from avoiding it, systemic problems like decreased brain function and cardiac dysrhythmia’s leading to death, hopefully will.)

Stage 1 comes with a body temperature between 89.6-95° F (32°-35° C). This usually results in the annoyingly common symptom of shivering, which increases the body’s normal production of heat.

If this doesn’t work and the body continues to cool, it enters stage 2, from 82.4-89.6° F (28°-32° C). At these temperatures, your body will stop shivering and your brain’s electrical activity becomes abnormal. The abnormal brain function has been known to cause disorientation, confusion and combativeness. Sometimes you’ll become so crazy-cold (pun intended), you’ll begin taking off your clothes in a process known as paradoxical undressing. This, obviously, increases the rate at which you will succumb to your frigid condition. This can also lead you to becoming so drowsy you simply curl up in the snow and, without intervention, die.

This leads us to stage 3 hypothermia, which features a core temperature of around 68° to 82.4° F (20°-28° C). This stage usually finds a person unconscious. Their heart begins to slow down due to a decrease in its ability to metabolize electrolytes. The result is decreased blood output, and blood pressure, progressing to pulseless dysrhythmias like ventricular fibrillation. Soon the heart will cease all electrical activity and you’ll be dead.

Finally stage 4 is anything below 68° F (20° C). At this point, there are no vital signs present. The heart is completely stopped and electrical activity in the brain appears consistent with brain death.

All this said, should hypothermia cause this death, or you induce a mild hypothermia after reviving someone suffering from some other issue, it can have a protective effect, functionally allowing you to prolong the time your brain can go without oxygen. As the famous cardiac-arrest-treatment saying goes, “You’re not dead, until you’re warm and dead!”

When the brain is working normally, an intracellular organelle known as mitochondria will take in nutrients like carbon, oxygen, hydrogen and phosphorus. Through several chemical processes, like the Krebs cycle, it will either break down nutrients or combine them into usable molecules. Those molecules, in turn, are what allow for the many processes involved in cellular function- tasks such as producing a molecule called ATP (adenosine triphosphate). Known as the main energy source of cells, ATP is responsible for many cellular functions, like transporting proteins, fats, and electrolytes in and out of the cell.

Once blood flow to the brain stops, several undesirable processes begin to happen. A disruption in the cell membrane, caused by mitochondria not producing enough ATP, results in excess calcium influx. This leads to a cascading affect, further disrupting mitochondria. The result is a change in the electrical charge within the cell, called depolarization. The consequence is excess glutamate into extracellular space.

Should you have a prolonged exposure to excess glutamate, extracellular fluid begins becoming more acidic. It will excite other proteins (amino acids) to produce even more acid, resulting in the cell’s death, called apoptosis. Go too long without blood-flow to the brain and these processes will kill all your brain cells and you die. Well known throughout the medical community, for every 1 minute you go without oxygen, you decrease your chance of survival by roughly 10%.

Should the cells only go a few minutes without oxygen, leaving behind some living cells, and your heart starts beating again, the reintroduction of blood to the brain can also have negative effects. The body responds to the injury in several destructive ways, including the overreaction of the cells’ receptors (called excitotoxicity), the inflammation of your neurons, the production of damaging free radicals and blood vessel leakage. All of this can lead to seizures, cerebral thermo-pooling and countless other deadly repercussions. The severity of these reactions will be what determines if your brain cells live or die in this scenario.

Hypothermia protects you from these harmful processes in several ways. The metabolic rate of neurons is decreased by 6%-7% for every 1.8° F (1°C) drop in body temperature. As hypothermia increases, blood flow decreases to the brain. This reduces the need for oxygen inside your cells, and preserves a process called autoregulation- basically, keeping the phosphate compounds and energy stores (glucose) available for the cell to use, should you be so fortunate as to have blood flow restored. It also prevents lactic acid production, thereby decreasing acidosis and preventing apoptosis.

Once blood flow is restored, the result of hypothermia’s decrease in your metabolic rate helps reduce the number of free radicals and amount of acid-blood from reaching your mitochondria. It’s also thought that colder temperatures improve brain glucose utilization. Hypothermia also reduces the amount of excitatory proteins causing excitotoxicity.

Along with protecting your brain after cardiac arrest, there are countless medical conditions researchers feel could be helped by hypothermia. Almost all of these revolve around the aforementioned mechanisms the brain uses to keep itself functioning. These conditions include brain injuries caused by trauma; intracranial pressure caused by numerous medical problems; brain bleeds, known as subarachnoid hemorrhage; stroke; spinal cord injuries; and psychiatric abnormalities caused by liver dysfunction, known as hepatic encephalopathy.

In the end, should your brain go too long without oxygen, or the reintroduction of blood flow causes its cascade-of-death, your brain will no longer be able to keep you alive. If you find yourself in this predicament, hope your doctors induce a hypothermic state, giving you a better chance of survival. If not, the silver-lining is, should your other organs survive, you get to become an organ donor and countless others get to live or have a better quality of life because you die. Kind of like being a hero! Become an organ donor people!