November 4, 2013 Scott
Ken Laha asks: How long would someone’s heart have to be stopped before you’d stop trying to revive them? 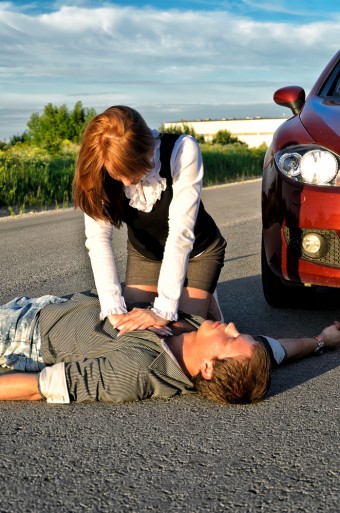 The question of how long someone’s heart would have to be stopped for before you can safely say that regardless of what you do, you’re not going to be able to revive them is a very tricky question. It’s not as simple as saying after 10 or even 20 minutes there’s no hope. For instance, there are countless people who have been subject to hypothermia, have their heart stopped for over 45 minutes, and still have been successfully revived. So many, in fact, that the current guideline set by the American Heart Association (AHA) is that you continue trying to revive the person until their core body temperature is above 95 degrees Fahrenheit- 95 degrees, because below that is the technical definition of hypothermia. The mantra in that situation is, “They’re not dead until they’re warm and dead.”

In other situations, numerous factors need to be considered when deciding when to stop trying to resuscitate someone, such as how quickly CPR was started after their heart stopped; how well CPR was performed (note: CPR does not require mouth to mouth and recent studies seem to indicate the person has a better chance of surviving with just compressions in most cases); the types of medications used during the resuscitation; the medical history of the person, known as comorbid factors; and, finally,  the cause of the cardiac arrest in the first place.

With this in mind, let’s take a quick look at some of the most common things to consider when trying to resuscitate someone, and how long you would try to revive them in those situations.

The first, and most important thing to consider is the point of trying to revive the heart in the first place- that’s to supply the body, and most importantly brain cells, with adequate blood flow. The first question any rescuer needs to consider is, “What’s the likelihood that the victim’s brain cells are still functioning?”  If there’s a good chance that if you get their heart back going, the person isn’t going to be a vegetable, you continue trying. If not, you typically don’t. For this, a general rule of thumb is that brain cells begin to die after approximately 4-6 minutes of no blood-flow. After around 10 minutes, those cells will cease functioning, and be effectively dead.

That said, there are some exceptions to that rule. In situations of slow metabolism, like when the person is hypothermic, those time-frames are extended. If good CPR is being performed, the brain cells are also getting some blood supply, although decreased, so the time frame is again extended to the point the rescuer feels is appropriate.

The second thing to consider is, “What is the electrical function of the heart?” The heart itself is a two part pump- one part electrical, the other is plumbing. The electrical part is mediated by electrolytes like sodium, potassium and calcium. The electricity created is what “shocks” the heart and causes it to contract and squeeze blood out to the body. For a complete explanation of how this works check out our article on How the Heart Works.

If there is some electrical function, and good CPR was being performed (thereby continuing to get some blood to the brain) most will continue attempting to resuscitate. If no CPR was being performed, then possibly not. No blood flow would have been getting to the brain and thus after around 10 minutes, it would be futile in most cases. Unless of course you were going to attempt the resuscitation for the purposes of providing organ donation, then maybe. Hopefully you are beginning to see why this is such a tough question to answer.

If there is good electrical function and it isn’t creating a heart beat, good CPR is being performed, then continuing to try and revive the individual would be a wise decision- even if it’s been 45 minutes. That being said, there can be good electrical function and no heart beat, called PEA (pulseless electrical activity) and if the rescuer feels it has been too long for the brain cells to survive, they might still decide to stop at 30 or even 20 minutes.

From this so far, you might be thinking to yourself that it all comes down to the electrical function of the heart- if it’s there, you continue; if not, you don’t. Unfortunately, that’s where this gets even more complex. Depending on what is happening electrically within the heart, there are medications and treatments that can be given in an attempt to put the heart in a better pulse-producing situation. Let’s look at some of those situations and talk about times.

The most common electrical rhythms the heart can be in when it isn’t beating are asystole (no electrical function), ventricular fibrillation (the heart is quivering like a person having a seizure), ventricular tachycardia (the bottom part of the heart is beating really fast), and PEA (anything that isn’t one of the other three).

Before we talk about the types of medications and treatments that can be attempted, and the time-frames, I need to say that when someone is in cardiac arrest, the absolute best treatment known to man is good CPR compressions combined with early defibrillation (see my article on Top 5 Life Saving First Aid Tricks Everyone Should Know). No medication or treatment should ever be given in place of those two things. That being said, if those two things aren’t enough, there are some things a rescuer could try.

When it comes to the medications given, you have to take into account the time it takes for them to work. This will vary greatly depending on CPR compressions and numerous other factors like normal time for that medication to be metabolized. So the times I give are the best approximates we currently have. I also won’t be going into how they work or why you would choose one over the other, as this article is already pretty long. I will simply give you time frames for them to work because a rescuer would need to continue attempting to revive the victim until that time.

Let’s start with asystole. Currently, the AHA recommends using epinephrine or vasopressin combined with good CPR compression to circulate it. Epinephrine begins to cause reactions within about 1-2 minutes and begins to become less effective around 5 minutes. The AHA, thus, recommends giving a dose every 5 minutes of resuscitation. You would continue trying to revive the victim with this drug until you felt the brain cells had no chance, or you had no change in the electrical function of the heart. 20 minutes is a common time frame.

Vasopressin takes approximately 20 minutes to begin to cause a reaction. A rescuer would need to continue attempting resuscitation for at least that long before they would expect a result. 20 minutes would then be the minimum amount of time you would attempt resuscitation. Some would continue longer, especially if they had a change in the electrical function of the heart.

Ventricular fibrillation and Ventricular tachycardia are treated almost the same. Externally shocking the victim is the treatment of choice. Along with Epinephrine, the AHA also recommends giving Amiodarone, and if that’s not available, Lidocaine. Amiodarone begins to work around 10-15 minutes, Lidocaine around 2-5 minutes. You would continue giving this drug until you reached its maximum dosage. With Amiodarone you use only one large initial dose, followed by a smaller dose should you get a heartbeat back. With Lidocaine, you would give approximately three doses. The time frame for this type of resuscitation can be quite long. This is because all of those treatments take time, and you could choose several different orders in which to give it.

You would start with shocking the victim, wait 2 minutes, then give Epinephrine, wait another 2 minutes, then choose Amiodarone or Lidocaine, or any of the 4, and then continue from there. As long as the person is still in this rhythm, you would continue. Should it change, you would then change your treatment. I will say, I have personally seen this rhythm persist for well over 30 minutes.

We then get to PEA (pulseless electrical activity). This is its own animal as it could be any sort of rhythm that isn’t one of the others. Because of this, the gold standard is trying to fix the cause.  For this, the AHA has a handy little mnemonic called the 6 H’s and 5 T’s. The H’s are: Hypovolemia (not enough blood), Hydrongen ion (acidosis), Hyper/Hypokalemia (high or low potassium), Hypoglycemia (low blood sugar), and hypothermia. The T’s are: Toxins (either drugs or chemical), Tamponade (cardiac tamponade, meaning fluid around the heart), Tension pneumothorax (a hole in your lung that progresses in to pressure on your heart), Thrombosis (clot or other occlusion in your blood vessels), and Trauma.

The treatment for each of those situations takes its own amount of time. Some take as little as 1-2 minutes, like in the case of fixing acidosis. A person could give a drug called sodium bicarbonate, or one could artificially breathe really fast for them. Some treatments can take well in excess of an hour, as in the case of fixing hypothermia.

Things can get even more complicated should the victim begin to have several different heart rhythms. In those cases, and with most cases, it really comes down to whether or not the rescuer feels the brain cells are still viable. That decision is very subjective in nature. One doctor or paramedic might not choose to resuscitate someone when another would. Both could be correct in their decision, depending on what they thought was the cause.

With all of the specific treatments considered, it really comes down to brain cells. If they could still be viable, you would continue attempting resuscitation. If not, then you wouldn’t. General time-frames that are common in hospitals and with paramedics are 20-40 min, should they choose to start resuscitation. But, even within those time-frames, they might choose to not even try, depending on the situation.

I know it’s not a concrete answer like “20 minutes”, but hopefully this was at least an informative and interesting read. From my many years of personal experience, I can tell you that the longest I have ever personally seen a person’s heart not beating and they were able to be successfully revived (meaning they walked out of the hospital with somewhat normal neurological function) was over 40 minutes. Luckily for that gentleman, he did have CPR started almost immediately and advanced life support was started within 12 minutes.