Why Is Comfortable Air Temperature So Much Lower Than Body Temperature? 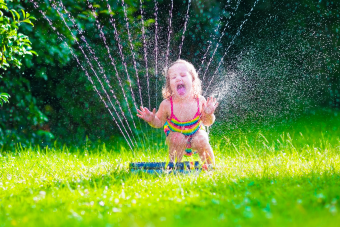 Each summer as temperatures approach 98° Fahrenheit (about 37° Celsius), we hear news stories about people suffering (and sometimes even dying) from overheating. Yet these temperatures are essentially the same as normal body heat. So why isn’t this a comfortable temperature for us?

Our bodies constantly generate heat through the moving of muscles in the arms, legs, diaphragm and heart, by the work of tiny little “ion pumps” that send electrical messages through the nerves and, of course, in the process of digestion, among other ways.

While the body must maintain a certain temperature (about 98.6° F / 37° C  give or take a degree or so depending on a variety of factors), too much heat, or too little, can be fatal for a variety of reasons including many necessary enzymatic functions not working properly outside of certain temperature bounds. So, to maintain the proper balance, your body uses several processes including exhaling warm air, sweating and having warm blood circulate close to the skin’s surface to cool off. Conversely, it might burn extra calories, constrict certain blood vessels (to limit blood flow to the skin), and shiver to warm up. (And, note: drinking alcohol makes you feel warm when you’re cold primarily because it’s dilating your blood vessels, overcoming one of your body’s natural defenses against the cold. Thus, drinking alcohol to stay warm actually is a sure-fire way to rapidly cool yourself off, often without you being aware of it because your skin feels warm, which is particularly dangerous in certain circumstances.)

Beyond ambient temperature, humidity also impacts these processes on both ends. In cold, damp weather, the humidity acts in a similar manner as sweat – causing evaporative cooling. However, on hot and humid days, that same humidity interferes with the evaporative process.

Of course, those of us who are “always” cold, as well as those of you who are always hot, know there must be more to it than just air temperature and humidity. And, in fact, there are actually six general thermal comfort factors that influence whether you’ll feel hot or cold in a given ambient environment.

These include the presence or absence of wind or other air movement. For instance, according to the National Weather Service, a daytime temperature of 25° F (-4° C) and a wind of 20 MPH would produce a wind chill of 11° F (-12° C).  Another factor that affects your thermal comfort is whether you are receiving heat from a radiant source, like the sun or a fire. The amount and type of clothing worn is also on the list.

The final general factor is metabolism- essentially the rate at which a body can transform chemical energy into heat and work. Generally speaking, the more active a body is and the more muscle mass you have, the higher the metabolic rate (and amount of heat produced). For reference, according to the standard table, the rate for sleeping is 0.7 met, for sitting quietly is 1.0 met and for walking and generally moving around 2.0 met. Of course, metabolic rates can vary widely between people based on a variety of factors, which helps explain why you might be freezing cold (all other thermal factors being relatively equal), while your partner sitting next to you is “soooo” hot.

So, the bottom line is that for (most) people in the majority of circumstances, ambient temperatures that are around human body temperature are simply going to be too hot for your body’s cooling mechanisms to overcome the sweltering heat combined with the natural heat it generates while doing what’s necessary to keep you alive. However, your mileage may vary depending on a variety of factors like what kind of clothes you’re wearing and if it’s windy or if you’re dehydrated, how much you’re exerting yourself, etc. For instance, I personally know a very elderly woman who feels cold unless the ambient temperature hits at least in the low 90s. Getting heat stroke while going on a road trip with her has a non-zero probability of occurring when she gets to set the car temperature to her comfort level and you made the mistake of wearing a sweatshirt for a top because it was 10° F (-12° C) outside the car. (True story.)