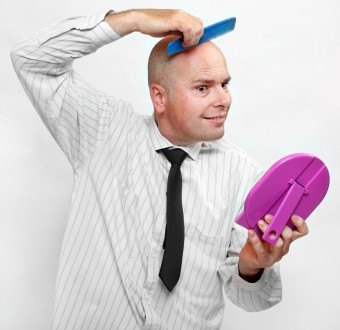 Have you ever looked at the shiny dome of your grandfather and wondered, “Should I start stocking up on head wax soon?” Statistically at age 30 you will have a 30% chance of going bald. This increases by 10% every 10 years. So someone 50 years old will have a 50% chance of being bald. Due to the genetic factors involved with baldness, it stands to reason, if your grandfather is bald, you too will have to face that demon. Fortunately, scientists have pinpointed the genes responsible and just might have a cure for baldness in the next few years.

Hair loss is simply termed “alopecia”. This refers to any type of hair loss no matter the cause. There are numerous things that can cause hair loss, from medical treatments like chemotherapy, to scalp infections and stress. Countless other disease processes can also result in hair loss. The type we think of as “male/female pattern balding” is known as androgenetic alopecia (AGA). This is by far the most common type of balding and accounts for approximately 90% of all male cases.  It’s also the leading cause of female balding.

Hair, like cells in our bodies, have a growth cycle. There are three phases: Anagen- the active growth stage (80-85% of hair is in this phase); Catagen- this phase is also known as the transitional phase, when hair begins to stop growing; and telogen- this phase is when hair growth is completely shut down and the fibers fall out (10-15% of our hair is in this phase at any given time). After your hair goes through the Telogen phase, Anagen begins again and voila! More hair! This cycle repeats itself throughout our lifetimes.

In the case of AGA, as we age, our hair follicles begin to shrink. The result is hair that begins to develop abnormally causing lighter, finer, and shorter hairs.  In the end, the hair falls out, never to return.  They also tend to have shorter Anagen phases. There are currently two known pathways that seem to work together to mediate this process. The first is hormonal and has been known about for decades. The second was discovered in 2011 and made public in 2012. It involves the genes associated with baldness.

At the base of our hair follicles is a structure known as the papilla. It is in direct contact with blood capillaries that feed it the essential nutrients for proper hair follicle growth. These papilla have a large number of receptors that allow certain hormones to attach to them. They are called androgen receptors.

There is a type of androgen hormone in our bodies known as Dihydrotestosterone (DHT). Our bodies make this from the testosterone that appears in normal blood levels. When testosterone is aided by an enzyme (type 2 5-alpha reductase) which lies in hair follicle oil glands, it turns into DHT and begins to bind to the androgen receptors. Once there, it shrinks the follicle, over time, causing AGA. Before 2012, this process was thought to be the most important pathway to baldness.

In 2012, researchers at the University of Pennsylvania’s School of Medicine, announced that they had found the gene responsible for male pattern baldness, and as a result think this is now the most important path to your shiny dome.

Known as Prostaglandin D2 (PGD2) it was found present in abnormally high numbers of bald scalps. There are an array of stem cells present in every ones’ scalp, both bald and hairy alike. These cells get activated throughout our lifetimes to maintain our hair follicles in good working order. The researchers found that stem cell descendants that actually make up the hair follicles (progenitor cells) were diminished in balding men. The result is hair follicles that become damaged over time- withering and becoming miniaturized. After testing for the possible genes responsible, they found PGD2 was the culprit.

The researchers then came up with an ingenious idea. All they would have to do is inhibit PGD2 from activating and your hair follicles should be able to go on working normally. They would create a decoy molecule that would bind to the receptor sites PGD2 did, and thus get in the way of PGD2 being able to wield its unfortunate powers. The good news was there are already numerous medications in clinical trials that would inhibit PGD2. They are being developed for the treatment of asthma and allergic rhinitis (nasal problems caused by allergies). All that needs to be done is to take these drugs and tweak them to work on balding. The researchers feel that a drug could be developed in approximately 2-5 years.

Until this new, apparent cure, for baldness reaches the market, we are left with current methods of treatment. There is the commonly known topical treatment Minoxidil. This drug prolongs the anagen growth phase of normal hair, and enlarges miniaturized follicles gradually into normal ones. This can take up to 12 months and you need to continue treatment indefinitely. Once you stop, hair loss will resume. The bad news is that only 30%-40% of patients will get the results they want.

Another treatment is the drug Finasteride, commonly known as Propecia. This oral drug prohibits testosterone from converting into DHT, thereby keeping the hair follicle healthy. This also can take several months, or even years to help re-grow hair.   It does, however, appear to work on a majority of men. Unfortunately ladies, due to potential side effects, most doctors don’t want you using it.

Another, more invasive and expensive, technique for vain people everywhere, is surgical. You can have hair transplanted from areas with normal growth to areas of baldness. The techniques have become very refined and have great success rates.

Until drug manufacturers pass their FDA clinical trials for PDG2 inhibitors, 50% of us at age 50 will have to either live with being bald, or continue to use current methods of treatment. While we all wait with eager anticipation, may I just say, never, ever comb-over! Either live with reality and shave what little hair you have left, or enjoy the skullet God gave you!  Look at Patrick Stewart- bald since his late teens, yet despite this was once rated alongside Cindy Crawford as TV’s most “bodacious” man and woman.