Why Snot is Green and Yellow 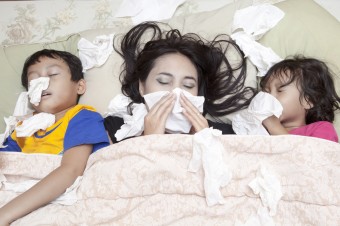 Snot is an essential part of a healthy body (no, really), and its color and consistency can give you a lot of information about what’s going on in yours at any given time.

Produced in the lining of the sinuses, nose, throat, mouth, lungs and even digestive tract, mucus provides a protective coating over tissue surfaces, keeping them moist and in proper order. Comprised of enzymes, antibodies and protein, one of mucus’ primary roles is to catch and kill invaders, including viruses, bacteria and even particles.

Why is there sometimes so much of it?

On a good day your body will produce between 2 to 3 pints of mucus. On a bad day, such as during allergy season or when you have a cold, the tissues that make mucus react to the distress call (often sent out by histamine in reaction to an invader) and put the snot engines into high gear.

What does it mean when it’s yellow or green?

Mucus is clear when you’re healthy and have no serious invaders. However, when bacteria or viruses attack, it will turn yellow or green due to the influx of iron-containing enzymes including myeloperoxidases, other oxidases and peroxidases. These enzymes are used by white blood cells, namely polymorphonuclear granulocytes, to help ingest and deactivate bacteria through an oxidative process. The combination of dead white blood cells, used up enzymes and eaten bacteria, all of which still contain a fair amount of iron, results in the green or yellow color.

Notably, the longer snot stays in your sinuses, the greener it will get.

What does red or brown snot mean?

Blood, but not necessarily that much of it. When you blow a lot, the tiny blood vessels inside your nose can burst, causing a bit of bleeding to come out with your mucus.

What if it’s dark brown or black?

Smokers and coal miners often report black mucus, and people who are exposed to a fair amount of dust and dirt will frequently have a bit of brown in their snot. The color actually demonstrates that the mucus is working, catching those tiny particles before they have a chance to invade someplace really sensitive like your lungs.

How can I limit my mucus?

Antihistamines block the mechanisms that trigger snot production, but sometimes cause dizziness and headache. Likewise, decongestants and expectorants provide relief, but often have similar side effects as well as nausea.

More natural methods for phlegm reduction include inhaling steam (either with your head covered by a towel over a steaming pot or in a shower) and nasal rinsing like with a neti pot. Drinking plenty of fluids is said to help as well.