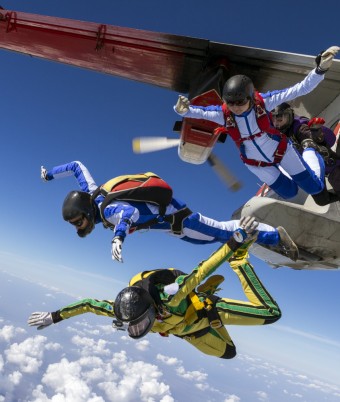 Seatbelts and airbags in cars save passengers lives. Parachutes save people who, for a variety of reasons, exit a plane in mid-flight. So why aren’t parachutes provided to passengers on commercial airline flights, in case of emergencies?

Because they almost certainly would not save anyone’s life.

When your average daredevil skydives for fun, the plane is typically travelling at between 80 and 110 mph when the skydiver jumps. Tandem and accelerated free fall (AFF) jumps occur between 10,000 and 13,000 feet, while static jumps can be as low as 3,500 feet.

Student divers choosing the easiest, tandem jump, where the newbie is physically and securely attached to an experienced instructor, are still required to undergo “a half hour of basic ground instruction.”

Braver neophytes who wish to fly untethered will have to endure:

Four to five hours of intense ground instruction, including learning body flight maneuvers and hand signals that instructors use to coach the student as they fly alongside.

For an AFF jump, although not harnessed together, freshman flyers are accompanied by two instructors who “hold onto the student’s harness until” it’s deployed.

Those who choose a static line jump also have to take four + hours of training prior to the jump, although the parachute is deployed as the rookie flyer leaves the aircraft.

When skydivers leave a plane, they do it alone or in small groups. When successive groups will be jumping, they try to keep separated by anywhere between 500 and 1500 feet; this is often accomplished by waiting until the preceding group is “back under the tail to 45 degrees behind the airplane” or several seconds in between groups.

Experienced skydivers can make even riskier jumps, although when descents begin at higher than 15,000 feet, “the risk of hypoxia and being significantly affected by altitude” increases dramatically and divers are less able “to make effective safe decisions at critical times.” Therefore, divers who jump from 15,000 feet or higher carry supplemental oxygen.

Further, each parachute weighs around 40 pounds and the equipment is expensive. To be fully outfitted with “rig, main, reserve, ADD, altimeter, jumpsuit, helmet [and] goggles” can run between $5,900 and $9,000.

Perhaps the most popular commercial jetliner is the Boeing 737 family. Its 737-800 can carry nearly 200 people (including the crew).

Although speeds can vary slightly, the 737-800 travels at approximately 600 mph when at its cruising altitude of 35,000 feet. Cruising altitudes are assigned by air traffic controllers and are usually up to 39,000 feet, except for longer flights that may fly higher.

Since four hours of training just to board a plane is unrealistic, passengers would have to read and execute detailed skydiving instructions including how to properly strap the chute on in order to benefit from the parachute. Not everyone is good at following detailed, technical instructions even when time and stress aren’t a factor.  In a situation where the plane is going down and one has only a moment to get the parachute properly strapped on (likely while keeping an oxygen mask firmly attached and perhaps also needing to keep the seat belt on to keep from being thrown about in the cabin), it’s unlikely most would be able to even get this far.

Every Man for Himself

Unless passengers wanted to fly suited up and tethered for a static jump, parachuting from a commercial airplane will be an AFF jump; however, unlike the conditions that students get – training and trained instructors to assist, commercial passengers will just have to learn as they go.

In addition, they will have to keep calm and proceed in an orderly fashion, which will require most to patiently wait their turn to exit. This is not likely to happen.

Adding just parachutes (not counting helmets, altimeters, etc.) for each passenger would add another 8,000 pounds or so to the flight’s weight. In addition, that equipment would take up space, that is already at a premium.

Parachuting Only Makes Sense if Something Happens in Mid-Flight

The only feasible time for people to jump from the plane is while it’s cruising. However, most fatal airline accidents occur on airplanes during takeoff and landing.

Consider that between 2003 and 2012, only 9% of all fatal accidents on commercial flights, seven total, occurred while the plane was cruising; moreover, at least one of those accidents happened as a result of wind shear or thunderstorm. This is a situation where parachuting is extremely dangerous even if you’re an expert.

So even if parachuting were feasible from a jetliner, the conditions in which parachutes could theoretically save lives are almost never apparent in fatal commercial accidents. But even if they were, it still wouldn’t be a good idea.

At 35,000 feet (three times higher than a typical jump) every passenger would need high altitude equipment (HALO) that includes an oxygen tank, mask and regulator, flight suit, ballistic helmet and altimeter just to manage the thin air. Or they could just pass out from hypoxia and wake up later, hopefully when the parachute automatically deployed at under 15,000-20,000 feet.

Of course, none of this would matter since the plane is moving so fast (600 mph), and it is so large, that many passengers would almost certainly smash into it and suffer debilitating if not fatal injuries.

Whole Plane Parachutes May Save Lives

There is hope, however. Over the past few years, many small planes have been equipped with whole-plane parachutes that slow the craft’s descent. As of late 2013, the largest planes equipped with these safety devices carry five people, but plans are in the works for putting them on larger crafts. As one manufacturer said, “There is no doubt that big commercial airlines of the future will be equipped with some kind of parachute recovery system.”