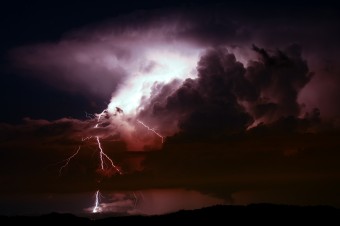 Cumulonimbus clouds, which often have something of a mushroom or anvil shape, tend to form in regions where there are extreme updrafts of air, which can form a dense vertical tower of cloud.  It’s not uncommon for cumulonimbus clouds to feature thunderstorms, hail, and other severe weather patterns.  They can range from a few hundred feet at the base to 75,000 ft. (22,860 m) at the top, though usually they aren’t nearly that tall, with their peaks more typically only reaching around 20,000 ft (6,096 m).  The taller the cumulonimbus cloud, the higher amount of updraft that will be experienced.

This is what Col Rankin found himself in as he was forced to eject when his engine suddenly quit and a fire warning light came on.  Unable to get the engine restarted, having lost all power, and having difficulty keeping his jet from going into a complete nosedive, he opted for ejecting, despite the extreme altitude and his lack of a pressure suit.  He did, however, have an oxygen mask, which had a limited oxygen supply.

With freezing weather (-50° C / -58° F where he initially ejected) within 10 seconds he hit the top of the near 47,000 ft. (14,325 m) tall cumulonimbus tower, where he met with severe winds, lightning, hail, rain, and dense, black clouds all around him. This is not to mention that the sudden decompression was causing swelling in his abdomen and bleeding from his eyes, nose, ears, and mouth, among other problems.

After falling for five minutes with only a few feet of visibility within the cloud, he began to think that his parachute’s auto-deployment system must have malfunctioned, as it was supposed to deploy at 10,000 ft (3,048 m) and normally he should have hit that level by now.  Eventually it did kick in and his parachute deployed… the problem was, he wasn’t at 10,000 ft. despite the length of time he’d been falling.  The barometric switch that deploys the parachute automatically had been fooled by the violent weather conditions in the storm, triggering it early.

This probably wouldn’t have mattered much because even if it had deployed at 10,000 ft., he would have been sucked back up with the updraft, as he was anyways.  The cloud suck was so violent that every time he’d reach the apex of the upswell, his body would continue up, even as the parachute stopped, so he’d hit the fabric in his parachute, only then to fall for a time and have the cycle repeated.  From being violently tossed about, Rankin said, “At one point I got seasick and heaved.”

During these up and down cycles, lightning was striking around him and hail battering him from every direction.  “Boy, do I remember that lightning. I never exactly heard the thunder; I felt it.”  One lightning strike not far above his parachute, lit it up and he thought the lightning had actually struck the chute itself.  His limbs became frostbitten and the water vapor was so thick at times, he choked on it as he tried to breathe- when it was most severe, he thought he was going to drown.  During these times, he attempted to hold his breath… not a safe practice when ascending rapidly.

When he finally broke through the bottom of the cloud, a few hundred feet above the ground, he’d been in the cumulonimbus tower for about 40 minutes.  He initially was descending towards a clearing when a gust of wind came up at the last minute and threw him into a patch of trees- a last little present from the storm- where his parachute became tangled in the branches and he smacked his head right into the trunk of one of the trees, though he was of course wearing a helmet.

Once he’d freed himself from the tree, he hiked along until he found a road and attempted to hitch a ride.  This turned out to be easier said than done, as his vomit covered, bloody, ripped up, rain soaked flight suit hardly endeared drivers to pick him up.  Eventually someone did stop up and took him to a payphone where he was able to call for an ambulance, spending the next few weeks in a hospital recovering from frostbite, severe decompression effects, and numerous welts and bruises all over his body, but otherwise suffering no long term damage from the ordeal.  Up to that point, he was the only known person to parachute through a cumulonimbus tower and survive.