What Time Zones are the Poles In?

October 31, 2016 Melissa
James H. asks: What time zones are the North and South pole in? 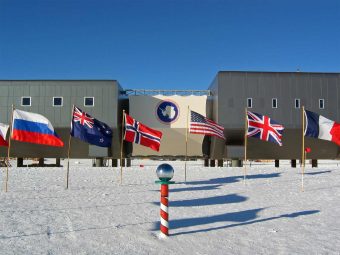 Given that they are every possible hour all the time, or more aptly technically in every time zone, it may come as no surprise to you that there are no official time zones at the poles. Nevertheless, groups working at or visiting the poles still have a need to keep track of and coordinate time, so what do they use?

To begin with, some choose to synchronize their watches with the closest or last point of civilization. For example, the U.S. research center on Antarctica, McMurdo Station, uses the time zone of Christchurch, New Zealand, as it is the last (or first) city most travelers to and from McMurdo pass through and where they get most of their supplies from.

Other bases use the time zones of their home countries, while still others just go with Coordinated Universal Time (UTC), the successor to Greenwich Mean Time (GMT), the latter of which is no longer defined precisely but in a practical sense is somewhat interchangeable with UTC.

As for those of us not at the poles, we also rely on UTC, and we express our time of day as a function of how far we are from Greenwich, but it wasn’t always this way. So how did the time zone system we use today come to be?

Prior to standardization, there were thousands of local times all around the world, generally based on the Sun’s position at a given time. However, even after clocks became somewhat commonplace, two cities a short distance apart sometimes had very different ideas about what time it was at any given moment. Usually, the accepted time for a given city was based on a well-known clock in the town, like a clock tower, which in turn was often at least partially based on the Sun’s position. This lack of any definitive standardization wasn’t much of a problem because most people never strayed very far from home.

However, once people started to travel large distances en masse, establishing a universal time became more important; in addition, in 1675 the GMT was invented at the Royal Observatory at Greenwich, and although its original purpose wasn’t just to standardize time (it was to determine longitude at sea), people soon saw the value.

As transportation and communication continued to advance, the need to have standard timekeeping became increasingly apparent. As such, in 1840, the Great Western Railway in Great Britain adopted GMT as the standard for its schedule, and by 1847, all British rail companies were using GMT, which was also called Railway Time.

The Royal Observatory began telegraphing time signals in 1852, and by 1855, 98% of the public clocks in Great Britain were displaying GMT, either alone or in conjunction with local time.

This brings us to the latter half of the 19th century. Although others came before him, most credit Sir Sandford Fleming with being the instigator of a single, worldwide system of timekeeping. And while his particular proposals were not enacted, his basic idea of having a universal day beginning at Greenwich was ultimately adopted at the International Meridian Conference in 1884; there the conferees decided that the line of longitude that passed through Greenwich would be the prime meridian where each universal day would begin at midnight. (Note: astronomers preferred to use GMT starting at noon, rather than midnight.) As for why it is called “Greenwich Mean Time,” this is because the Earth’s daily rotation time is slightly irregular, causing a variance of about +/- 16 minutes. To resolve this issue, the mean time is used.

Over the next decade, local time zones that had been established in previous eras, were, for the most part, discarded in lieu of a single, international system of 24 time zones that ultimately came to be called Coordinated Universal Time.

Americans, however, were slower to standardize, but more or less saw the same progression as happened across the pond. As had once been the case in Europe, in order to get some semblance of standardization from town to town, railroad companies simply set their own times, which differed from company to company and in this case usually were based on whatever the time was at the company’s headquarters. This included using their own headquarters’ time for arrival and departure announcements at train stations across North America.

Obviously this was amazingly confusing for people trying to ride by train, particularly in major train stations that several different companies used.  For instance, in Pittsburgh, the major train station hub there in the mid to late 19th century had six different companies running through it, using six different time systems.  In order to figure out arrival and departure times, you’d have to check which company owned the train, then look at what their clock said.  If your travel plans were at a much later date, you’d also have to figure out and remember how their time related to your time in order to make sure you showed up at the train station at the correct time.

Needless to say, this all needed fixed.

Although others had suggested various versions of time zones for America earlier, it was William F. Allen’s proposal that was adopted by the rail system on November 18, 1883. Called The Day of Two Noons, every railroad station clock was reset to reflect the new time zones, which were designated Intercolonial, Eastern, Central, Mountain and Pacific.

Quite different from those we have today, the borders of Allen’s time zones went through railroad stations, often in major cities; for example, the border between the Central and Eastern time zones passed through Atlanta, Charleston, Pittsburgh, Detroit and Buffalo.

This mess was finally straightened out when Congress passed the Standard Time Act in 1918, which established a single, standard system of timekeeping for the entire country, not just the railroads, and designated its five time zones by reference to the Greenwich meridian, finally officially catching up with many countries in Europe in this respect.

Other countries were similarly adopting standard time zones also referencing Greenwich, and although most major countries had done so by 1929, the last nation to do it, Nepal, waited until 1986.

To set their time zones, most countries simply offset time in hour increments, according to their distance from Greenwich; for example, Eastern Daylight Time (EDT) in the U.S. is expressed in universal time as UTC-4. Some places, however, including India, Iran, Afghanistan and parts of Australia, use a half-hour offset; so, for example, the Canadian province of Newfoundland has as its standard time UTC-3:30. Moreover, some places even use quarter-hour offsets, such that Nepal Standard Time is UTC+5:45. Also, notably, while most time zones are 15 degrees of longitude (360 / 24 = 15), some countries, like China, ignore that limitation and have a single time zone for the entire nation.