June 1, 2016 Melissa
Nathan B. asks: Why is the standard to have handed clocks turn clockwise? 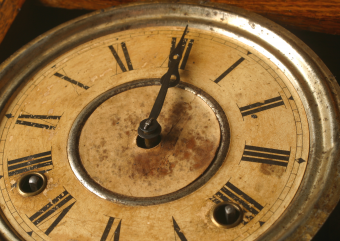 Pretty much everyone knows that if you’re asked to pass something clockwise around a table, you hand it to the person on your left because that is the same direction that the hands of a clock move. But what you may not know is that this standard direction is a function not only of timekeeping, but the Earth’s rotation and the happy accident that much of human civilization evolved in the Northern Hemisphere.

If you could look directly at the North Pole from space, it would appear to spin counterclockwise. Given that spin, when a stick is placed in the ground parallel to the Earth’s axis in, say, Egypt, the shadow cast by the stick as the Sun moves across the sky will move in a clockwise direction (notably, a similarly placed stick in Australia would cast a shadow that moves counterclockwise).

As far back as when the ancient Egyptians and Babylonians were fashioning their first shadow clocks (~3,500 BC), the measurement of time moved in a clockwise direction. Even as more precise timekeeping methods came about, sundials (which began in earnest around 1,500 BC) remained popular throughout the middle ages and beyond, given their simplicity of construction and relative reliability. (In fact, early mechanical clocks were often regularly calibrated to nearby sundials.) 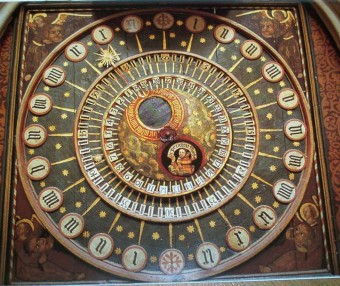 One of the earliest mechanical clocks, the Wells Cathedral Clock in Somerset, was wound by hand from its installation in the late 14th century to 2010, when an electric motor was installed, saving someone having to climb the steps and wind it (~800 revolutions per winding) three times per week.

So, when mechanical clocks were introduced in Europe in the 14th century, their inventors were quite familiar with sundials and the clockwise direction that their shadows moved and marked time. Accordingly, by the end of that century when even cathedral clocks were sporting clock faces, they were made in imitation of their sundial forbears, which included hands that moved in a clockwise direction.

Notably, the word clockwise with its present meaning did not appear in English until the 1870s, with counterclockwise also dating to that decade.

The use of wise to mean a way of proceeding dates back to Old English. Clock isn’t nearly so old, and dates to the invention of our modern mechanical clocks (14th century). It is thought to come from either clokke (Middle Dutch), cloque (Old North French) or clocca (Medieval Latin) which all meant bell. Some of the earliest mechanical clocks were simply designed to strike a bell at set intervals, perhaps to announce prayer times or the like, or simply ring on the hour, with these early clocks not necessarily having any faces. And if you’re curious, before they were called “clocks,” these early mechanical clocks were called horologia, from the Greek for “hour” (ὡρα) and “to tell” (λέγειν).