The Only Peaceful Continent- The Antarctic Treaty 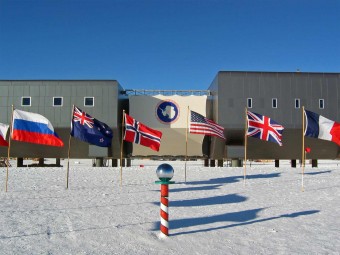 In the midst of the Cold War, it can be easy to think the United States and the Soviet Union would be unable to come to an agreement on anything. Yet they, and ten other countries gathered in Washington, D. C. in 1959 to successfully negotiate the Antarctic Treaty, which not only encouraged international cooperation with the goal of scientific study, but it also expressly forbid war in any form from being waged on the continent of Antarctica.

While humans have hypothesized the existence of Antarctica at least as far back as the ancient Greeks, the first time we laid eyes on the Antarctic mainland wasn’t until 1820, though James Cook is thought to have come within about 150 miles of it in 1773. No one knows for certain who spotted the continent first as the sightings all occurred within a very short period of each other, but it’s generally accepted that the three expeditions that “first” spotted the main land were led by Captain Edward Bransfield of the Royal Navy, American sealer Nathanial Palmer, and Captain Fabian Gottlieb von Bellinghausen of the Russian Imperial Navy.

Whoever was really first, exploration of Antarctica tapered off during the middle of the 19th century only to experience a resurgence in what is known as the Heroic Age of Arctic Exploration which resulted in Norwegian Roald Amundsen leading the first successful group to reach the South Pole on December 14, 1911.

Territorial claims on the land began as early as 1908 with seven countries making claims between then and 1943. Those countries were Argentina, Chile, Australia, the United Kingdom, New Zealand, Norway, and France. Claiming territory might not be a big deal when countries recognize each other’s claims, but as the many wars humans have fought over the centuries attest, it can be problematic when those claims overlap. That was the case for Chile, Argentina, and Great Britain.

When Britain proposed the three countries argue their cases with the International Court of Justice in both 1947 and 1955, Argentina and Chile refused. It was then suggested that those with an interest in the continent put aside their differences and have joint control over the continent. Other proposals brought before the countries of the United Nations tried to create an international agreement for governing Antarctica and even create a UN trusteeship. But they all failed to gain traction. 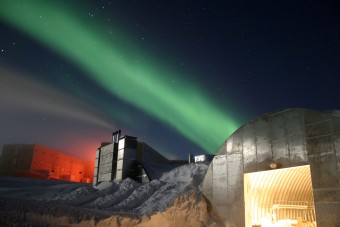 It was the International Geophysical Year (IGY) that provided the impetus for international cooperation in Antarctica. The IGY spanned eighteen months starting in 1957 where twelve countries carried out major scientific research on Antarctica. These countries consisted of those seven with territory claims on the continent, along with the United States, Soviet Union, Japan, Belgium, and South Africa. The IGY was such a success that the United States invited the participating nations to Washington, D.C. from October 15 to December 1, 1959. This meeting- the Conference on Antarctica- concluded with the creation of the Antarctic Treaty. It went into effect in 1961 after being ratified by all twelve countries.

The Antarctic Treaty outlined protections for the continent and effectively halted tensions over territorial claims. While the treaty does not force any country to give up its right to territorial claims or deny sovereignty over that land, it prevents member countries from asserting those claims via any non-peaceful activities.

The preamble states: “… it is in the interest of all mankind that Antarctica shall continue forever to be used exclusively for peaceful purposes and shall not become the scene or object of international discord.”  Article 1 drives home the requirement for peace by forbidding any military action, bases, and weapons testing. Article V even prohibits nuclear explosions and the disposal of nuclear material on the continent, effectively eliminating nuclear testing or direct pollution in Antarctica.

The treaty also addresses the continuation of scientific research, stating “Freedom of scientific investigation in Antarctica and cooperation toward that end … shall continue…”  It goes a step further by requiring the signatory countries to inform the others when conducting scientific studies and to freely share information. In order to partially facilitate this and ensure everyone on the continent is actually focused on science, the treaty allows each country to observe and inspect the facilities and equipment of any of the others.

The Antarctic Treaty has since grown to include other agreements, collectively known as the Antarctic Treaty System (ATS), and so has the number of members. In 2015, there were fifty-three countries belonging to the ATS with interests in scientific research in Antarctica.