How the Practice of Putting Candles on Cakes for Birthdays Started

November 1, 2016 Melissa Leave a comment
Heily O. asks: How did the tradition of having cakes with candles on them for birthdays start? 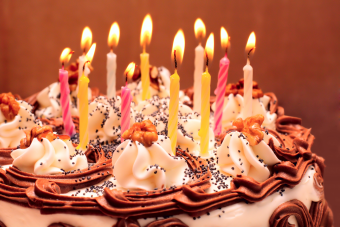 For most of human history, ordinary people’s birthdays weren’t cause for much celebration. In fact, in the ancient world if you weren’t among the elite, odds are your birthday would have mostly just been noted for things like astrological purposes, rather than throwing parties in your honor annually.

One of the commonly cited “first” known instances of something like a birthday being celebrated appeared in the book of Genesis (40:20-22),

21 And he restored the chief butler unto his butlership again; and he gave the cup into Pharaoh’s hand:

22 But he hanged the chief baker: as Joseph had interpreted to them.

However, according to Dr. James Hoffmeier of Trinity Evangelical Divinity School, this “birthday” party was probably not celebrating the unnamed pharaoh’s literal “birth” day, but rather his coronation, which marked his “birth” as a god. Whatever the case, candles and birthday cakes as we think of them were not a thing at this party as far as we know… perhaps in no small part because he had his baker hanged…

As for slightly better documented history, we know from the Greek historian Herodotus that in the 5th century BCE at least some Persians celebrated their birthdays, possibly even eating some form of sweetened cake due to their practice of eating an “abundance of dessert”-

Of all the days in the year, the one which they celebrate most is their birthday. It is customary to have the board furnished on that day with an ampler supply than common. The richer Persians cause an ox, a horse, a camel, and an ass to be baked whole and so served up to them: the poorer classes use instead the smaller kinds of cattle. They eat little solid food but abundance of dessert, which is set on table a few dishes at a time; this it is which makes them say that “the Greeks, when they eat, leave off hungry, having nothing worth mention served up to them after the meats; whereas, if they had more put before them, they would not stop eating.”

As for the Ancient Greeks themselves, while not connected to a birthday, we do know they served some form of cake with candles to honor Artemis, the goddess who, among other things, had dominion over the Moon. As such, people offered cakes that were not only shaped like said celestial object, but decorated with lit candles, presumably to make it glow. It has also been reported that the smoke of the candles perhaps was thought to help the goddess hear an individual’s prayers as it ascends to the heavens.

Like the Persians, the Romans (circa 2nd century BCE – 5th century CE) are known to have celebrated the birthdays of at least some “commoners,” although it doesn’t appear that the custom was as ubiquitous as it is today. Rather, when a wealthy person reached a major milestone like 50, his family and friends might throw the individual in question a party and serve a special sweetened cake. Despite that the Romans had dipped candles made from tallow going all the way back to around the 5th century BCE, it does not appear that they put candles on the birthday cakes, however.

The Chinese likewise have long had birthday celebrations, though eating cake on said day has only been an exceptionally recent phenomenon, adopted from the Western world. Instead, in China it is traditional to eat longevity noodles on one’s birthday.

During the Middle Ages in the Western world, beyond record keeping not exactly being a priority of the time in this region, it appears birthdays and birthday cakes were not too prevalent, in no small part because of early Catholic dogma that considered birthday celebrations to be pagan heresy.

Things began to change on this front beginning around the 12th century, when records of common births were again being meticulously noted. As babies were also honored with the name of a saint to protect them, people began celebrating their saint’s day (as opposed to their own birthday).

As for re-introducing the birthday cake, this is seemingly thanks to German bakers starting around the 15th century. At this point, they began marketing single-layer cakes for birthdays, especially for one’s first birthday.

By the end of the 18th century, besides the Western world again starting to somewhat commonly celebrate birthdays, the Germans had evolved their birthday cake a bit, including the very wealthy sometimes ordering elaborate, frosted birthday cakes not that different from what we have today. Pertinent to the topic at hand, the Germans were also now putting candles on the birthday cakes, as seen in their Kinderfeste (children’s festival) birthday parties.

As to who came up with the idea of including these candles and why they put them there, this isn’t clear, though it is known that at this point they were adding candles numbering at least the years the child had been alive plus often more in the hope of a long life to come. Thus, it has been speculated that the impetus for the candles was to represent the “light of life.” Other speculative claims state more pagan-like origins, such as that the candles were there to protect the child from evil spirits and that the parties themselves were for grouping together in hopes of fending off evil spirits, with the anniversary of one’s birth supposedly making a person more vulnerable to said spirits.

Whatever the case, the idea of putting candles on birthday cakes seems to have quickly spread beyond children’s birthday parties. For instance, in 1746 Count Nikolaus Ludwig von Zinzendorf had “a Cake as large as any Oven could be found to bake it, and Holes made in the Cake according to the Years of the Person’s Age, every one having a Candle stuck into it, and one in the Middle.”

A half century later in 1801, Prince August of Saxe-Gotha-Altenburg was reported by Johan Wolfgang von Goethe of having on his 52 birthday “a generous-size torte with colorful flaming candles – amounting to some fifty candles – that began to melt and threatened to burn down, instead of there being enough room for candles indicating upcoming years, as is the case with children’s festivities of this kind.”

From here this practice of ornate, candled cakes for one’s birthday spread throughout Europe, presumably initially with the elite of the continent copying one another and it filtering down to those who could afford it from there.

As for the United States, primarily for religious reasons, celebrating birthdays at all didn’t become widely popular until the early 19th century. Notably while Protestants were coming to embrace the idea of a birthday at this point, Catholics in the country still largely had religious issues with celebrating the anniversary of one’s birth.

It should also be reiterated that at this stage having sweetened cake on one’s birthday, particularly multi-layered, frosted ones as we often see today, was still something of an expensive luxury only the affluent could afford. It wasn’t until the end of the 19th century that ordinary people had sufficient funds, and ingredients were cheap enough thanks to the industrial revolution, that the masses began incorporating enriched, frosted birthday cakes as part of a birthday celebration.

When this happened, the idea of a candled cake and party on one’s birthday became nearly ubiquitous in the Western world, as it is today, save for some who still abstain from the practice for religious reasons.

So in the end, while the tradition of putting candles on cake and serving it on one’s birthday may seem like a timeless practice, this is actually a relatively modern phenomenon in human history.