May 31, 2016 Melissa
Jillian E. asks: In the beginning of books on the page where they say who published the book and stuff there is a string of numbers that count to 10. I was just wondering why they put that there? Thanks! 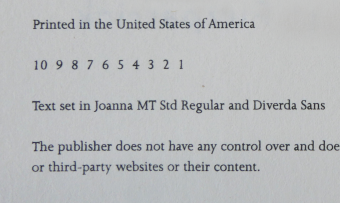 The number line, or printer’s key, often seen on the copyright page of books is simply a method of record-keeping that helps identify the book’s printing and, for some, year of printing a specific book, which may or may not be different than the original copyright date listed elsewhere on the page.

Common examples of these number lines include:

The reason they remove a number each time instead of, say, just changing one number has to do with the way publishers have historically printed books.  For instance, in offset printing (see our article which covers offset printing- How Do They Get the Ms on M&Ms?), you can relatively easily remove something from the printing plate, but adding a number would require creating a whole new plate.

In any event, sometimes number lines are accompanied by the words First edition but that does not necessarily mean it is the first printing; for example, this would indicate a third printing of a first edition:

There may be many printings of an edition, the latter of which may be defined as a single “setting-up of type without substantial change.” So, if the author doesn’t change the text of the book (like text books authors frequently do), and the pages all stay the same, then if the publisher simply makes another round of copies, it isn’t a new edition, it’s just a new printing.

If, however, the pages are substantially modified, or the book is reformatted, such as for printing in paperback, then the printings in this new format will be a new edition. Note, though, that it may not be designated as a second edition (or third or fourth), and instead may be called a first paperback edition, first US edition or Penguin Classics first edition. Serious collectors typically consider these last inferior to the cherished first edition, first printing.

Depending on the publisher, the number line might also indicate the year the printing was done, like 2 3 4 5 6 93 92 91 90. This reveals that this second printing was done in 1990. Much like with the print run numbers, if the book is printed again the following year, the 90 would be removed, leaving the year part of the string as 93 92 91.

Moreover, if the publisher contracts with an outside company to do the printing, that company may be indicated in the number line as well; in this example, the number line shows Melissa’s Printing Company was hired to do a third printing in 2016: 3 4 5 6 7 8 9 10 MPC 19 18 17 16.