Why are Bibles Printed With the Text in Two Columns Instead of One?

April 18, 2016 Samantha
Louis R. asks: Why do they always print bibles with two columns on the pages instead of like a normal book? 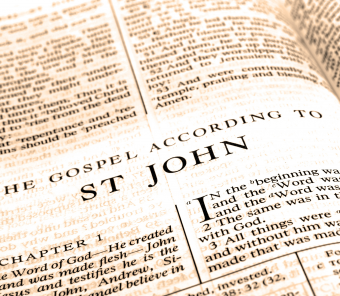 The practice of using two columns with compact texts dates back to at least the fifteenth century, which in turn was just a continuation of an older tradition of narrow columns in horizontally opened scrolls. Both the Gutenberg Bible and the original King James Version (see: How the King James Bible Came About) used two columns, and many Bibles are still printed this way today. But why?

In part, this is simply tradition, as mentioned first being borrowed from the scrolls which the Biblical text was copied from. Today, many people have come to expect Bibles to have two columns and can’t imagine one with any other layout. But there’s a little more to this formatting choice than just tradition.

The decision of how to format a book depends highly on how that book is intended to be read. The single column format with larger fonts in a novel limits distractions and creates a good readable flow of text, allowing an individual to read a story from beginning to end with limited fatigue. On the other hand, reference books, such as dictionaries and encyclopedias, break up the text by using multiple columns and providing pictures, annotations, and a numbering structure that help improve efficiency when using a book for perusing various specific topics.

Clearly the standard two column layout of the Bible more closely resembles that of reference books than novels. One can see how this might have appealed to clergy who, historically, were the ones who actually read/studied the Bible, with many among the laity unable to read anyway, even if they had access to such a physical text. The two column approach allowed for more easily starting each numbered verse on a new line so it could be quickly referred to and identified. In addition, some Bibles also contain page by page reference guides, allowing readers to skip through the text to find similar passages that could potentially help them gain a deeper understanding of the original verse read.

But there are actually much more practical reasons reference books go with the two column approach, namely using as few pages as possible. The Bible is a massive text with, for instance, almost eight hundred thousand words in the standard King James Version. In order to reduce the number of pages used, a much smaller font is used than a typical novel would have.

While this does significantly reduce the number of pages that need to be bound in the book, it also makes it difficult to read.  With Bible font sizes often less than 10 pt, in a one column format this could mean as many as 16-20 words per line, rather than the more typical 9-12 that is generally considered approximately optimal for readability. To get around this problem, as with most reference books, the text is simply split into two columns, making it a little easier to read given the small font size. The net benefit of all this is a reduction of total pages by approximately 10%-25%, providing a significant cost savings in production, particularly historically.

Of course, today with production costs being much cheaper per page, some have begun to argue that treating the Bible like a reference work isn’t always appropriate, particularly when trying to get the general public to actually read it, since the information included in the scriptures is meant to be more than mere facts and historical references and more about gleaning spiritual insight into how to live one’s life in accord with scripture. If people aren’t bothering to read it at all because it reads a bit like a dictionary, it ends up not being that effective.  As J. Mark Bertrand of Bible Design notes,

The reason why paragraphed texts are important, and why single column settings should be more widely available, is that they both encourage the proper way of reading the Bible. Rather than treating it like a pithy, cryptic phrasebook, these formatting options suggest contextual reading that focuses on the ideas behind the words rather than free-association based on a word here or there…

In the same way that a translator, to do good work, needs to consider both the source language and the one the audience speaks, a Bible designer has to do more than fit words on the page or figure out how to distinguish cross references from verse numbers. The designer has to think about the reading experience and avoid choices that might channel it into counterproductive paths. Sadly, other considerations have often predominated. As a result, it’s easy to find a Bible that looks like a dictionary — book for looking things up — and hard to find one that looks like it’s meant for reading.

This idea has led to a relatively recent trend of publishing one column, larger font Bibles (like these ones) with significantly less ancillary markers and information crammed in. Essentially, many of these new one column versions format the Bible very much like a typical novel to make it much easier for people to read the scriptures from beginning to end. And for anyone who has read one of these, it certainly is surprisingly effective at its goal, though of course has the major drawback of being less functional as a reference text and in some cases, depending on exact formatting choices, requiring the complete Bible to be broken up into multiple physical books to keep the thickness and size to reasonable levels.