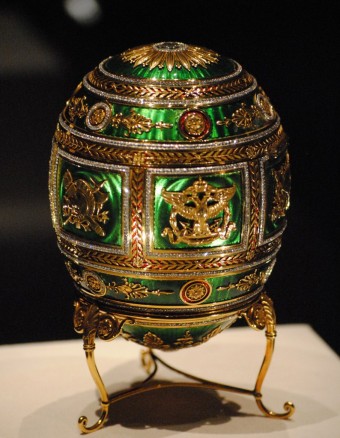 Unless you happen to be a Russian history buff, you probably don’t know much about Czar Alexander III. But if you’re a fan of Fabergé eggs, you have him (and Carl Fabergé, of course) to thank for them.

In 1885 the emperor, or czar, of Russia, Alexander III, placed an order with his jeweler for a decorative Easter egg for his wife, the czarina Marie Feodorovna. Alexander had given his wife jeweled Easter eggs before: Easter was the most important holiday on the Russian Orthodox calendar, and eggs were traditionally given as gifts. But this year’s egg would be different, because Alexander placed his order with a new jeweler: 38-year-old Carl Fabergé.

Fabergé differed from other jewelers who served the Imperial court in that he was more interested in clever design and exquisite craftsmanship than in merely festooning his creations with gold and precious gems (though his eggs would have plenty of those) without showing much imagination. “Expensive things interest me little if the value is merely in so many diamonds and pearls,” he said.

That first Imperial Easter egg was very plain indeed, but only on the surface: known today simply as the 1885 Hen Egg, it was 2½ inches long and made of gold but had a plain white enamel shell to give it the appearance of an ordinary duck egg. When the two halves of the egg were pulled apart, they revealed a golden yolk that in turn opened to reveal a golden hen “surprise” sitting on a nest of golden straw. The hen was hinged at its tail feathers and split open to reveal a small golden replica of the Imperial crown; hanging from the crown was a tiny ruby pendant that Marie Feodorovna could wear around her neck on a gold chain that came with the egg.

Marie Feodorovna loved the egg, and for the rest of his life, Czar Alexander bought all of her Easter eggs from Fabergé. Alexander gave the jeweler great latitude in designing the eggs and set only three requirements: 1) the eggs had to be egg-shaped; 2) they had to contain a surprise; and 3) Fabergé’s designs could not repeat themselves. Those three requirements aside, Fabergé was free to do whatever he wanted. The jeweler made a point of not revealing anything to Alexander about each egg until he delivered it a few days before Easter so that the czar could enjoy the suspense as well. “Your Majesty will be content,” was all he’d say.

Not much is known about the second egg, Hen with Sapphire Pendant, which Fabergé made for 1886; it disappeared in 1922. For his third egg, in 1887 Fabergé made a golden egg not much larger than a hen’s egg. It sat on a gold pedestal with three lion’s paw feet. Pressing a diamond on the front of the egg caused its lid to pop open, revealing a ladies’ watch face inside. The watch was mounted on a hinge and could be tilted upright, allowing the egg to be used as a clock. (More on this egg, which was missing for 90 years, in an article next week.)

In the years that followed, the eggs produced in Fabergé’s workshop became larger and more elaborate as teams of craftsmen worked the entire year, sometimes longer, to complete the eggs. The Danish Palaces Egg for 1890 contained a folding screen comprising 10 miniature paintings of the palaces and royal yachts that Marie Feodorovna, a Danish princess, remembered from her childhood. The 1891 Memory of Azov Egg contained a gold and platinum model of an Imperial Navy ship of the same name, which had taken the future czar Nicholas II and his brother George on a tour of the Far East in 1890. The egg was carved from solid bloodstone (green quartz speckled with red), and the model inside was an exact replica of the Memory of Azov and floated on a blue sea of aquamarine. The ship was accurate down to its diamond portholes, movable deck guns, and tiny gold anchor chain.

TWO OF A KIND

If Fabergé feared losing his best customer when Alexander III died in 1894 at the age of 49, he needn’t have worried. When Alexander’s son Nicholas II came to the throne in November 1894, he doubled the order to two eggs each year: one for his mother, Marie Feodorovna, and one for his wife, the czarina Alexandra. He bought them every year except 1904 and 1905, when the purchases were suspended during the Russo-Japanese War.

Nicholas didn’t let the outbreak of World War I in 1914 stop him from buying Easter eggs, though the wartime eggs were more modest and subdued in design. Both eggs for 1915, for example, had Red Cross themes. He bought two each year until he was forced to abdicate his throne during the Russian Revolution of 1917. By then Fabergé’s workshop had produced 50 Easter eggs for the two czarinas (plus another 15 for other wealthy customers, including England’s Duchess of Marlborough and the Rothschild banking family).

Czarina Marie Feodorovna managed to escape to England, but Nicholas, Alexandra, and their children were not as lucky. They were executed by revolutionaries in the summer of 1918. Carl Fabergé escaped to Switzerland, where he died in 1920. In the chaos of the revolution and the civil war that followed, the royal palaces were ransacked, and any property not looted by mobs was seized by the provisional government and, when it fell, by the Bolsheviks led by Vladimir Lenin. The Fabergé eggs disappeared in the turmoil, some of them never to be seen again.

Considering how much Fabergé eggs sell for today, it’s remarkable how little they fetched when they first hit the market. But in an age when people like Pablo Picasso and Henri Matisse were stirring up artistic revolutions of their own, the eggs were seen as gaudy, old-fashioned, and vulgar. Museums and most “serious” collectors weren’t interested in them, and for this reason, the earliest buyers were able to snap them up for very little money—in some cases paying only a fraction of what it had cost Fabergé to make them in the first place.

Alexander Schaffer, an American dealer of prerevolutionary Russian artwork, bought the 1903 Peter the Great Egg (a gift from Nicholas II to his wife, Alexandra) from the U.S. Customs Service for about $1,000 ($13,500 today), after the original buyer balked at having to pay import duties. Other dealers thought Schaffer was nuts to pay even that much. In 1930 American businessman Armand Hammer bought 10 eggs for prices ranging from $240 ($3,200) for the 1915 Red Cross Egg to $3,900 ($53,000) for the 1912 Czarevich Egg, both gifts from Nicholas II to Alexandra.

If Hammer hoped to sell his eggs for a quick profit, he was soon disappointed. It took him more than a decade to sell them all, though he did make a bundle. He, Schaffer, and other dealers unloaded their wares on nouveau riche collectors with more money than taste—people like Lillian Thomas Pratt, the wife of a General Motors executive, who bought the first of five Fabergé eggs in 1933. She probably would have bought even more than that had her husband not threatened Armand Hammer with a lawsuit if he sold her any more.

The Post breakfast cereal heiress Marjorie Merriweather Post bought two Fabergé eggs: the 1896 Alexander III Portraits Egg and the 1914 Catherine the Great Egg, both of which were gifts from Nicholas II to his mother. In the 1950s, the Swingline stapler tycoons, Jack and Belle Linsky, amassed a huge collection of Fabergé objects that included the 1893 Caucasus Egg and the 1894 Renaissance Egg, both gifts from Czar Alexander III to his wife, Marie Feodorovna. But when the Linskys showed their prized collection to the director of New York’s Metropolitan Museum of Art, he dismissed the objects as “turn of the century trinkets” and suggested that the couple direct their energy toward “more serious collecting.” The Linskys took his advice and sold every piece of Fabergé they owned.

I AM THE EGG MAN

That the Linskys and other early collectors would come to regret selling their Fabergé eggs too soon and for too little money was due almost entirely to the buying habits of one man: Forbes magazine publisher Malcolm Forbes. He bought his first Fabergé egg, the 1902 Pink Serpent Clock Egg, in 1965. (The egg, then thought to have been one of the Russian Imperial eggs, is now understood to have been commissioned by the Duchess of Marlborough, Consuelo Vanderbilt.) Forbes paid $50,000 for the egg, triple the preauction estimate and a record for a Fabergé egg. He bought his second egg, the 1894 Renaissance Egg, later that same afternoon. In the 15 years that followed, just about every time a Fabergé egg came up for sale, Forbes paid whatever was necessary to add it to his collection. By 1985 he’d pushed the price to nearly $2 million per egg, when he paid $1.7 million for the 1900 Cuckoo Clock Egg.

In February 1990, Forbes died from a heart attack at the age of 70. By then he’d acquired nine Russian Imperial eggs plus three eggs that Fabergé made for other wealthy clients, along with another 180 smaller objects produced in Fabergé’s workshop. The publisher’s death raised an interesting question: Would the eggs hold their value now that he wasn’t there to outbid every other buyer?

In 1992 Forbes’s children passed on the chance to add a tenth Russian Imperial egg to the family collection when the 1907 Love Trophies Egg came up for auction and they didn’t even bid on it. The egg sold for $3.2 million anyway. When the 1913 Winter Egg came up for auction in 1996, they passed again. It sold for $5.6 million…and then for $9.6 million when the new owner put it up for auction in 2002. When the Forbes children decided to auction off their father’s Fabergé collection at Sotheby’s in 2004, a Russian billionaire named Victor Vekselberg swooped in before the auction could be held and bought the entire collection for an undisclosed price estimated to be well over $100 million, pushing the price per egg to around $10 million. Could the value possibly go any higher? Of course. When a Fabergé egg made for the Rothschild banking family went up for auction in 2007, it sold for $18.5 million.

As of 2015, 43 of the 50 Russian Imperial Easter eggs have been found; the other seven are missing. Some may be casualties of either the Russian Revolution, the civil war that followed, or World War II. But others are almost certainly out there. The Third Imperial Egg of 1887, for example, only surfaced in 2004, when a scrap dealer in the American Midwest bought it at an antique sale. Nearly a decade passed before he even realized what it was. More on this next week.