That Time the British Developed a Chicken Heated Nuclear Bomb 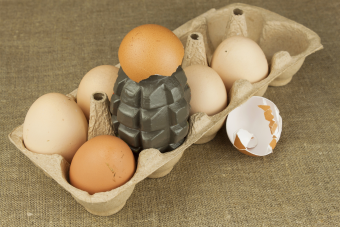 Imagine it’s 1957 and you’re a high-ranking official with the British Army, responsible for keeping the West free from Soviet aggression. At your disposal you have a great arsenal, both conventional and nuclear, as well as teams of brilliant scientists at the Royal Armament Research and Development Establishment constantly proposing ideas for new, more effective weapons.

One of your areas of greatest strategic concern is the possibility that the Soviet Union might make inroads sufficiently into Western Europe to bring its advanced rockets and bombs within range of the British Isles. Recall that during World War II, Germany bombed the snot out of Britain with tens of thousands of bombs dropped from Luftwaffe aircraft, as well as more than 10,000 long-range V-1 and V-2 cruise and ballistic missiles shot from sites in France and the Netherlands.

Deciding that the best way to keep the Soviets from your doorstep is a scorched earth policy, to “deny occupation of the area to an enemy for an appreciable time,” you choose from all your options that blowing any invaded areas in West Germany to smithereens using nuclear weapons is the best alternative.  After all, this not only destroys enemy troops and denies them access to valuable infrastructure, but also makes the area around the explosion uninhabitable for some time after.

Not content to rely on gravity bombs or missiles, your crack team concludes that nuclear landmines (that could either be placed on the surface, buried or even submerged in rivers and lakes) are the way to go.

You settle on a 16,000 pound tub that resembles an enormous boiler from the outside, but inside hosts a large nuclear warhead and two firing units, with the design partially based on your country’s first operation nuke- the Blue Danube. With a predicted yield of ten kilotons, each bomb would create an estimated crater of 375 feet across for a surface blast and 640 feet if detonated 35 feet below ground. Versatile, the device could either be detonated by timer (capable of being set as far as eight days in advance), directly with a wire from up to 3 miles away, or simply detonated automatically if any of several anti-tampering devices were activated. 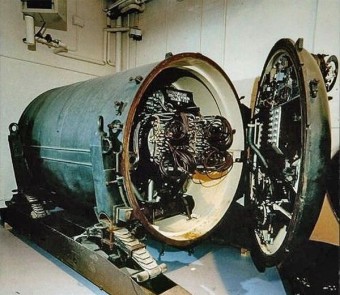 This is exactly what happened. In July of 1957, the British Army Council order 10 of these so-called Blue Peacock nuclear landmines. However, the designers of the bomb foresaw a problem. The bomb’s sensitive components had to be kept at a certain temperature, far above the average of mid-Europe in winter. They also had to be kept at that temperature for potentially several days after an invasion and subsequent deployment of the nuclear mines.

At this point the boy-wonders floated a couple of options for warming the device. By far the most interesting proposal was to place a coop filled with chickens and seed inside the bomb before deploying it. The chickens could survive in such conditions for at least a week- plenty of time for enemy troops to approach after the nuke was deployed. And, critically, the chicken’s body heat would maintain the proper temperature, while the coop itself would (hopefully) keep them from pecking at the delicate equipment inside.

Perhaps realizing how absolutely ridiculous the chicken idea is (although not the only viable bird-brained bomb idea to come out of this era- see: WWII Files: Pigeon-Guided Missiles and Surprisingly Effective Bat Bombs), or, more likely, realizing the risks of nuclear fallout on neighboring, allied populations (and political fallout once West Germany realized what the British had done to their homeland, invaded or not), in February of 1958, the MoD Weapons Policy Committee scrapped the project.

However, two inert prototypes were retained, and one still exists today, although the public remained blissfully unaware of it until 2004, when Operation Blue Peacock was declassified and included in a National Archives exhibition. Given that the exhibit opened on April 1st and a critical suggested component of the nuclear mines was chickens, more than a few people thought that Blue Peacock was an elaborate joke – forcing the National Archives to put out an official statement that while “it does seem like an April Fool . . . it most certainly is not. The Civil Service does not do jokes.”