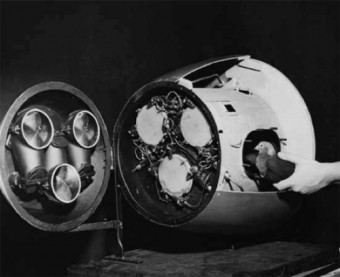 Today I found out about Project Pigeon and Project X-Ray, WWII plans to use pigeons to guide missiles and (literal) bat bombers.

The man behind Project Pigeon was famed American behaviorist and Harvard professor B.F. Skinner, who teamed with the U.S. Army to develop such a system.  Pigeons were trained using operant conditioning, a type of learning pioneered by Skinner in 1937 where behavior is modified by its consequences. In operant conditioning, the initial behavior is spontaneous, but when it is either rewarded or punished, that behavior is either reinforced or inhibited. In this case, Skinner rewarded pigeons for pecking an image on a screen to get them conditioned to do it.

Skinner then designed a nose cone for missiles that had three windows for the pigeon (or up to three pigeons in some tests) to look through. Via the flight control system and a metal piece on the nose of the pigeon(s) to detect a peck, the pecking of the windows would result in the missile changing course, depending on which window was pecked and where on the window the pecking happened.  The pigeons were then trained to peck such that the target, whatever object the pigeon was conditioned to go for, stayed centered in front of the missile.

The National Defense Research Committee was skeptical of pigeons guiding missiles, but contributed $25,000 (about $321,000 today) toward research into it anyway.  Even with this support, Skinner’s idea was considered eccentric and there were few in power who would take him seriously.

However, in simulation, the pigeons, who can process visual information roughly three times faster than humans, were remarkably good at guiding the missile straight to the target once they were trained, rarely missing in the simulator. Despite this, Project Pigeon was canceled in October of 1944 due to the belief of Army decision-makers that investing more time and money into it would delay the development of other projects that had more promise of being successful.  There was also, of course, some unease in entrusting the guidance of a missile to a bird.  As Skinner stated, the problem was not that the system didn’t work when tested in the simulator, it was that “no one would take us seriously.”

That wasn’t the end of Project Pigeon though. It was brought back by the Navy in 1948, only this time called Project Orcon, for “Organic Control.”  It was canceled again in 1953 thanks to advancements in electronic guidance systems. 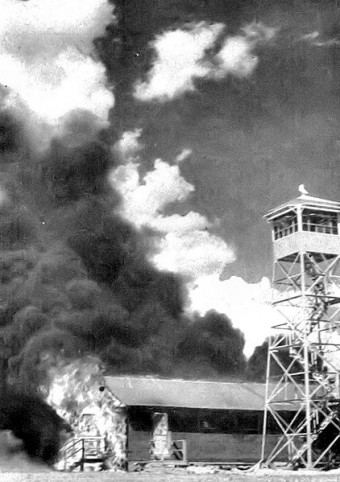 Bat Bombs were another experimental weapon considered by the U.S. during World War II, at the suggestion of a Dentist, Dr. Lytle Adams who was a friend of the First Lady. These bombs consisted of a bomb-shaped casing with several compartments inside. Each compartment housed a Mexican Free-tailed bat.  Each bat had a small incendiary device attached to it. The casings were refrigerated in order to lower the bat’s body temperature and force them into hibernation until they were dropped from a plane shortly before dawn. A parachute would slow the descent and eventually the casing would be triggered to open and release the bats.

As bats in sunlight would seek roosts in dark places like attics, when they were released and the Sun came out, they’d seek such places.  The hope was that with the incendiaries timed to go off all at once, this would start fires in places that were hard to access to fight a fire.  Further, in many cases, the fire’s existence wouldn’t be noticed until it had well established itself.

It was thought that bat bombs would be particularly effective in Japan where buildings were made largely of wood and paper.  Release several hundred thousand of these bats in major Japanese cities and the towns would go up in flames while resulting in much smaller losses of life than by carpet bombing or a (later) nuclear strike.  Essentially, it would help take out the infrastructure while minimizing civilian casualties.

While on the surface this plan may seem farfetched, the U.S. agreed to develop the Bat Bomb for four reasons: bats are available in large numbers (four caves in New Mexico alone are each believed to be the home to millions of bats); bats can carry more than their own weight in flight (up to three times their weight); bats can hibernate for extended periods without need of food or water; and finally, bats fly in the dark, then find secluded places to hide at sunrise.

The program was actually mildly successful in a bad way.  During testing, some of the bats with incendiary devices attached escaped, resulting in a large part of the base they were being tested at, Carlsbad Army Airfield Auxiliary Air Base, burning down. (As seen in the above picture.)

The results in the controlled testing were also very promising and it seemed like this would actually work well. In fact, it was estimated that while standard incendiary bombs would probably start about 167-400 fires per bomb load in a major Japanese city, based on the testing, the bat bombs would probably produce about 3,625-4,748 fires per load.  Further, just ten B-24 bombers could carry an astounding 1,040,000 bats strapped with the 17-28 gram incendiary devices.

However, the program was cancelled, as with the pigeons not because it didn’t work, but for other reasons.  In this case, it was estimated that the bats would not be ready for deployment until mid-1945. Despite the promising results in testing, the program was considered to be moving too slowly, and, with an estimated $2 million invested in it (about $25.7 million today), too expensively.  Instead, the Manhattan Project was deemed a more likely candidate for ending the war sooner, as it was thought to be progressing quicker and certainly would have a more dramatic effect if it was ultimately successful.

Both for the historical novelty of ending WWII with literal bat bombs and for avoiding having to use a nuclear weapon in war and the massive loss of life that ensued, I think we can all, except for maybe the bats, agree that it’s too bad the timetable on the bat bomb project was considered too long.  For reference, Little Boy and Fat Man were deployed on August sixth and ninth of 1945 respectively.  So at the original timetable, the bats would have been ready sooner had the project continued to be funded. 🙂