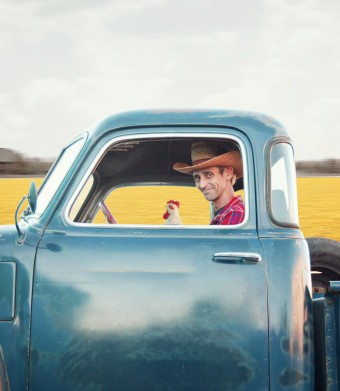 Ever wonder why if you want to buy a truck in the United States you have drastically fewer selections than many other countries tend to enjoy and why U.S.-made trucks dominate the market in the country, while the same ratios aren’t seen at all in cars?  It’s all because of chickens. No, really.

Before the twentieth century, chicken wasn’t nearly as common of an item on people’s dinner plates as today and was very much a luxury item mostly restricted to the wealthy in Europe. (In fact, chickens were actually originally domesticated for cock-fighting, not food.)

Improvements in food storage via refrigeration (see: Why Chicken Goes Bad So Quickly), refinements in chicken breeding, and the development of the so called “factory chicken” helped change chicken consumption in the United States and then the world.

So what does this have to do with the truck market in the United States? The U.S. began producing so much chicken that businesses started exporting it to Europe in massive quantities by the early 1960s, peaking at the United States owning half the chicken import market in Europe. European farmers simply could not keep up with the much lower prices of imported American poultry. For instance, in West Germany, only 1.1% of imported chicken came from the United States in 1956; six years later, despite the cost and effort of shipping the chickens all the way from America, American poultry made up nearly a quarter of all West German chicken imports and was sold for much less than the local varieties.

In response to the United States’ poultry rapidly taking over the market in many European countries, the European Economic Community (EEC) in 1962 instituted a tariff on imported chicken. Officially, the goal of the EEC was to help the European economy continue to recover from World War II. The tariff drastically raised the price of imported U.S. poultry and some countries even banned U.S. chicken all together.

The U.S. government spent eighteen months trying to negotiate a repeal of the tariff and bans, but without success. The then Chancellor of Germany, Konrad Adenauer, even later reported that, despite the Cold War threatening to get very hot, “about half” of his many conversations with Kennedy were about chickens. Senator J. William Fulbright of Arkansas even once interrupted a NATO meeting on nuclear armament to threaten to remove U.S. troops from NATO if the chicken sanctions weren’t removed. The whole thing, waged between allies in the Cold War, ultimately became dubbed “The Chicken War.”

After diplomacy failed, in retaliation, President Lyndon B. Johnson signed the so-called Chicken Tax into law on December 4, 1963. Not at all directly about chickens, it targeted potato starch, brandy, dextrin, and light trucks, and it forced companies importing those items to the United States to pay a whopping 25% tax on said imports.

Each of the four products taxed under the Chicken Tax were strategically targeted. For instance, the reason for choosing to include light trucks had to do with a specific manufacturer: Volkswagen. The Volkswagen vans were immensely popular in the United States during the early 1960s, and the U.S. government claimed the import cost of those from West Germany was about equal to the loss of revenue for the poultry industry at not being able to export chicken to West Germany. Practically overnight, the once popular VW van, which fell under the classification of “light truck,” disappeared from car dealerships around the United States as consumers weren’t willing to pay the increased prices directly resulting from the 25% tariff.

Of course, there were other industries Johnson could have picked to balance things out.  As to why specifically the light-truck industry was one selection, there was a political benefit to him at home. Recordings from his time in the White House later revealed an arrangement between Johnson and Walter Reuther, the president of the United Auto Workers. In exchange for Johnson targeting Volkswagen, Reuther agreed not to call a strike of auto workers ahead of the 1964 presidential election and to agree to support Johnson’s work in civil rights.

However, it should also be noted that the Chicken Tax was not so specifically worded to be levied just against Europeans manufactures, but against any automaker who imports light trucks into the United States. While most manufacturers chose simply not to sell their trucks in the U.S. anymore, or decided to build plants in the U.S. to produce at least some of their light truck lines, like Honda and Toyota, others discovered clever loopholes to import their trucks and cargo vans without paying the exorbitant tax.

For instance, certain Japanese companies started exporting pickup trucks without the bed or box attached to the U.S. rather than the fully assembled pickup truck. This ultimately made them only subject to a 4% tax, and the manufacturers simply attached the bed or box once the truck arrived in the U.S. However, this loophole was removed in 1980 at the request of U.S. automakers and unions, making these imports subject to the 25% tax.

Another loophole truck manufacturers still take advantage of is the difference between a passenger vehicle and a truck- one, of course, is designed to haul passengers and the other cargo, but the passenger vehicle is only subject to a 2.5% tax.

So, for instance, as recently as 2012, Ford (ironically enough an American company this tariff normally helps) built its Transit Connect vans in Turkey and outfitted them with seats, glass windows, and seatbelts in the back. They were then shipped to the U.S. and passed through customs as passenger vehicles. The vans then went to a warehouse where local contractors removed the seats and windows from the back, replacing them with a floor piece and steel respectively to transform the Transit Connect into a commercial van for hauling cargo. This loophole was also closed up when U.S. Customs ultimately forced the company to start paying the 25% tax on these vehicles as of March 2013. Ford lobbyists then began pushing for removing the tax for American-based companies, even on their imports, but keeping it for everyone else.

The Mercedes-Benz Sprinter van goes a different route before arriving in the United States. While passenger versions of the van are immune to the Chicken Tax, the cargo versions cannot normally be imported to the U.S. without the tax. So Mercedes-Benz ships the cargo version in a sort of kit form, only partially built, making sure to leave the kit incomplete enough so that when it’s assembled in the U.S., just enough parts are purchased and added in America to not have the authorities getting too upset about it. The process costs Mercedes-Benz quite a bit, resulting in an increase in the cost of the van of about 9%. Of course, 9% is better than 25%.

In the years since the chicken tax was made into law, the taxes on three of the four items have been repealed, but, as you might have guessed from those relatively recent examples, the tax on light trucks remains.  Proponents claim the tax helps protect American companies and keeps jobs in America. Opponents note that before the Chicken Tax, the “Big Three” American automakers featured numerous types of light trucks and cargo vans in their product lines, but since then the Chicken Tax has “insulated U.S. truck manufacturers from competition for five long decades. That’s kept prices high and created huge profit centers at Chrysler, Ford, and General Motors — so much so… that the Big Three have slacked off in developing innovative cars…” It has also been suggested that not only would U.S. consumers get a greater variety of trucks to pick from if the tariff was removed, but the prices would also likely fall with increased competition, bringing profit margins on trucks and cargo vans more in line with car sale profit margins for U.S. automakers, providing a net benefit to U.S. consumers.

Whatever side of the argument one’s on, it is, at the least, a fascinating piece of history that is still unfolding today.