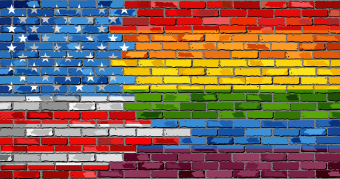 One doesn’t commonly associate the slogan “make love not war” with the U.S. military. Indeed, the United States military is feared and formidable precisely because it has proven so effective at conceptualizing clever and innovative ways to search, find and destroy, often with the simple push of a button.  However, in a departure from these hostile traditions, in 1994 the Wright Laboratory, part of the U.S. Air Force, produced a three page proposal for a “gay bomb”.

It proposed a bomb “that contained a chemical that would cause enemy soldiers to become gay, and to have their units break down because all their soldiers became irresistibly attractive to one another”. While the laboratory also came up with similarly questionable ideas, such as bad-breath bombs, flatulence bombs and bombs designed to attract swarms of stinging insects to enemy combatants, one has to admit that the gay bomb is certainly the most novel.

The Pentagon maintains that the love affair with the gay bomb idea was brief. However, the Sunshine Project thinks the Pentagon doth protest too much, finding that they “submitted the proposal to the highest scientific review body in the country for them to consider”. Indeed, the proposal’s information was submitted to the National Academy of Sciences in 2002.

The Pentagon certainly admits giving the project consideration, releasing a statement affirming: “The department of defence is committed to identifying, researching and developing non-lethal weapons that will support our men and women in uniform.”

Nonetheless, the project never made it off the ground. But the question remains: how did they even come up with such an idea? Perhaps the best clue lies in the political climate at the time. When newly elected President Bill Clinton attempted to lift the ban on homosexuals in the military, there was a din of saber rattling, pitchfork sharpening and moral hand-wringing from the military brass.

The general consensus among many leaders of the military was touted by the Department of Defence, “Homosexuality is incompatible with military service.” And that allowing gay people in the military would pose a security risk and disrupt the needed order for the military to be effective.The resulting Don’t Ask Don’t Tell  (later fully called Don’t Ask, Don’t Tell, Don’t Pursue, and Don’t Harass) compromise, which has since been struck down, was less than thrilling for the Pentagon at time.

In such a political climate, with rampant unfounded paranoia about gay people disrupting military discipline and morale, this project seems, notwithstanding its highly flawed premise, somewhat more understandable in terms of how they came up with the idea and why they believed it might be an effective weapon.

As to the science behind this military farce, while various companies, peddling scented sprays and rub-ons, find it expedient to claim that their product contains human pheromones which have an aphrodisiac effect, lab testing has lagged behind somewhat in actually confirming any of this. Admittedly, one section of the documents, entitled “New Discoveries Needed” acknowledges that, thus far, no such chemicals have been found to exist.

While the Gay Bomb project never became perhaps more than a pie in the sky dream of the Wright Lab, it has gained a second lease on life through news media, popular culture and even academia.

The news of this proposed weapon of mass de-lovin’ even spawned a musical, disappointingly entitled “Gay Bomb – The Musical”. Why they chose this title, as opposed to say “Brothers-in-Arms”, “Das Booty”, or “Saving Ryan’s Privates” is a mystery we may never solve…

For the attempt at making a gay bomb, the Wright Lab had the honor of winning the Ig Nobel Peace Prize in 2007. As the prize is organized by the Annals of Improbable Research, it seems to be an excellent home for the project, though perhaps a step down from the National Academy of Sciences.

Among other 2007 IG Nobel prize winners were Mayu Yamamoto (Chemistry), awarded for extracting vanilla flavour from cow dung, and Dan Meyer and Brian Witcombe, (Medicine) awarded for researching the side effects of swallowing swords. The levity of the event seemed lost on the gay bomb creators, however, who kept a straight face about the whole matter; they declined to attend the award ceremony to accept the prize personally. One hopes they were not insulted by this tongue-in-cheek gesture. After all, is all not fair in love and war?