The Three Stooges and Fake Shemps 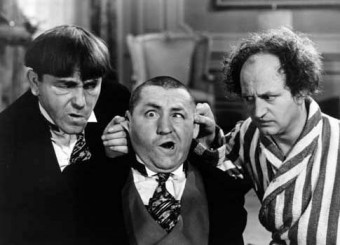 Whenever a director needs to finish a work without a particular actor, but needs to make it appear as if said actor is being filmed, they employ a “Fake Shemp.”  So who was the “Shemp” in question and how did the saying get its start in Hollywood?  It all began with the Three Stooges and a particular contractual obligation.

The Stooges began in vaudeville, working with another actor and comedian, Ted Healy. Moe and Shemp Howard (né Moses and Samuea Horwitz) were brothers, with the pair joining Healy’s troupe in 1921 and 1923, respectively. Larry Fine (né Louis Feinberg) and another actor, Fred Sanborn, rounded out the group in 1928. In 1930, Ted Healy and His Stooges made their first Hollywood film, Soup to Nuts.

But then Sanborn left. As they weren’t terribly successful (and he was tired of dealing with Healy, who the Stooges had frequent problems with), Shemp also left the troupe and he was replaced by another Howard brother, Jerome, who soon became known as Curly.

Signed to a contract with MGM in 1933, the Stooges’ early work included a series of shorts that often employed old footage from other films, and in particular, musicals; they also took roles as comic relief in feature films including Meet the Baron (1933) and Hollywood Party (1934).

After Hollywood Party, Healy left the group and together, “Moe, Larry and Curly” officially became The Three Stooges. Signing with Columbia again in 1934. Within a year, they were a hit, and over the next several years made such memorable flicks as Three Little Beers (1935), Disorder in the Court (1936), Violent is the Word for Curley (1938) and A Plumbing We Will Go (1940).

While the Stooges continued to make short films and appear in features through the 1940s, Curly (Jerome Howard) led an increasingly unhealthy lifestyle by carousing, overeating and constantly drinking. This all culminated in him suffering a stroke in 1945.

Despite this, Jerome continued to work, even as his fragile health worsened, and in May of 1946, he suffered a second, more serious stroke. Other than a couple of cameos, he never worked again. He suffered additional strokes and ultimately died on January 18, 1952.

To make up for Curly’s absence, Jerome’s brother Shemp returned to the group in 1947, in the interim having enjoyed a successful solo career. Over the next eight years, he, Moe and Larry made another 76 shorts, including Mummy’s Dummies (1948) and Gents in a Jam (1952), as well as the comedy feature Gold Raiders (1951).

However, disaster struck again when Shemp suffered a deadly heart attack on November 22, 1955. The problem was that the Three Stooges were now only two and still had four more shorts they needed to make in order to fulfill their contract with Columbia Pictures. 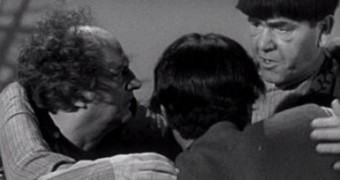 To meet their remaining obligations, Moe and Larry decided that, rather than find a replacement, they’d just mix in recycled footage. And when that wasn’t sufficient, actor Joe Palma was used as a stand-in for Shemp, generally filmed from the back if possible, and if not, his face would be obscured as best they could. In doing so, they managed to complete Rumpus in the Harem, Hot Stuff, Scheming Schemers and Commotion in the Ocean, all in 1956 and all on the surface seeming to star the deceased Shemp Howard.

As for how the expression got its start, filmmaker Sam Raimi is credited with coining the term “Fake Shemp” while filming The Evil Dead (1981). Given the movie’s ultra low-budget, its stars were not always available and the money simply wasn’t there to hire them to be to get every shot needed in the time they had to film the movie. So Raimi used some of his friends as well as himself and his brother to stand in for other actors in various scenes, particularly for special effects shots where the actors were covered in gore, anyway.

Continuing the practice in his later films including Darkman (1990) and Army of Darkness (1992), Raimi even included a variety of “Shemps” in the credits, including “Final Shemp” and “Shemp Wooley.” (The latter is in homage to Sheb Wooley, the individual who gave us the hit song Purple People Eater and the famous “Wilhelm Scream,” also known as the “Star Wars Scream.”)

Not alone, numerous other filmmakers have used Fake Shemps at one time or another, including to stand-in for Bela Lugosi, after he died while filming Plan 9 from Outer Space (1959), Gene Hackman for reshoots of Superman II (1980) (when Hackman refused to work with the replacement director) and Harrison Ford in Indiana Jones and the Temple of Doom (1984) (after Ford hurt his back).