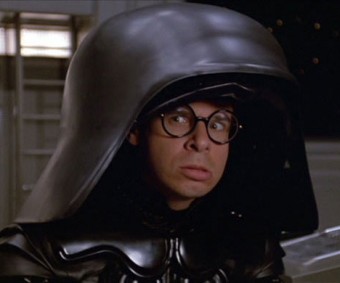 Janet Jackson and wardrobe malfunction.  Peanut butter and jelly.  Sonny and Cher.  Some things just go together.  Sort of how I feel about Canadian-American actor Rick Moranis and the movies Honey, I Shrunk the Kids or Ghostbusters. Whenever I hear his name, I have immediate flashbacks of oversized Cheerios and milk splashing out of a giant bowl.  But what happened to the guy with horn-rimmed glasses?  What is he doing now?

A comedy-genius, Moranis quietly vanished from acting in 1997, when he was last seen on screen in the movie titled ‘Big Bully.’  He had been slowly disappearing from the public eye after his wife’s death from breast cancer that had spread to her liver in 1991.

Why the disappearing act?  He chose to leave Hollywood to be a stay-at-home dad and raise his children.

A few months ago (July of 2013), he opened up about his unpopular choice to walk away from fame at the peak of his career during a rare interview on Bullseye with Jesse Thorn. (Definitely worth a full listen if you’re a fan of Moranis.)  The actor says he simply wanted to recreate the same wonderful childhood for his kids that he experienced.

In his own words:

Well, stuff happens to people everyday and they make adjustments in their lives for all kinds of reasons, and there was nothing unusual about what happened or what I did. I think the reason people were intrigued about the decisions I was making, and sometimes seem to have almost admiration for it, had less to do with the fact that I was doing what I was doing and more to do with what they thought I was walking away from- as if what I was walking away from had far greater value than anything else might.

The decision in my case to become a stay at home dad, which people do all the time, I guess wouldn’t have meant much to people if I had had a very simple kind of “make-a-living” existence and decided, “You know what? I need to spend more time at home. I’m not going to do that. I’m going to do this part time and then work out of my house to do this and this and this.”

But because I came from celebrity and fame and what was a peak of a career, that was intriguing to people and to me it wasn’t that. It wasn’t anything to do with that. It was just work and it was time to make an adjustment…

I was trying to recreate a lot of the joy I experienced as a kid… [I] kind of decided to follow the adage of “90% of the success is showing up or being there” and I found that to be true.  Just being there was the best thing I could do.  That’s what I experienced with my mother at home all the time and so when my kids came home there was music and there were lights on there were great smells coming out of the kitchen and it was just always a joyous place to be and that’s what I wanted, what I wanted to create.

I didn’t walk away from [my creativity], I applied all my creativity to my home life, to me kids, to my family.  I was the same person, I didn’t change, I just shifted my focus.

So does he miss acting?

Will Moranis make a return to the limelight? After all, his kids are grown now.

I’m not interested in doing anything I’ve done in the past.  In terms of being on camera, I have no idea. It’s not something I’ve given any thought to at all…

I have never had a plan, I’ve never had any forethought of anything I’ve ever done.  I just kind of looked at opportunities, said no to most things and sometimes whatever was left standing was the thing that I went for and sometimes something came along that was so appealing I just jumped at it…

In the end, Moranis summed up his disappearance from acting quite well: