The Famous “HOLLYWOOD” Sign Originally Read “HOLLYWOODLAND” and Was Lit By About 4,000 Light Bulbs Embedded in the Letters 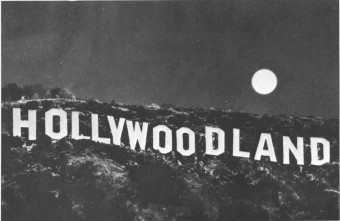 Today I found out the Hollywood sign originally read “HOLLYWOODLAND” and was lit with about 4,000, 20 watt light bulbs, which would flash “HOLLY” then “WOOD” then “LAND” then “HOLLYWOODLAND” repeatedly.

The sign was originally put up in 1923 to promote a housing development.  The owner of Crescent Sign Company, Thomas Fisk Goff, designed the sign itself, making the letters about 50 ft. tall by 30 ft. wide and embedding about 4,000, 20 watt light bulbs in the sign to light it up and flash as described above.  The sign cost about $21,000 to make and put up (about $265,000 today) and was expected to last about a year to two years.

The “LAND” portion of the sign was taken off in the late 1940s when the Hollywood Chamber of Commerce in conjunction with the L.A. Parks Department began efforts to repair the seriously deteriorated sign which had been abandoned by the Hollywoodland real estate group in the 1930s due to the Great Depression.

With the “LAND” part gone, it would now be a symbol for all of Hollywood, rather than a housing development.  The lights were removed in the renovation as the Parks Department didn’t want to pay for the electricity or replacement bulbs, so stipulated that the Chamber of Commerce would have to pay if they wanted to keep them.  They opted not to.

By the 1970s the sign had further deteriorated to the point where it read “HULLYWO D”.  At that point, spurred on by a campaign by Hugh Hefner, Alice Cooper, and Gene Autry, nine total donors, each contributing $27,700, paid to replace each of the original letters with more permanent 45 ft. tall steel letters.  These donors were:

The new sign was unveiled on November 14, 1978 and has stood to this day, though the letters were repainted in 2005.