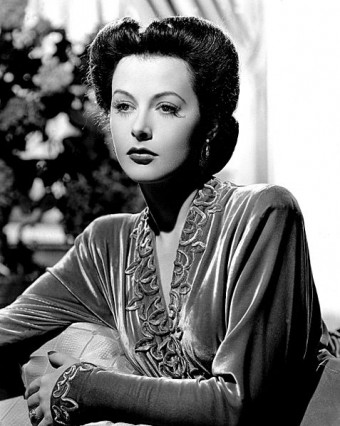 Did an exotic actress from Vienna, considered one of the most beautiful women in Hollywood in the 1940s, really invent wireless? Not exactly, but the non-sensationalized facts of the matter are no less fascinating, involving Hollywood, the World War II Axis Powers, and remote control technology.

Hedwig Eva Maria Kiesler, better known as “Hedy Lamarr”, once really did patent a “Secret Communication System” for radio communication, meant to foil the Axis during WWII. It was specifically designed to be used as a remote control system to securely guide torpedoes while getting around the problem of jamming.  Her idea at its core was really part of the larger concept of “frequency-hopping”, with her device developed with composer George Antheil.

Long forgotten until relatively recently, when it was re-discovered by researchers in 1997, the methods used in her invention were far ahead of their time, with the principles behind it paving the way for wide spectrum communication technology we enjoy today in Bluetooth and other wireless technologies. (Incidentally, Bluetooth is named after a 10th century Scandinavian king.)

During WWII, the National Inventors’ Council was formed to recruit Americans to pitch in with ideas to foil the Axis Powers. Technological inventions aimed at breaking encoded communications and encryption were especially sought.

Lamarr submitted an idea for a radio-controlled torpedo. As mentioned, Hedy’s idea, in collaboration with the Avant garde musician George Antheil who had previously experimented with automated control of musical instruments, used “frequency hopping”, wherein transmitter and receiver communicated via a channel that constantly changed frequencies, making it difficult to detect and jam.

The idea of the torpedo communication system was to utilize a piano roll like punch tape to create signals within 88 different frequencies (emulating the keys of a piano) of the radio spectrum, in a sequence shared only by the torpedo’s receiver and the transmitter on the ship.

The two records may be synchronized by driving them with accurately calibrated constant speed spring motors, such as are employed for driving clocks and chronometers. However, it is also within the scope of our invention to periodically correct the position of the record at the receiving station by transmitting synchronous impulses from the transmitting station…

By thus rapidly hopping from one frequency to the next, the enemy monitoring the radio waves had no hope to intercept and jam the signal, allowing the torpedo to continue to be controlled throughout its journey towards an enemy ship.  Previous to this, a problem existed in that the guidance signal could be detected and jammed, allowing the enemy ship to simply move out of the way of the previously remotely controlled torpedo.

Lamarr and George presented this technology to the National Inventors Council in 1940.  But wouldn’t you know it, the military brass, no doubt perhaps not listening too closely to what some “pretty face” actress had to say, chose to ignore the brilliant idea from the beautiful actress and the avant-garde experimental composer, even though it would have proved extremely useful and quite practical, using existing technologies of the day, rather than needing expensive new technologies to be developed to make it work.

Her design for a “Secret Communication System” using frequency hopping was patented, filed, and forgotten for a time, though later the U.S. military would use this same idea during the Cuban missile crisis. And of course, today this same idea is used all over the place in various wireless technologies.

Eventually, Lamarr’s contribution in this field was recognized and she was given the credit she deserved when in 1997, the Electronic Frontier Foundation awarded her with a “Pioneer Award”, and she also received the prestigious Bronze BULBIE Gnass Lifetime Achievement Award, given “to outstanding individuals whose lifetime achievements in the arts, sciences, business, or invention fields significantly contributed to society…” She was the first women to win that latter “Academy Award of inventors”.

One year later, in 1998, Wi-LAN Inc. purchased a 49% stake in Lamarr’s patent in exchange for some undisclosed amount of company stock, which despite my sincerest efforts I was unable to find how much she got from the swap.

So where did this actress get the idea and munitions expertise to create such a thing? Hedy Lamarr was born 1913 in Vienna. Her movie debut, at the age of 18, was Gustav Machaty’s Extase (Ecstacy), a 1931 film which is notorious even today for its nudity and a very convincing female orgasm scene.

Shortly after making that film, she attempted to free herself of a domineering husband, Friedrich Mandl, who was a wealthy Austrian munitions dealer she had married at the age of 19. Like a fabled princess, she was all but captive in her castle home in Austria, Schloss Schwarzenau.

Hedy’s husband presided over numerous meetings with leaders of the military industry and, despite both he and his wife having Jewish ancestry, hobnobbed at dinner parties with the likes of Hitler and Mussolini.

Partially as he liked to keep an eye on her, she often accompanied her husband to many conferences and business meetings with various engineers and scientists who specialized in weaponry. It is during this period that Hedy is thought to have augmented her skill with mathematics with valuable information about weapons systems, particularly being privy to technologies her husband’s company and others were trying to develop to use to detect and jam communications systems used by enemy military powers.

To escape her oppressive and ultra-controlling husband, along with her virtual prison in his castle, according to her autobiography, Ecstacy and Me, in 1937, she drugged a maid that looked something like her, then disguised herself as the maid, and managed to leave the castle and flee the country under her stolen identity.

Her Hollywood career was launched before she even arrived in the United States, when she met MGM mogul Louis B. Mayer in Europe. At that time, he convinced her to change her name to Hedy Lamarr (with the “Lamarr” in homage to famed silent film star Barbara La Marr) in order to distance herself from the Ecstasy stigma that had followed her since the film.  She soon had a distinguished career playing alongside a who’s who of great actors such as Clark Gable and Spencer Tracy.

As noted, in the end, Hedy’s unrealized contribution to World War II and wireless technology lay dormant for many years. She didn’t invent wireless itself, as you’ll often read, but she did patent an idea with huge potential. The technology in her “Secret Communication System” patent was broad enough to have wide application and its brilliant use of frequency hopping at its core is essential to many wireless technologies we have today; so technically the industry couldn’t proceed without applying this idea of hers in certain technologies, which first occurred in the public sector in the late 1950s when Code Division Multiple Access (CDMA) was being developed and her her invention was re-discovered during a patent search.