A Historic Defecation: The Curious Case of the Lloyds Bank Turd 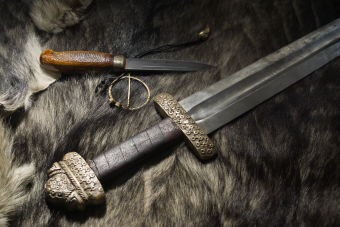 It may sound gross, but it’s real and it’s considered a national “treasure.” And although we might wish we did, we didn’t make up the name—that’s really what it’s called. Get ready to learn about bathroom archaeology.

If you’ve ever been to the English city of York, you already know that it’s one of the most beautiful cities in the United Kingdom. Situated at the junction of the Ouse and Foss rivers, this onetime capital of the kingdom of Northumbria is home to picturesque cobblestone streets, elegant Tudor architecture, and York Minster Cathedral, one of the finest churches in England. York was one of the nation’s largest cities until the Industrial Revolution, when it was eclipsed by manufacturing centers like Sheffield and Birmingham. That may not have been good for the local economy, but it did preserve the city’s charm.

Alas, York wasn’t always the sparkling jewel that it is today. In the Middle Ages it was positively filthy, something King Edward III observed when he visited in the 14th century. He ordered that the streets be cleaned at once, noting that the “abominable smell abounding in the city…from dung and manure and filth and dirt,” was worse “than any other city in the realm.”

Edward’s observation wasn’t unfounded. There have been settlements at York for more than 2,000 years, and one result of the continuous occupation of the site is that the modern city sits on a layer of densely compacted rubbish and filth that archaeologists estimate is about 10 feet deep.

Portions of this mass are remarkably well preserved, thanks to the fact that the soil in some parts of the city is waterlogged and largely oxygen free, preserving for more than 1,000 years things like wood, leather, cloth, and bone, most of which normally would have biodegraded completely in just a decade or two. Modern archaeologists got their first inkling of how much lay beneath York in 1972, when the foundation for a Lloyds Bank branch was dug on Pavement Street and artifacts from the city’s Viking period were discovered in the muck. (Viking raiders captured York—then known as Jorvik—in 866 A.D. and held it for nearly a century before they were finally driven off in 954.)

An even bigger discovery of Viking artifacts was made down the road in 1976, when an old candy factory on Coppergate Street was torn down to make way for a shopping center. There excavators discovered the remains of a cluster of Viking buildings, complete with animal enclosures, wells, refuse pits, and latrines. Working from 1976 until 1981, archaeologists sifted through 36,000 individual layers of debris—more than eight tons of material in all—to recover more than 40,000 objects, including glass beads, knives, combs, shoes, bowls, keys, locks, dice, fish hooks, even a leather ice skate with a blade carved from bone. Many of these items had been discarded by the Vikings in their rubbish pits.

The artifacts recovered from the Coppergate site were impressive enough that a Viking museum was added to the shopping center so that the artifacts could be displayed right where they’d been found, in a reproduction of the Viking village unearthed at the site. The Jorvik Viking Center opened in April 1984; since then, more than 20 million people from all over the world have passed though its doors.

But many visitors come not to see the treasures unearthed at Coppergate Street—not the Viking coins, shoes, or jewelry, or the dice, the knives, or even the leather-and-bone ice skate. They come to see a much more humble and earthy “treasure” recovered from a lowly Viking latrine at the Lloyds Bank site on Pavement Street. The crowds come to see the 1,200-year-old Lloyds Bank Coprolite—or Lloyds Bank Turd, as it is affectionately known—one of the oldest, largest, most intact fossilized pieces of human excrement ever found on Earth.

It’s the only artifact that visitors ask for by name.

A DIFFERENT KIND OF BANK DEPOSIT

The Lloyds Bank Turd isn’t valued just by naughty schoolchildren, either: Serious scientists assign great weight to the discovery, because finding a single, intact human turd from a thousand years ago is so unlikely.

Finding large deposits of biodegraded human waste at a settled site like Jorvik isn’t unusual; indeed, it’s estimated that a third of the entire 10-foot-deep mass of debris beneath York is made up of human and animal waste. Scientists can distinguish between the human poop and the animal poop, which makes it possible to look for clues about the diet and health of the populations that created it.

But such waste is usually found only in large masses, such as at the bottom of latrine pits, and archaeologists can draw only general conclusions about the people that used the latrines, since it’s nearly impossible to distinguish one pooper’s poop from another’s. The value of a single, fossilized poop like the Lloyd’s Bank Turd is that it provides a snapshot of a single person at a single point in time.

GETTING TO KNOW YOU

So what do we know about the anonymous Viking who made the most famous deposit that Lloyds Bank is ever likely to see? His or her diet consisted largely of meat and grains, but not much in the way of fruits or vegetables, which may help explain why the sample is nine inches long and weighs half a pound. “Whoever passed it probably hadn’t ‘performed’ for a few days,” says student conservator Gill Snape. Considering the large number of fruit pits and vegetable seeds found at the site but not in this particular Viking’s stool, this was likely not the healthiest or the most regular person in the village.

Like a lot of Vikings, this one suffered from at least two types of intestinal parasites: The remains of hundreds of whipworm and maw-worm eggs were found in the stool. The presence of worms in the stool is indicative of the filthy conditions and poor hygiene in Viking settlements. Wells were dug too close to latrines, making the availability of clean, uncontaminated water a hit-or-miss (usually miss) proposition. The dirt floors of the Viking dwellings teemed with fly larvae (maggots) and mouse and rat droppings, with plenty of dog, pig, cow, and horse droppings just outside the door. It was virtually inevitable that residents of such settlements would be infested with intestinal parasites.

If you get a chance to visit York, be sure to go to the Jorvik Viking Center and view the Lloyds Bank Turd in all its glory. Take the entire tour. The Viking village was painstakingly created using the most up-to-date information available when it was built in the early 1980s. And in 2001, when the exhibit underwent a $7.5 million facelift, 25 years of studying the artifacts was used to make the exhibit even more historically accurate. How accurate? The Lloyds Bank Turd was chemically analyzed to create a “fecal odorgram”—a best-guess estimate of what it smelled like when it was first created 1,000 years ago, and that smell has been artificially reproduced to give the latrine display a level of olfactory authenticity unheard of—and unsmelt of—in other museums.

About the only thing that isn’t accurate about the latrine display is that the Viking figure depicted in mid-squat is partially hidden behind a screen. That’s to protect the visitors’ modesty, not the Viking’s. According to the best available evidence, a real Viking latrine wouldn’t have had such a screen. Vikings of that period had little or no squeamishness regarding bathroom functions. They were perfectly comfortable pooping out in the open, even when there were other people around.

So how much is a treasure like the Lloyds Bank Turd worth? More than 20 years ago, Dr. Andrew Jones, the director of the Jorvik Viking Center and a leading “paleo-scatologist” (a scientist who studies ancient fecal matter), had the turd appraised for insurance purposes. The verdict: It was valued at $39,000, an amount that Jones said was way too little. “It’s insulting, really,” he told The Wall Street Journal in 1991. “This is the most exciting piece of excrement I’ve ever seen. In its own way it’s as irreplaceable as the Crown jewels.”
Irreplaceable, but not irreparable, as the world learned in 2003 when a teacher on a class trip to the Viking Center dropped the poop and it broke into three pieces. So did the center cash in its insurance policy? Nope—they just had student curator Gill Snape glue the poop back together and put it back out on display.

“I heard I may be doing some unusual things while I was here,” Snape says, “but I never imagined it would include this.”