Myth: Shocking someone who has flat-lined can get their heart started again. 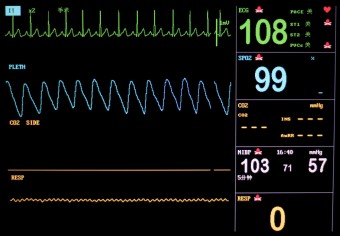 It never fails. You’re watching television and someone is circling the drain, in the toilet that is their life. The noise from the heart monitor affirms they’re still alive, with its consistent, rhythmic beeps. All of the sudden, alarms start going off. On the monitor- the dreaded “flat-line”.

Doctors begin rushing in. One of them always seems to yell, “Hand me the paddles; we’re losing him!” The machine is charged, and miraculously the heart is shocked back to life, saving the day! (But only after a suitably dramatic number of zaps and someone inevitably shouting “LIVE DAMN YOU!”)

The problem is that, in real life, you’ll be accomplishing nothing by shocking a “flat-line”. Unless you like your meat well done that is.

Medically, a “flat-line” is known as asystole, meaning no (heart) contraction. It might seem common sense that if there is no contraction you might want to contract it with a shock. The truth about why this will never “restart” the heart lies in how the heart creates its life giving beat. In the end, it all comes down to electrolytes.

The heart typically receives approximately 60-100 “shocks” per minute, usually from specialized pacemaker cells in the right upper portion of the heart, known as the Sinoartrial node (SA node). These specialized cells will naturally create an electrical differential between the inside of the cell and the outside. Once that differential is at just the right amount, it will send a “shock” down, and throughout, the heart muscle causing it to contract. Once this electrical signal is produced, it will generally go completely throughout the heart through the cardiac conduction system.

You might be thinking right now, if the heart creates a shock to get a contraction, why won’t shocking it externally get the job done? Well, the devil is in the details.

The SA node creates an electrical differential using electrolytes like potassium, sodium and calcium. I won’t be going into a college level physiology lecture, as this article would be way too long and I imagine most of you aren’t interested in reading such an essay. However, for the purposes of understanding why shocking asystole doesn’t work, I will very briefly summarize what’s going on “under the hood” here.

These electrolytes all have specific electrical charges that pass through your cell walls using channels named after the electrolyte- sodium channels, calcium channels etc. Potassium generally lies inside of your cell before it contracts; sodium and calcium generally reside outside the cell. When you have a blood pressure (if you didn’t you would quickly be dead), sodium is naturally forced inside your cell. This also causes potassium to be forced out of your cell creating an electrical potential. Once that potential gets high enough, it opens up calcium channels which are voltage regulated. When the calcium channels are opened up, sodium and calcium rush inside the cell creating just the right amount of charge. Once that charge is reached, the heart sends out its shock, known as depolarization.

So where does that impulse go once the SA node creates it?

When the SA node sends out its life sustaining impulse, it immediately shocks the atria. The pulse then gets “held up” in another set of cells called the Atrioventricular node, or AV node for short. This allows for the bottom part of the heart to receive the blood from the top part. The AV node then transmits the impulse down to the bundle of His (no, not the bundle of hers, sorry ladies) and then to two pathways called the right and left bundle branches. It then gets transmitted to the rest of the Ventricles through what are called Purkinje fibers. All together this “shock” causes the atria to contract, then the ventricles. The wonder of a pulse!!

This electrical conduction is what doctors are looking at when they are staring at the heart monitor. Generally speaking, this impulse creates a squeeze that actually creates your pulse. There are times however, that this isn’t the case. A person could have a normal looking electrical conduction on the monitor and still have no pulse. The phenomenon is known as Pulse-less Electrical Activity (PEA). This is one of the reasons why doctors still need to check pulses, and blood pressures, even if the person is hooked up to a heart monitor.

When someone is in cardiac arrest and has no pulse, depending on how the electrical conduction system is working, they might need to be shocked. There are numerous electrical rhythms that can present themselves in cardiac arrest. I will touch on the most common, and why shocking works.

The most common heart rhythm just after someone goes into cardiac arrest is known as Ventricular fibrillation. When the SA node fails to create a beat, countless other cells within the heart attempt to create the beat instead. The result is numerous areas of the heart that “shock” it all at the same time, from different directions. Instead of a steady contracting beat, what you get is a heart that looks like it’s having a seizure.

The effect is a heart that doesn’t pump blood through it. The only way to get all of these different areas of the heart (foci) to work in unison again is to shock it with more electricity than the cells themselves are creating.

When you shock these cells with this large amount of electricity, it forces all of the electrolytes out of the cells at the same time. The hope, and it’s really just a hope, is that the heart’s normal operation of electrolytes passing across the cell membranes in an organized fashion will take over again.

Here is the devil in the shocking details.

When someone is in asystole (flat-lined), there is no electrical differential that the monitor can pick up. Essentially, there are no specific electrolytes inside the cell, compared to outside the cell, with different electrical potentials to create an impulse. If you attempted to shock this, you wouldn’t be doing anything. There are no electrolytes to force out of the cells that are any different than the ones that are already outside the cells. All you would get is more flat-line.

In fact, after every shock ever given to someone in cardiac arrest, the rhythm created for a few seconds is asystole, with the heart rhythm temporarily stopped. It takes a few seconds for the normal pathways to get going again. If you had asystole before you shocked it, all you would do is burn the heart with the heat created from the shock. As every steak lover knows, don’t burn the meat! Medium-well please… unless you’re in Texas, then from my experience it’s “rare” only and ordering anything different will see the chef come out from the kitchen and slap you in the face. (Note: The red juice in such rare red meat is not actually blood)

In the end, it’s a Hollywood myth that you would treat asystole (flat-line) with a shock. You must first have some sort of electrical impulse to work with. Science 1, Hollywood 0.