Why a Final Performance is Called a “Swan Song” 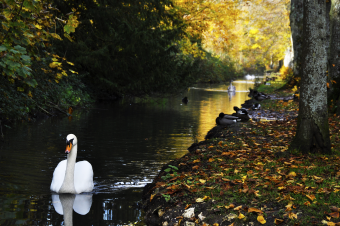 When someone performs for the last time, we often refer to it as a “swan song” which seems odd given that swans aren’t particularly known for their stage presence… So where exactly did this phrase come from?

This expression is generally thought to have its genesis in the over two thousand year old idea that swans sing a beautiful song just before death. Although this is technically not accurate, there is a hint of truth to it in select instances. For instance, the Whooper Swan, which as its name suggests is known for making a bizarre honking sound, has been observed to sometimes make a noise as it expires. This is thought to be a byproduct of this bird having an extremely elongated tracheal loop combined with the way the air flows through it as they die and their lungs expel any excess atmosphere. The sound this sometimes makes has been described as being akin to “a clarionet when blown by a novice in music”… Not exactly beautiful song, but it is a sound upon death at least. Interestingly, the Whooper Swan is endemic to Greece, leading some to speculate that someone in Ancient Greece heard one of these birds’ dying sounds and subsequently exaggerated the event and attributed the same to all swans, thus giving rise to the legend.

Perhaps the first known instance of the idea of swans singing just before death appeared in the six century BC in one of Aesop’s Fables- The Swan and the Goose:

A certain rich man bought in the market a Goose and a Swan. He fed the one for his table and kept the other for the sake of its song. When the time came for killing the Goose, the cook went to get him at night, when it was dark, and he was not able to distinguish one bird from the other. By mistake he caught the Swan instead of the Goose. The Swan, threatened with death, burst forth into song and thus made himself known by his voice, and preserved his life by his melody.

Another potential candidate for the first reference to this can be found in Aeschylus’ Agamemnon, written in 458 BC: “That is why he lies there like this, and she does too, his lover, after singing her last death-laden lament like a swan.”

Despite the dates I just listed, which of these is really first isn’t clear because none of Aesop’s Fables were actually written by him as all copies of “his” fable compilation have been lost. Since then, many fables have been falsely credited to him, but really were simply tacked on in the ensuing millennia and others were re-worked to fit the precise message the teller was going for. (Even much of what we “know” about this legendary storytelling slave himself is probably itself fiction.)

The first known compilation of Aesop’s Fables wasn’t even created until 300 BC by Demetrius of Phalerum who, among many other things, was the head of acquisitions at the Library of Alexandria. (And if you’re curious, see: What Really Happened to the Library of Alexandria?) This work has also since been lost.  The first surviving collections of the fables didn’t come about until the first and second centuries AD.  Needless to say, with a 600+ year gap between when Aesop supposedly lived and the first surviving collection of “his” fables, it’s difficult to say when the story of the Swan and the Goose was first written down, let alone when it was first spoken.

Whatever the case, from here the notion of swans singing just before death appeared in countless pieces of classical literature, poetry and music.  For instance, in Plato’s Phaedo, Plato claims that Socrates stated,

Will you not allow that I have as much of the spirit of prophecy in me as the swans?  For they, when they perceive that they must die, having sung all their life long, do then sing more than ever, rejoicing in the thought that they are about to go away to the god whose ministers they are.  But men, because they are themselves afraid of death, slanderously affirm of the swans that they sing a lament at the last, not considering that no bird sings when cold, or hungry, or in pain, not even the nightingale, nor the swallow, nor yet the hoopoe; which are said indeed to tune a lay of sorrow, although I do not believe this to be true of them any more than of the swans.  But because they are sacred to Apollo, and have the gift of prophecy, and anticipate the good things of another world, therefore they sing and rejoice in that day more than ever they did before.  And I too, believing myself to be the consecrated servant of the same God, and the fellow servant of the swans, and thinking that I have received from my master gifts of prophecy which are not inferior to theirs, would not go out of life less merrily than the swans.

Numerous historical figures have since made attempts to debunk the idea that swans sing upon their death, such as Pliny the Elder who wrote in the first century AD, “Observation shows that the story that the dying swan sings is false, judging from experience…” in his landmark Natural History.

Nevertheless, the notion endured.  Notable instances of this include Chaucer writing in his fourteenth century Parliament of Foules, “The Ialous swan, ayens his deth that singeth. [The jealous swan, sings before his death]” (Interestingly, this poem also includes the first explicit Valentine’s Day / love connection.)

Even Leonardo da Vinci got into the swan song / death action noting, “The swan is white without spot, and it sings sweetly as it dies, that song ending its life.”

Shakespeare also wrote in his sixteenth century The Merchant of Venice: “Let music sound while he doth make his choice; then, if he lose, he makes a swan-like end, fading in music.”

So when did this idea of swans singing before death morph into the specific expression “swan song”? The English version of this appears to have been borrowed from the German Schwanengesang (Swan Song), with the first known instance of the original German version being Georg Philipp Telemann’s 1733 concerto of the same name.

The first recorded use of the phrase in English didn’t appear in print until a couple decades later when Scottish priest John Willison in one of his Scripture Songs (Song VI) noted, “Being a Prophecy of Christ, and King David’s Swan Song in views of death…”

In Sermon II of his 1747 Five Sacramental Sermons, published in The Balm of Gilead, Willison also mirrors the sentiment in Plato’s Phaedo, referring to a swan song upon death being one of joy,

You may sing that swan-song, Psal. xlviii. 14, “For this God is our God for ever and ever, and he will be our guide even unto death.” It is this that gives a believer peace in his latter end: it made David to triumph in the view of approaching death…

As for how this popularly morphed into referring to a performer’s final work or performance, beyond a few other references very loosely fitting the bill, the first known more explicit instance of this was the great Franz Schubert’s 1828 Schwanengesang (Swan Song), which is a collection of songs by Schubert written near the end of his life and published in 1829, a year after his death at the tender age of 31. (Not to be confused with Johann Senn’s Schwanengesang poem that Schubert previously put to music in 1822.)

Schubert did not, however, name this posthumous work. Instead, Tobias Haslinger published the collection under this name referencing the age-old notion of swans singing a final, beautiful song before expiring, with, of course, Schubert being the swan in this case and the collection his final “song”.