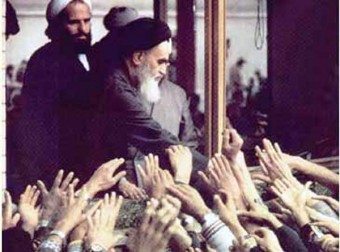 There were many groups that wanted the Shah Mohammed Reza Pahlavi gone from Iran in 1978, and they were rallying around Ruhollah Khomeini to replace him as head of the government. Born in 1902, Khomeini was a scholar and cleric who earned the title of Ayatollah after rigorous religious study.

In addition to his religious practice, Khomeini was also very active politically. He spoke out against the Shah both in his writings and while preaching, railing against his glorification of “western decadence” at the expense of Islam. This led to Khomeini being exiled in 1964, but he still managed to send messages to his followers from Turkey, Iraq and then France.

Khomeini was shrewd enough to downplay any personal glory he stood to gain if the Shah was overthrown. He stressed the “We’re all in this together” angle and concentrated on uniting the different factions with the sole purpose of booting the Shah. Khomeini became the public face of the revolution – a religious figure leading a partially secular movement.

The six to nine million strong (roughly 10% of the country’s population at the time) demonstrations from December 2-11 of 1978 were the Iranian people’s official call for Khomeini to lead that revolution. At that point, every political force in the country was turning against the Shah. All he had left in his corner was the military. The Ayatollah was convinced they’d turn on him as well.

Khomeini told his followers to march in the streets in defiance of the imposed curfew and offer themselves as martyrs for the revolution, if need be. On December 11, 1978, several million people marched through Tehran proclaiming Ayatollah Khomeini as their leader, while demanding social justice and the abolition of the monarchy.

Sattareh Farman Farmaian gives her first-hand perspective of Tehran during the revolution in her 1992 book Daughter of Persia:

The sound of gunfire had become commonplace everywhere as the army fired into the churning crowds. But whenever the tanks and infantry approached them, the demonstrators threw carnations at the troops. “Brothers in the army,” they chanted, “why are you killing your brothers?” Hearing these spine-chilling words, issuing from a million throats that spoke as one, was like hearing the ocean speak. Ayatollah Khomeini had been right: weeping young village draftees of eighteen or nineteen, sickened at killing other Iranians, would tear off their military insignia, stumble into the crowds, and give their guns to the demonstrators even as their comrades kept on shooting them.

The Shah left Iran forever in January of 1979. The controversial Ayatollah Khomeini came to power in February, and Iran became a republic, though perhaps not in the form many expected given many of Khomeini’s previous promises. Before the revolution, many of Khomeini’s political ideas were very liberal, helping him gain the support of various non-religious activists and intellectuals.  After the revolution, he turned on them:

Also before the revolution, Khomeini stated, “We would like to act according to the Universal Declaration of Human Rights. We would like to be free. We would like independence.” After, he was lamented by many in the world for various human rights violations against those who opposed the new Iranian theocracy, making such statements as, “I repeat for the last time: abstain from holding meetings, from blathering, from publishing protests. Otherwise I will break your teeth.”

His promises that “no one should remain homeless in this country,” and that all Iranians would get free transportation, oil, heating, electricity, and telephone service also were ignored once he came to power. Rather than end poverty in the country, it rose by 45% in the first six years after Khomeini came to power.

Before the revolution, he also promised that the clergy would not interfere with the will of the people and that he would simply function as an adviser if the revolution was successful.  After, he became Supreme Leader and noted of the provisional government, “I shall kick their teeth in. I appoint the government.” After he appointed his own prime minister of the country, he also stated, “since I have appointed him, he must be obeyed,” and those who didn’t would be in “revolt against God.”

Needless to say, Khomeini was, and remains, one of the more controversial figures of the 20th century, loved by some, deplored by others, particularly in the West for his call for the execution of British Indian writer Sir Salman Rushdie, his endorsement of the Iran hostage crisis (partially spurred on by the U.S. allowing the Shah into the country for medical treatment and then denying requests to forcibly return him to Iran for trial), and for Khomeini’s labeling of the United States as the “Great Satan” (partially in response to the United States’ interference in Iranian politics during the Cold War and previous support in keeping the Shah in power starting in the 1950s, hoping to keep communism out of Iran and ensure Western oil interests in the country).