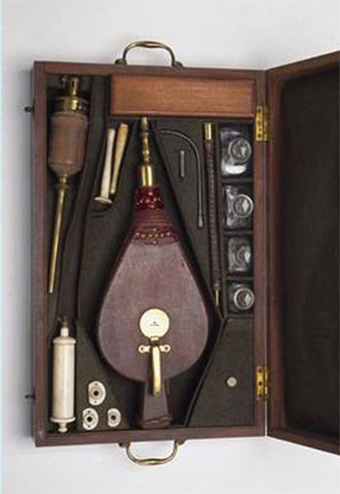 When someone is “blowing smoke up your arse” today, it is a figure of speech that means that one person is complimenting another, insincerely most of the time, in order to inflate the ego of the individual being flattered.

Back in the late 1700s, however, doctors literally blew smoke up people’s rectums. Believe it or not, it was a general mainstream medical procedure used to, among many other things, resuscitate people who were otherwise presumed dead. In fact, it was such a commonly used resuscitation method for drowning victims particularly, that the equipment used in this procedure was hung alongside certain major waterways, such as along the River Thames (equipment courtesy of the Royal Humane Society). People frequenting waterways were expected to know the location of this equipment similar to modern times concerning the location of defibrillators.

Smoke was blown up the rectum by inserting a tube. This tube was connected to a fumigator and a bellows which when compressed forced smoke into the rectum. Sometimes a more direct route to the lungs was taken by forcing the smoke into the nose and mouth, but most physicians felt the rectal method was more effective. The nicotine in the tobacco was thought to stimulate the heart to beat stronger and faster, thus encouraging respiration. The smoke was also thought to warm the victim and dry out the person’s insides, removing excessive moisture.

So how did this all get started? The Native Americans were known to have used tobacco in a variety of ways, including treating various medical ailments, and the European doctors soon picked up on this and began advocating it for treatments for everything from headaches to cancer. 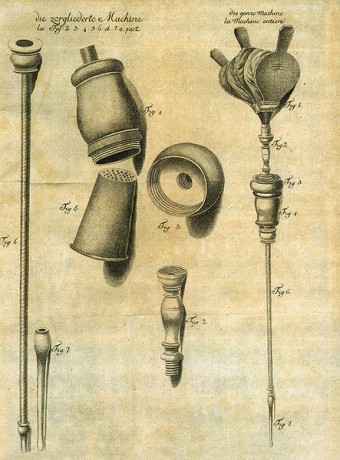 In 1745, Richard Mead was among the first known Westerners to suggest that administering tobacco via an enema was an effective way to resuscitate drowning victims.

By 1774, Doctors William Hawes and Thom­as Cogan, who practiced medicine in London, formed The Institution for Affording Immediate Relief to Persons Apparently Dead From Drowning. This group later became the Royal Hu­mane Society. Back in the 18th century, the society promoted the resuscitation of drowning people by paying four guineas (about £450 today by purchasing power, or $756) to anyone who was able to successfully revive a drowning victim.

Volunteers within the society soon began using the latest and greatest method of reviving such half-drowned individuals, via tobacco smoke enemas. Artificial respiration was used if the tobacco enema did not successfully revive them.  In order that people could easily remember what to do in these cases, in 1774 Dr. Houlston published a helpful little rhyme:

Tobacco glyster (enema), breathe and bleed.
Keep warm and rub till you succeed.
And spare no pains for what you do;
May one day be repaid to you.

The practice of using tobacco smoke enemas on drowning victims quickly spread as a popular way to introduce tobacco into the body to treat an array of other medical conditions including: headaches, hernias, respiratory ailments and abdominal cramps, among many other things. Tobacco enemas were even used to treat typhoid fever and during cholera outbreaks when patients were in the final stages of the illnesses.

In their most rudimentary form, tobacco smoke enemas were not always administered with the aide of bellows. Originally, the smoke was blown up the victim’s rectum with whatever was handy, such as a smoking pipe. Of course, such close contact wasn’t ideal and if the rescuer accidentally inhaled instead of blew, let’s just say things that one should not aspirate could be inhaled. If the person jerked around, mouth contact was also a risk, even more risky considering the person being administered too was sometimes diseased.

In fact, one of the earliest documented references of using such a tobacco enema to resuscitate someone came from someone using a smoking pipe in 1746.  In this case, the man’s wife had nearly drowned and was unconscious.  It was suggested that an emergency tobacco enema might revive her, at which point the husband of the woman took a pipe filled with burning tobacco, shoved the stem into his wife’s rectum and then covered the other end of the pipe with his mouth and blew.  As one would imagine, hot embers of tobacco being blown up her rectum had the intended effect and she was, indeed, revived.

This practice quickly spread, reaching its peak in the early 19th century before, in 1811, English scientist Ben Brodie via animal testing discovered that nicotine was toxic to the cardiac system. Over the next several decades, the popularity of literally “blowing smoke up someone’s arse” gradually became a thing of the past.  Figuratively, though, this practice is still alive and well.