Dr. Robert Buchanan, a Murder, and Killing a Cat in Court 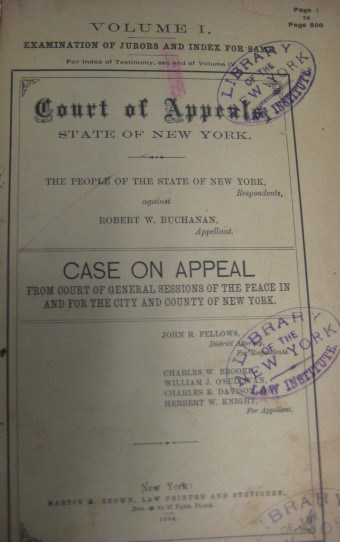 In 1893, Dr. Robert Buchanan was convicted of killing his wife with a lethal amount of morphine. Without any clear physical evidence tying him to her death, the prosecution relied on eyewitness and expert witness testimony, as well as a courtroom demonstration involving a cat, a needle, eye drops and a deadly dose of opiate, to show how Buchanan could potentially have done it.

Robert Buchanan was born in Nova Scotia, Canada, in 1862. Together with his wife and young daughter, he moved to New York City in 1886 to practice medicine. By the summer of 1890, he had divorced his wife and was “becoming acquainted” with a relatively wealthy woman 20 years his senior, who ran a house of prostitution in Newark, New Jersey. Within the year, Anna and Buchanan were married.

The two lived on West 11th Street in New York City, although Buchanan hid the marriage and represented to the world that she was just his housekeeper. The two fought a lot and by the end of 1891, she threatened to leave him. During that winter, Buchanan frequently told friends that “the old hag” was unbearable, and that he had to “get rid of her no matter what it cost.”

Two years earlier, a medical student, Carlyle Harris, had been convicted of killing his wife with morphine when it was shown that she had the telltale “pinpointing of the pupils” that occurs with a morphine overdose. During February 1892, Buchanan discussed this case with many acquaintances and frequently referred to Harris as a “stupid amateur” and “bungling fool,” as well as that he (Buchanan) knew how to eliminate the tiny pupils when taking (or giving) morphine.

The day before Anna’s death, Buchanan began laying his cover story. He told his friend that she was very sick, and that he thought she might not survive (other eyewitnesses countered this claim and noted she was quite well).

On the fateful day, after eating a hearty breakfast alone (Buchanan always ate at his friend’s restaurant), Anna suddenly had such severe pains in her head that she was unable to stand. A physician, Dr. McIntyre, arrived shortly after, but upon examination, opined that she was suffering from hysteria and prescribed one teaspoonful of a bromide of sodium every two hours. When he returned at 2 p.m. her symptoms were worse, so he added two drachms of chloral hydrate to the teaspoon she was to take.

Just after 3 p.m., one of Anna’s friends, Mrs. Brockway, visited and saw Buchanan giving Anna two teaspoons of something – a difference he explained as due to the fact that his spoon was smaller than the standard size (a fact disproven in court). After taking the two teaspoons from Buchanan, she immediately grimaced and then sucked on an orange, as if to get rid of a bitter taste. Within 15 minutes, she fell into a deep sleep from which she never awoke. At another point during the day, a nurse noticed Buchanan bent over Anna, apparently dropping something in her eyes.

When Dr. McIntyre returned that evening with another physician, they noted the now comatose Anna had slow respiration, a rapid pulse, flushed face, hot and dry skin, and normal pupils (the right was slightly dilated). Dr. McIntyre and the other physician both concluded that she had a stroke. She died the next day.

Right away, Buchanan’s mood improved. On the day of her death, he told a friend that “Providence was smiling upon him,” and immediately after the funeral, he went on a pub crawl with his buddies. Throughout his carousing, Buchanan discussed how much he had inherited from his wife (by all accounts $50,000, or about $1.2 million today).

After a few days, Buchanan went back to Nova Scotia where he quickly (within 3 weeks of his wife’s death) remarried his first wife. Returning to New York, Buchanan discovered that Ike White, a reporter, had been looking into the details of Anna’s death. After digging up most of the dirt in the case, Ike was able to heckle the authorities into literally digging up Anna and conducting an autopsy.

“Wonderfully well preserved,” Anna’s body held evidence of sufficiently large amounts of morphine to have done the deed, as well as evidence of atropine – a drug of the belladonna family that dilates pupils and increases heart rates. The autopsy also revealed that she had not suffered a stroke or had any disease that would account for her death.

At trial, Buchanan strongly challenged the prosecution’s scientific evidence, arguing that ptomaine, a product of putrefaction, could be mistaken for morphine and atropine in chemical tests. To counter this evidence, the prosecution, through one of its expert witnesses, put on its appalling demonstration.

A cat was brought into the courtroom and injected with a lethal dose of morphine. As the jury, judge, lawyers and spectators watched, the cat’s pupils constricted, then once drops of atropine were applied, dilated. The cat, of course, died.

Nonetheless, the defense was vigorous, and since the evidence was only circumstantial, many court watchers thought Buchanan might even be acquitted – until he decided to take the stand. Self-obsessed and whiny, the prosecution trapped Buchanan in lie after contradiction after lie until no one was left with any doubt as to his guilt.

Dr. Robert Buchanan was executed in the electric chair in New York’s Sing Sing on July 2, 1895.