This Day in History: September 3rd- A New Calendar 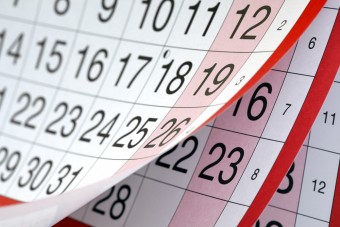 “It is pleasant for an old man to be able to go to bed on September 2, and not have to get up until September 14.” – Ben Franklin

Over six million people living in Britain and the American colonies went to sleep on September 2, 1752, but awoke on September 14. This was thanks to the British Calendar Act of 1750, which finally put the Brits back in sync with a decent portion of the rest of the world.

Until that time, the British had been using the Julian calendar, which had been adopted in Europe when it was put in place in 45 BCE.

By the time of the Roman Empire under Julius Caesar, the previous Egyptian developed calendar, which was out of sync by about three months at this point, was in desperate need of tweaking. So, with the help of Sosigenes, a renowned astronomer from Alexandria, Julius Caesar started a new calendar on January 1, 45 B.C.- a calendar that came closer to the solar year than any of its predecessors and became known as the “Julian Calendar”.

This calendar quickly spread across the entire Roman Empire, and was also used throughout Christendom for centuries. And yet, once again, an error popped up. It turns out that the solar year isn’t actually 365 days and six hours after all, as was the figure used when the Julian Calendar was developed. It’s actually 365 days, 5 hours, 48 minutes and 46 seconds. This only amounts to a discrepancy of about a single day over 130 years, but when you’re talking millennia you have no choice but to nitpick.

By 1582, Pope Gregory XIII was becoming concerned. The lag in the Julian calendar was causing Easter to fall further away from the spring equinox each year. So the Pope ordered a new system, and Aloysus Lilius  (and later Christopher Clavius after Lilius died in 1576) got right on it. They fast-forwarded the calendar by ten days and stated that leap days should not be added in years ending in “00” unless that year can also be divided by 400. These modifications make the Gregorian calendar vary from the solar year by a mere 26 seconds.

Pope Gregory XIII delivered a papal bull on February 24, 1582, decreeing that Roman Catholics would follow the new Gregorian calendar. So Spain, France, parts of Italy, the Netherlands, Portugal, Luxembourg, and Poland all adopted the new calendar later that year. Prussia, Austria, Germany, Switzerland and Hungary, although not Catholic, all followed suit within the next fifty years just because it made good sense to do so.

But England just wasn’t having it.

In 1582, England was still resentful of the backlash from leaving the Catholic Church and establishing the Church of England. Anything from the enemy camp was dismissed out of hand. Some even saw the Gregorian calendar as a tool in some sort of papal plot. But common sense eventually prevailed with British Calendar Act of 1750:

In and throughout all his Majesty’s dominions and countries in Europe, Asia, Africa, and America, belonging or subject to the crown of Great Britain, the second day of September in the said year one thousand seven hundred and fifty-two inclusive; and that the natural day next immediately following the said second day of September shall be called, reckoned, and accounted to be the fourteenth day of September, omitting for that time only the eleven intermediate nominal days of the common calendar.

Incidentally, the Brits were hardly the last hold-outs – Russia did not convert to the Gregorian calendar until after the Russian Revolution in 1917. (The funny thing was, in 1908, the Russian Olympic team arrived 12 days late to the London Olympics because of it.) Greece didn’t climb aboard until 1923. They were so late to the party that these two countries had to skip 13 days to catch up.