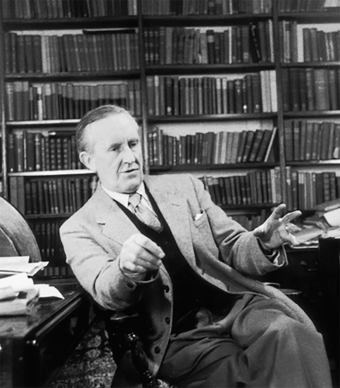 Author, poet, philologist, scholar, and professor, J. R. R. Tolkien is often lauded as the father of the modern fantasy novel. Ranked sixth on a list of top post-WWII British writers, he was also the fifth top-earning dead celebrity in 2009 according to Forbes magazine.

John Ronald Reuel Tolkien was born on January 3, 1892, in South Africa. His family returned to their native England when he was a small child. Tolkien’s parents had died by the time he was 12, so he and his younger brother Hilary were raised by their family’s priest, Father Francis Morgen. Ronald, as he was called, remained a devout Catholic his entire life.

Tolkien was gifted with an exceptional knack for linguistics. While attending King Edward’s School in Birmingham, he was adept at Latin and Greek, and later learned Anglo-Saxon and Finnish. He also developed his own languages, complete with grammar rules and guidelines for usage. During his studies, he became enchanted with the old stories of ancient races with their awesome gods and fated heroes on epic adventures.

While he was in school, he also met a young lady named Edith Bratt. Biographer Humphrey Carpenter noted that during their courtship,

Edith and Ronald took to frequenting Birmingham teashops, especially one which had a balcony overlooking the pavement. There they would sit and throw sugar lumps into the hats of passers-by, moving to the next table when the sugar bowl was empty. … With two people of their personalities and in their position, romance was bound to flourish. Both were orphans in need of affection, and they found that they could give it to each other. During the summer of 1909, they decided that they were in love.

Unfortunately, as a result of the relationship, his grades started to suffer and he didn’t get a hoped-for scholarship to Oxford. Father Francis stepped in and forbade Ronald from seeing or even writing to Edith until he was 21 years old – three long years. Tolkien later wrote a letter to his son in 1941 explaining the situation,

I had to choose between disobeying and grieving (or deceiving) a guardian who had been a father to me, more than most fathers … and ‘dropping’ the love-affair until I was 21. I don’t regret my decision, though it was very hard on my lover. But it was not my fault. She was completely free and under no vow to me, and I should have had no just complaint (except according to the unreal romantic code) if she had got married to someone else. For very nearly three years I did not see or write to my lover. It was extremely hard, especially at first. The effects were not wholly good: I fell back into folly and slackness and misspent a good deal of my first year at college.

Unfortunately for Tolkien, he found after writing a letter to her on the evening of his 21st birthday professing his undying love, that she had become engaged in the interim.  Fortunately, though, while Tolkien at this point in life didn’t have the best prospects, she chose to break off her engagement with one George Field (much to George’s chagrin) and instead married Tolkien.

His lady love ultimately became the source of Luthien, as he explained after her death,

I never called Edith Luthien – but she was the source of the story that in time became the chief part of the Silmarillion. It was first conceived in a small woodland glade filled with hemlocks at Roos in Yorkshire (where I was for a brief time in command of an outpost of the Humber Garrison in 1917, and she was able to live with me for a while). In those days her hair was raven, her skin clear, her eyes brighter than you have seen them, and she could sing – and dance. But the story has gone crooked, & I am left, and I cannot plead before the inexorable Mandos. 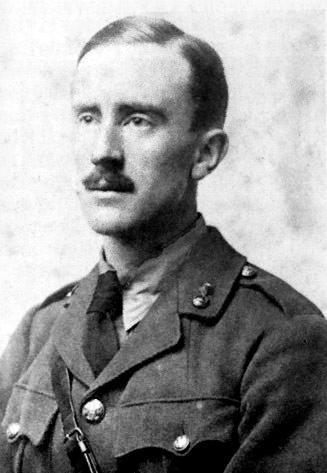 He served in the army during World War I and suffered the horror of losing all but one of his close friends on the battlefield, as well as frequently suffered from various illnesses. It was during this time that he began writing some of the stories that would serve as the backbone of his future works and ultimately more directly resulted in The Silmarillion.

This brings us to 1930, when Tolkien jotted these words in the margin of a test paper, “In a hole in the ground lived a hobbit.” This grew into a simple good-triumphing-over-evil fairy tale he would tell his kids. Over the next few years, his friends, including C.S. Lewis, read the manuscript of The Hobbit and gave it rave reviews. It was published and hugely successful, so everyone was all about Tolkien serving up a sequel.

So it was that Tolkien wrote The Lord of the Rings over a period of many years. It was nothing like his first book, neither in tone nor dimension. This was no cut and dried adventure story. The Lord of the Rings was an epic with spiritual and moral undertones, not a book to read to little tikes in blanket sleepers.

The publishers were worried about its commercial viability and released it in three parts in 1954-55. (The Fellowship of the Ring, The Two Towers, and The Return of the King.) They also refused to pay Tolkien an advance until the book(s) turned a profit. They needn’t have worried.

In the mid-1960s, Tolkien reached an almost unimaginable level of fame for a (living) British author when The Lord of the Rings was released as a paperback in the United States. Tolkien was flattered by the attention, but a bit put off by the idea that the latest fad was tripping on acid and reading his book. He also could have done without the phone calls in the middle of the night from California asking if Balrogs had wings.

So he and Edith changed their phone number and moved to a seaside community where many other wealthy retirees flocked. No one was more surprised than Tolkien at the amount of money his books raked in.

J.R.R. Tolkien died on September 2, 1973, and was buried next to his beloved Edith, who had passed on two years before.  On their shared tombstone, the engraving reads