This Day in History: September 4th- The Little Rock Nine 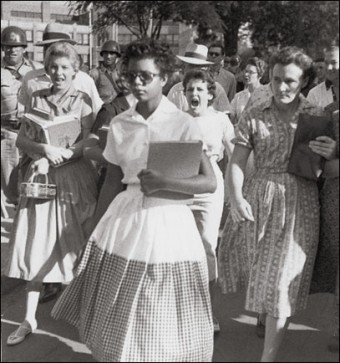 On September 4, 1957, Arkansas Gov. Orval Faubus ordered the National Guard to block the entry of nine black students from Central High School in Little Rock. Faubus was acting in direct defiance of a Supreme Court order, in what author Taylor Branch calls “the most severe test of the Constitution since the Civil War.”

In May 1954, the United States Supreme Court, in its landmark Brown v. Board of Education decision, ruled that the segregation of America’s public schools violated the 14th Amendment to the Constitution. The Court issued a second order, called Brown II, that school districts must integrate “with all deliberate speed” in 1955.

Little Rock made plans for the gradual integration of its schools, beginning with the high schools in September 1957. Two groups quickly formed to oppose desegregation – the Capital Citizens Council and the Mother’s League of Central High School. Arkansas Gov. Orval Faubus was also bitterly opposed to racial integration in the state’s schools.

Gov. Orval Faubus announced on September 2, 1957, that he intended to call in the National Guard to prevent these students from entering Central High, insisting that bloodshed might ensue if he allowed them to attend classes. He was acting in their best interests, you see…

The next day, The Mother’s League held a service at sunrise at the school protesting integration. Federal Judge Richard Davies, unimpressed, issued an order later that day that desegregation would continue as planned at Little Rock Central High School.

On the morning of September 4, 1957, eight of the teenagers came to school together, but 15-year-old Elizabeth Eckford didn’t have a phone and couldn’t get in on the carpool plans. She arrived alone at the opposite end of the campus. She later recalled, “I tried to see a friendly face somewhere in the mob—someone who maybe would help. I looked into the face of an old woman and it seemed a kind face, but when I looked at her again, she spat on me.”

All of the kids were met by angry crowds and were not allowed to enter the school building by the Arkansas National Guard.

In response, President Eisenhower sent in the U.S. Army’s 101st Airborne Division, and “The Little Rock Nine” began their first full day of classes under federal protection on September 25th.