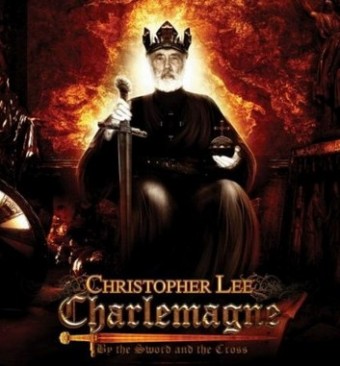 While many seniors celebrate their birthdays playing Bingo, followed by a late dinner at the Denny’s at 3pm, actor Christopher Lee had other plans this year- he was busy rocking out.

Lee partnered with guitarist Richie Faulkner of Judas Priest fame on a heavy metal album that was released on his 91st birthday. The album is based on the life of Charlemagne. If you didn’t find this odd enough, you should know that this isn’t Lee’s first metal album. It’s also not his first music album on the topic of Charlemagne. Lee’s first metal album, Charlemagne: By the Sword and the Cross, was released in 2010. It was followed by the aforementioned album made with Richie Falkner, Charlemagne: The Omens of Death, which came out May of 2013.

Lee is best known not as a rocker, of course, but for his iconic acting roles. He played Saruman in The Lord of the Rings trilogy, Count Dooku Star Wars Episode II: Attack of the Clones, a James Bond villain and Dracula, among dozens of other roles. One character he’s never played is Charlemagne; so why the musical tribute to the eighth century ruler? It turns out, Lee shares a branch on the family tree with the first Holy Roman Emperor. (Go ahead, try not to read this next part in Lee’s amazing voice), “I am through the Carandini family actually descended from Charlemagne”.  (For reference, that’s on his mother’s side.)

In a separate interview, he talked about the ruler’s influence, still being felt today. “Throughout Charlemagne’s life, there had been key events which could have taken various turns, and these have shaped the world in which we live today. He was the ‘Father of Europe’ and responsible for carving the map as it is today.”

Before his 2010 album, Lee was no stranger to recording music. He has a classically-trained voice and has had songs included on the soundtracks from several of his movies, such as on the soundtracks for The Wicker Man and The Return of Captain Invincible. Between 1986 and 1998, he recorded several opera pieces, as well as songs from other genres. His first foray into metal music came in 2005, when Lee provided some vocals, along with his daughter, on the album From Chaos to Eternity, by the Italian metal band Rhapsody of Fire. Lee followed that in 2006 by combining two different genres of music and performed a heavy metal version of the “Toreador Song” from the opera Carmen. In 2012, he also released an album of covers of heavy metal Christmas songs called A Heavy Metal Christmas.

In case you’re wondering if Lee is any good in the metal genre and don’t want to click the above links to listen to some of his tracks, his first metal album, By The Sword And The Cross, was critically acclaimed and won a Metal Hammer Golden Gods “Spirit of Metal” award.