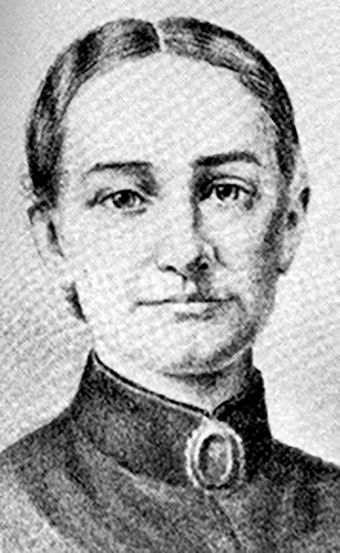 Americans Narcissa Whitman and her husband, Marcus (a physician) in 1836 headed west with another couple, missionaries Henry and Eliza Spalding, on their way to Oregon. The foursome made the grueling trip with a caravan of fur traders for most of the journey for protection. Along the way, Narcissa and Eliza became the first known white women to cross over the Rocky Mountains.

Narcissa noted during the journey, “I  never was so contented and happy before neither have I enjoyed such health for years.”

In contrast, after a pregnancy that resulted in a stillborn child during the trip, and with her health deteriorating, Eliza stated, “We are now 2,800 miles from my dear parent’s dwelling… Only He who knows all things, knows whether this debilitated frame will survive the undertaking. His will, not mine, be done.”

But she did make it, as did the Whitmans and on September 1, 1836, the Whitman’s reached the Walla Walla River in Washington. (The Spaldings ultimately decided to settle in Idaho.)

With great enthusiasm and optimism, the Whitmans established a mission in Walla Walla for the Cayuse Indians. Marcus held church services and practiced medicine while Narcissa taught in the mission school. Upon arrival, Narcissa noted, “We never had greater encouragement about the Indians than at the present time.”

But this optimism soon turned sour. When the Cayuse didn’t immediately shed their heathen ways and embrace Christianity and Anglo customs, the Whitmans became repulsed by them, finding them sinful, lazy and “filthy.” Narcissa further noted in her journal that, “We have come to elevate them and not to suffer ourselves to sink down to their standard.”  As one biographer stated concerning Narcissa’s journal entries, “Her attitude toward those among whom she lived came to verge on outright repugnance.”

As for their failure to convert the Natives where other missionaries elsewhere had seen much more success, analysis of their journal entries and other such primary sources seems to indicate that the Whitmans made no attempt to frame their religious message in a way that the Cayuse would find understandable or relatable, nor did they make any accommodations for the Native’s existing beliefs.

The Whitmans’ two-year-old daughter, Alice Clarissa, however, picked up the native language as quickly as English and was reportedly a great favorite among the Cayuse. The child may have served as a bridge between the Anglo and the Native worlds, but, unfortunately for all, the little girl drowned on June 23, 1839 after bending over to scoop some water out of a river and slipping and falling in.  She was pulled out shortly after, but efforts to revive her failed.

Due to lack of results, the Board of Commissioners back east funding the operation voted to close it down and send the Whitmans elsewhere. Unwilling to leave, Marcus went back east to personally try to reverse the ruling. About a year later, he came home leading approximately 1,000 pioneers up the Oregon Trial in the first great migration west.

It does not concern me so much what is to become of any particular set of Indians, as to give them the offer of salvation through the gospel and the opportunity of civilization, and then I am content to do good to all men as “I have opportunity.” I have no doubt our greatest work is to be to aid the white settlement of this country and help to found its religious institutions…

I am fully convinced that when a people refuse or neglect to fill the designs of Providence, they ought not to complain at the results; and so it is equally useless for Christians to be anxious on their account. The Indians have in no case obeyed the command to multiply and replenish the earth, and they cannot stand in the way of others doing so.

So it was that with their efforts largely unsuccessful on the missionary front, the Whitmans gave that up in all but name, adopted 11 orphaned children whose parents had died on the journey west, and lent all their energies to assisting pioneers.

From all accounts, the Cayuse already found the Whitmans onerous enough at this point, but the fact that they appeared to be behind this huge rise in white colonization made them even less popular. Resentment built as the Cayuse struggled to feed themselves competing for the once bountiful game.

This all came to a head when a measles outbreak carried in by the latest round of 5,000 American immigrants during the fall of 1847 killed half of the Cayuse people and almost all of their children.  When the Cayuse observed that relatively few white people were dying under the care of the Whitmans, but their own that they sent for medical care to the couple were dying in droves, they blamed them. Likely there was nothing nefarious going on here; it was simply that the white settlers’ immune systems were better able to handle the outbreak.

But the Cayuse knew nothing of this. So it was that on November 29, 1847, several Cayuse under Chief Tiloukaikt attacked the Whitman mission, killing 14 including putting a hatchet in the head of Marcus and murdering Narcissa Whitman and then reportedly whipping her corpse. A militia group countered by killing a group of Cayuse and the situation escalated into an all out war.

Ultimately five members of the tribe were handed over to be tried for the massacre that had kicked off the bloodshed. They were convicted and subsequently executed on June 3, 1850.  One of the executed tribesman, Kimasumpkin, had this to say,

I was not present at the murder nor was I any way concerned in it. – I am innocent – it hurts me to talk about dying for nothing. Our chief told me to come down and tell all about it. – Those who committed the murder are killed and dead. The priest say I must die tomorrow, if they kill me I am innocent… My Young Chief told me I was to come here to tell what I know concerning the murderers. I did not come as one of the murderers, for I am innocent. – I never made any declaration to any one that I was guilty. This is the last time that I may speak.