March 26, 2014 Emily Upton
Greg H. asks: Diseases from Europe wiped out most of the Indians, so why didn’t the Europeans also get wiped out by diseases from America? 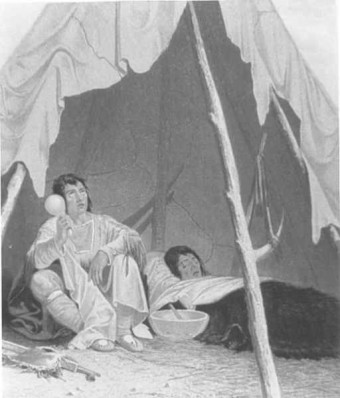 While estimates vary, approximately 20-50 million people are believed to have lived in the Americas shortly before Europeans arrived. Around 95% of them were killed by European diseases. So why didn’t 19 out of 20 Europeans die from Native American diseases?

The short answer is that Europeans simply had more robust immune systems. Several factors contributed to this: first, Europeans had been the caretakers of domestic animals for thousands of years, and had over time grown (somewhat) immune to the common diseases that accompanied the domestication of such food sources. Native Americans, on the other hand, were largely hunters and gatherers, and even in some domestication cases, it’s thought exposure was limited.  For instance, as Jared Diamond, author of Guns, Germs, and Steel states,

The Incas had llamas, but llamas aren’t like European cows and sheep. They’re not milked, they’re not kept in large herds, and they don’t live in barns and huts alongside humans. There was no significant exchange of germs between llamas and people.

Second, Europeans lived in more densely populated areas than Native Americans. When so many humans live together in relatively close quarters (particularly with lack of good, or any, sewage systems and the like), disease spreads quickly with the general population continually getting exposed to numerous pathogens. The Europeans’ bodies had to adapt to dealing with many of those diseases, and for those who survived, their immune systems thrived as a result.

The third factor is travel and exchange. Groups of people and animals moved around a lot in Europe and had interactions particularly through war and trade, resulting in the spread of disease across continents—and, eventually, some level of immunity for the survivors.

That said, it should be noted that Europeans were also commonly killed off by the diseases they brought to the New World. It’s just that over time those who were more susceptible to these diseases died off and the survivors’ immune systems had developed to the point where the general populace wasn’t typically being wiped out at rates anywhere close to 95%, though the numbers were often still extreme by today’s standards.

But contrary to popular belief, it wasn’t all one sided.  It’s believed that one Native American disease did slip on to the European ships and sailed onward to Europe doing some major damage in the process.  That disease was syphilis.

Columbus “sailed the ocean blue” in 1492. Just three years later, in 1495, the first syphilis epidemic broke out among armies in Italy at the Siege of Naples, seemingly brought by French soldiers who in turn probably got the disease from Spanish mercenaries. Because of the French popularly spreading it, syphilis was initially known as the “French disease.”

There was up until very recently some debate about whether or not syphilis was in fact a “New World” disease because there are over 50 skeletons that have been found with all the markings of syphilis being the cause of death and that were once thought to date to pre-Columbian times. However, advancements in dating technology and a recent (2011) comprehensive study published in the Yearbook of Physical Anthropology looking at all of the skeletons placed those people’s deaths after Columbus returned from the Americas.

The initial syphilis epidemic is thought to have killed upwards of a few million Euopeans as it made its rounds. Artist Albrecht Dürer remarked,

God save me from the French disease. I know of nothing of which I am so afraid … Nearly every man has it and it eats up so many that they die.

The disease continued to be a problem into the 20th century. It’s caused by bacteria Treponema pallidum, which can attack the nervous system, heart, brain, and internal organs, causing a variety of health problems and, sometimes, death. A cure wasn’t developed until the 1940s with the development of penicillin.