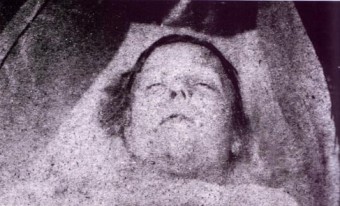 Just before 4 am on August 31, 1888, on London’s seedy Buck’s Row, a cart driver named Charles Cross saw the body of a woman lying on the ground. In the early morning gloom, it was initially impossible to tell if she was drunk or dead. Cross was soon joined by another carter, Robert Paul. The two men saw the woman’s skirts were pulled above her waist. They smoothed them back over her knees and went searching for a policeman.

What the two carters didn’t notice in the shifting shadows was the woman’s throat had been cut so brutally that her head had almost been decapitated. Beat officer John Neil discovered that gruesome fact on closer inspection of the body. (He later testified at the inquest that when he had passed that way just 30 minutes earlier, “there was not a soul about.”)

P.C. Neil sent another colleague to fetch a local medic and soon Dr. Rees Ralph Llewellyn arrived on the scene. He quickly examined the body and found that the arms and legs were still warm. Llewellyn believed the woman had been dead for less than 30 minutes. Her killer may have still been lurking nearby when Cross and Paul came upon the body. (Recent speculation has even pointed fingers at Cross himself being the killer.)

The victim was soon identified as Mary Ann “Polly” Nichols, a 44-year old alcoholic and prostitute. As noted, her throat had been cut ear-to-ear down to the vertebrae and the large blood vessels on both sides of her neck had been severed. There were also several very deep horizontal wounds on Polly’s lower abdomen, and three violent wounds running downwards as well.

Nichols had last been seen by her friend Emily Holland around 2:30 a.m. She was off to raise the money needed to secure a bed in a lodging house and assured Holland she’d be back soon. Polly said that she’d already made the money she needed a few times over that evening, but drank her earnings instead of paying for a room. So Polly stumbled off into the night and her unhappy fate.

On Buck’s Row, the killer, most likely posing as a customer, managed to clap a hand over Nichols’ mouth and slit her throat without a single person hearing, despite some workers in a building nearby. Even more incredibly, he had time to mutilate her and then slip silently into the night.

One would think he’d be detected by the blood he’d undoubtedly be covered in, but as the coroner testified at the inquest, “If, however, blood was principally on his hands, the presence of so many slaughter-houses in the neighborhood would make the frequenters of this spot familiar with blood-stained clothes and hands, and his appearance might in that way have failed to attract attention while he passed from Buck’s-row in the twilight into Whitechapel-road, and was lost sight of in the morning’s market traffic.”

So it was that London’s East End was put at the mercy of one of the most notorious serial killers in history – Jack the Ripper.