How many of you science fiction buffs have fantasized about zipping around town in your very own flying car? Sure, a trip in a helicopter or airplane has now become the standard or even mundane mode of long distance travel, but imagine taking your very own flying machine on a trip across town, presumably with The Jetsons’ theme song blasting in the background. With advances in modern technology, it is only a matter of time right? What may surprise you though, is that way back in 1942, twenty years before Americans were meeting George Jetson and marveling at The Jetsons‘ flying car, the British Military actually had their very own flying jeep.

It was right smack in the middle of the Second World War and the military needed to find a way to airdrop more than messages, medical supplies or rations. They wanted to sky dive off-road vehicles to provide transportation for their infantry soldiers and other military personnel. They had previously tested the Hafner Rotachute, a rotor equipped parachute towed by an airplane with the objective of delivering armed soldiers more precisely to the battlefield, and they figured they could apply similar technology to a large vehicle. 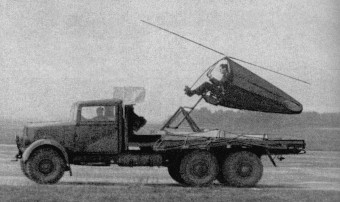 So they looked to Raoul Hafner again. Hafner was an Austrian engineer – a contemporary and admirer of Juan de la Cierva, that Spanish pioneer of rotary-winged flight – with a passion for helicopters. Hafner first designed the Rotachute and later conceptualized its spin-off the Hafter Rotabuggy. While both machines used rotor technology, the Rotachute was actually a fabric-covered capsule with room for one pilot and a notch for his weapon with fairing in the rear and an integrated tail. After various modifications, the first successful launch occurred on June 17, 1942 from a de Havilland Tiger Moth. Taking off, the airplane towed the Rotachute on a 300 foot towline and released it at an altitude of 200 feet. A rough landing necessitated further improvements in the form of a stabilizing wheel and fins to improve stability. 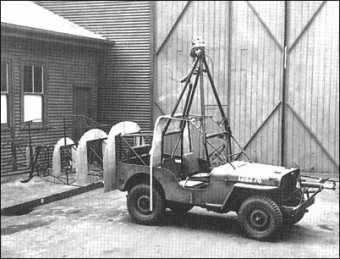 In the case of the Rotabuggy the question was how to build a vehicle that they could fly and drop from a height without causing damage. They did some tests using a regular (non-flying) 4×4 wartime jeep- a Willys MB- loaded with concrete and discovered that dropping it from heights up to a pretty impressive 2.35 metres (7.7 ft) could work without damaging the unmodified jeep.

With durable jeep in hand, they then outfitted it with a 40 ft rotor as well as a streamlined tail fairing with twin rudderless fins. For added toughness, they attached Perspex door panels, while stripping it clean of its motor. Inside they installed a steering wheel for the driver and a rotor control for the pilot and other navigational instruments. So visually you had the now-bantamweight jeep in front with two guys inside, a driver and a pilot, a rotor on top and a tail bringing up the rear. Welcome to the Blitz Flying Jeep! 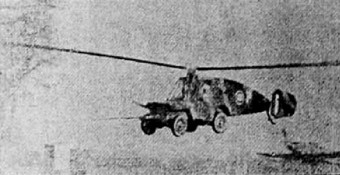 In November of 1943, the flying trials started at Sherburn-in-Elmet, near Leeds. The first challenge was how to get the jeep up in the air. As so often happens with first attempts, during the first test flight the jeep literally failed to get off the ground. It ended miserably as they used a lorry to tow the flying jeep but it couldn’t get enough speed to lift the Willys MB airborne. During the second attempt, the jeep was towed by a heavier and more powerful Bentley automobile and it flew, gliding at speeds of reportedly about 45 to 65 mph. Later, they tested the jeep behind an RAF Whitley bomber, managing to achieve an altitude of about 122 meters (approximately 400 ft) in one ten minute flight in September of 1944. 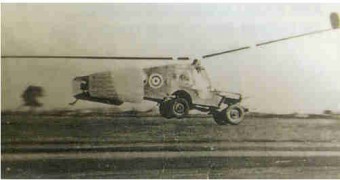 While the records show that in the end the Flying Jeep worked very satisfactorily, there is an account of a witness who observed a rather shaken and exhausted pilot emerge to lie down relieved after one terrifying test flight. Apparently it had taken superhuman effort for him to handle the control column on that particular flight, which led to a rather scary, bobbing and weaving, bumpy ride. When the jeep finally dropped safely to the ground, the driver took over. After the vehicle came to a stop, reports say the ensuing silence was protracted, then the pilot was helped out to a spot adjacent to the runway where he lay down to rest and collect himself.

Although the Flying Jeep machine was improved with upgraded fins and rotor functionality, perhaps it was just as well that its further development was abandoned after military gliders, like the Airspeed Horsa, that could transport vehicles, were introduced.