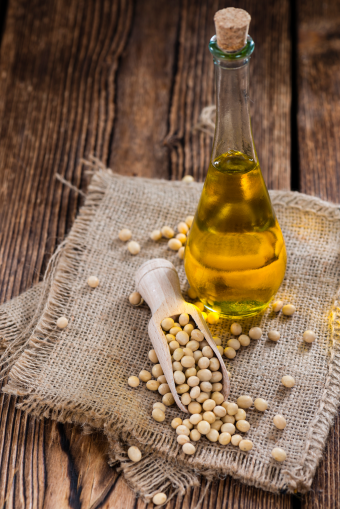 Start with a New Jersey businessman who has questionable ethics, add soybean oil, and let it stew in a broth of fraud and greed. Pretty soon you’ve got yourself a nice little scandal.

In the late 1940s, a combination of several factors led to an enormous increase in the production of soybean oil in the United States. The factors: soybeans are relatively cheap and easy to grow; they produce beans quickly; advances in technology allowed for better extraction of oil from the beans (as well as the production of safer and better-tasting oil); and in the post-World War II economic boom, the demand for products that could be made from soybean oil grew enormously. Those products included nonedible items, such as paint and plastics, and a wide variety of foods and cooking products, including margarine, salad dressings, and cooking oils. Before World War II, the most popular cooking oils in the U.S. were butter, lard, and Crisco, which was made from cottonseed oil. By the 1950s, the United States was the world’s leading soybean oil producer, and by the early 1960s, there was a soybean oil surplus.

THE MAN WITH THE PLAN

Anthony “Tino” De Angelis was born in the Bronx in 1915, the son of Italian immigrants. He worked for a few years as an apprentice butcher. Then, while still in his 20s, he bought his own hog-meat company, and in 1946, bought controlling interest in Adolf Gobel Inc., a large meatpacking business in North Bergen, New Jersey.

De Angelis quickly learned what so many others have learned over the years—that the U.S. government could be an extremely lucrative cash cow. That same year, President Harry S. Truman had signed the National School Lunch Act, establishing a federally funded school-lunch program. De Angelis landed a contract to supply the program, and over the next several years made a fortune selling millions of pounds of meat to the government.

Somewhere along the line—maybe from the start—De Angelis turned the operation into a scam. In 1952 that scam was discovered, and the government charged De Angelis with systematically overcharging the government and, worse (considering the meat went to schoolkids), selling uninspected meat. De Angelis paid $100,000 in damages (almost $900,000 in today’s dollars), and Adolf Gobel Inc. went bankrupt.

FOOD FOR PIECE (OF THE ACTION)

In 1955 De Angelis, described by Wall Street Journal writer Norman C. Miller as “a fat little man…with a bland moon face and a somewhat squeaky voice,” founded the Allied Crude Vegetable Oil Refining Company. This was a massive vegetable oil refinery and storage facility in Bayonne, New Jersey, across the Hudson River from Brooklyn and right in the heart of the bustling Port of New York and New Jersey. Allied Oil was another De Angelis operation aimed at taking advantage of a government initiative, this one the “Food for Peace” program signed into law by President Dwight D. Eisenhower in 1954. Through this program, the U.S. sold surplus agricultural products to foreign governments at low cost, with the combined goals of helping struggling nations, building up good relations with those countries, and providing another market for U.S. farmers.

Allied quickly became a major player in the program, buying raw vegetable oil from U.S. farmers—primarily soybean, but also some cottonseed oil—refining it in the Bayonne facility, then selling and shipping it to foreign countries. By the late 1950s, the company was selling more than $200 million worth of vegetable oil a year (almost $2 billion today), and De Angelis was an international business tycoon, making deals with businessmen and politicians all over the world. But things were not exactly what they seemed.

In 1957 De Angelis set up a deal with a company known as the American Express Field Warehousing Corporation (AEFW), a subsidiary of financial giant American Express. “Field warehousing” is a financial arrangement wherein a company gives a financial institution control of their warehouse and inventory. The financial institution monitors how much inventory is being held and issues “warehouse receipts” based on the value of that inventory. Those receipts can then be used as collateral at a bank or brokerage house against a loan.

In this case, AEFW oversaw Allied Oil’s storage yard—138 massive tanks—and started writing large warehouse receipts, which De Angelis quickly and happily used as security for borrowing cash. For all intents and purposes, American Express was underwriting enormous loans for Allied. Over the following couple of years, because a respected company like American Express was giving De Angelis the thumbs up, other companies, including Bank of America and Proctor and Gamble, started loaning money to Allied Oil, too.

Almost from the start, De Angelis was scamming and AEFW was blind to it. In the normal setup for field warehousing, AEFW hires “trusted” employees of the client company (Allied Oil) as “custodians,” to keep tabs on the inventory, and AEFW inspectors show up regularly to make sure the inventory checks are accurate. Only problem: AEFW let Tino De Angelis pick the custodians. He picked his friends and relatives—and they just made up the numbers.

And when AEFW inspectors did show up, De Angelis and his gang had a simple way of tricking them: to check how much oil was in any given tank, an inspector would climb up to the top of the tank, open a hatch, and measure down from the top of the tank to the surface of the oil. A little math then allowed the inspector to determine how much oil was in the tank. The scam: oil floats on water, and many of Allied’s tanks were almost entirely filled with water, with just a little oil on top. So the inspectors, looking down from the top of a tank, thought they were looking at a tank full of oil. What’s more, the tanks were all interconnected by a maze of piping, so De Angelis’s custodians could pump oil from one tank to another—to the ones being tested—at will, making it look like they had more oil than they actually did. As far as the American Express inspectors could tell, Allied Oil had huge stores of oil…and the loan money kept rolling in.

De Angelis followed up on the second part of the plan—buying a huge amount of soybean oil futures—which in and of itself actually did cause the price of soybean oil to rise (because it looked like investors were confident the price would keep going up). But he didn’t have enough money, so he couldn’t buy enough oil to corner the market. In fact, he didn’t buy much oil at all. By early 1963, a growing number of customers were complaining that oil that had been paid for was not being delivered. At the same time, banks were complaining about missed loan payments. By mid-1963, the complaints grew loud and numerous enough that AEFW—finally—made their inspectors do a thorough check of De Angelis’s tanks. By November 1963, the jig was up.

The truth about Allied Crude Vegetable Oil Refining Company hit the market like a financial atomic bomb: Tino De Angelis’s company had borrowed more than $150 million from 51 different financial institutions, many of them among of the oldest and most prominent Wall Street firms in existence…and he actually had only $6 million worth of oil. The price of soybean oil plummeted immediately—meaning that the little oil that De Angelis did have was now worth even less.

On November 19, Allied Oil declared bankruptcy. It was such an enormous scandal—at the time, the largest case of financial fraud in history—that New York Stock Exchange officials had to scramble to avoid a stock market crash. Three days later, on Friday, November 22, 1963, President John F. Kennedy was assassinated, adding to the financial panic. With a crash now seemingly imminent, stock exchange officials organized a bailout of two of the largest and hardest-hit Wall Street brokerage firms, and were able to avert a crash.

Of the 51 institutions that ended up victims of De Angelis’s slippery swindle, two were knocked out of business for good; the rest lost money, in amounts ranging from substantial to gargantuan. American Express, probably deservedly so, was the hardest hit. Their stock price tumbled more than 50 percent, and they ended up losing somewhere around $58 million.

Tino De Angelis was convicted of charges related to fraud and conspiracy in 1965 and was sentenced to 20 years in prison. During the trial, it was revealed that he had hidden more than $500,000 in a Swiss bank account, but millions more of the loan money was never accounted for. De Angelis was released from prison in 1972 after serving seven years. Not long after that he did another stint in prison, this time for a scam involving a Missouri meat company. De Angelis was last heard from in 1992, when he was arrested in yet another food-related scam. (The 78-year-old had been caught trying to buy $1.1 million worth of meat from a Rochester, New York, company with a forged check.) De Angelis was sentenced to 21 months in prison. His fate after that…is simply unknown.

In 1964, when American Express was still reeling from the massive hit to its finances and its reputation caused by the salad oil scam, an investor swooped in and bought $20 million worth of AmEx stock, garnering a five percent stake in the company. At the time, American Express was a leader in the new credit card industry, which the investor believed would one day become a part of daily life around the world. He was right. That investor: Warren Buffett. As of today, he has made in the neighborhood of $3.7 billion from the deal.