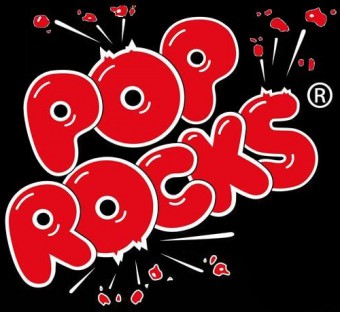 Today I found out why Pop Rocks pop.

Much like other hard sugar candies, Pop Rocks are made primarily of sugar, corn syrup, water, and artificial flavoring.  It turns out, what causes it to pop when it comes in contact with the moisture and heat in your mouth is not due to any ingredient.  Rather, it is due to the way the candy is made, which we know in detail thanks to the fact that the manufacturing process is patented and thus the process is laid out for all to see in the patent.

Basically, what they do is heat the ingredients together, bringing the mixture to boil.  They continue to boil it until the moisture level descends suitably so that a thick syrupy substance remains.  In normal hard sugar candies, this substance is then put in molds and allowed to cool and harden.  With pop rocks, they expose the hot mix to carbon dioxide at about 600 pounds per square inch worth of pressure.  This ends up forming very small bubbles of carbon dioxide within the mix.  The substance is then cooled and subsequently hardens.

Once the hard candy is formed, the pressure is released.  This causes the candy to shatter, leaving small nuggets of hard candy, which are the Pop Rocks.  Many of these  nuggets still contain pockets of carbon dioxide kept at relatively high pressure.  When the candy hits the saliva in your mouth, it quickly dissolves the thin barriers containing the pressurized carbon dioxide.  This results in the bubbles bursting fairly quickly, releasing the trapped carbon dioxide, often with sufficient force to cause the candy to pop and sometimes jump in your mouth.