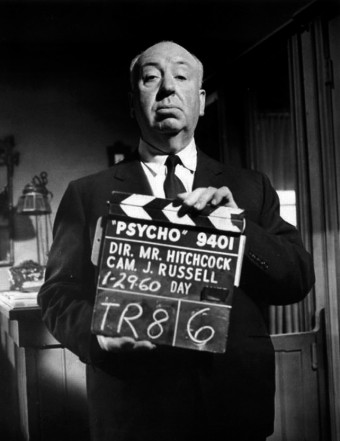 When it was released in 1960, Psycho was one of the most controversial films of the day, thanks in part to the surprising (for the time) depictions of violence and sexuality it contained. In an effort to keep spoilers to a minimum and thus ensure audiences were as surprised as possible by the film’s more shocking twists and scenes, Hitchcock went to some rather extreme lengths to keep the film’s basic plot a secret.

For starters, one of the first things Hitchcock did after reading the original 1959 novel the film was based on- Psycho, by Robert Bloch- and deciding that he just had to adapt it to film, was charge his assistant with purchasing as many copies of the book as possible to keep it out of public hands. Exactly how many copies Hitchcock managed to get his hands on isn’t known, but it is generally thought that he came reasonably close to purchasing every copy on the shelves at the time. This must have been nice for Bloch, at least financially, who not only got a little over $9,000  (about $71,000 today) for the movie rights to the novel, but a nice payout for all the extra copies Hitchcock purchased.

Although Hitchcock was positively enamoured by the novel’s twists and shocking content (which was partly inspired by the killings of Ed Gein, who also inspired the Texas Chainsaw Massacre movies) Paramount Pictures weren’t. They particularly didn’t like the fact that Hitchcock’s contract with them only guaranteed he’d do one other film for them.  They did not want it to be Pyscho.

To try and dissuade Hitchcock from pursuing the film any further, executives more or less attempted to halt production at every turn, which only strengthened the director’s resolve. For example, the studio refused to give Hitchcock his usual budget, offering him just shy of a million dollars instead of the $3 million and change they’d given him for his previous film, North by Northwest.

Rather than scrap the project, as they hoped, a defiant Hitchcock decided instead to simply film the movie using a television crew mostly borrowed from his show, Alfred Hitchcock Presents and shoot the entire thing in black and white. Hitchcock also managed to secure the film’s main two actors, Janet Leigh and Anthony Perkins, for a fraction of their usual fees saving tens of thousands of dollars. He also, as a demonstration of his faith in the project, turned down his normal pay and instead very wisely opted for a percentage of the film’s ultimate returns, reportedly at a whopping 60%.

In a further attempt to get him to scrap the project in favour of something they deemed better to complete his contract with them, Paramount Pictures told Hitchcock their sound stages and other such needed equipment were completely booked, even though they weren’t. Again, Hitchcock was undeterred and moved production over to Universal Studios. Ultimately Paramount gave in and green-lighted the project, though at this stage not nearly as involved in it as they’d normally have been.

This proved to be a boon to Hitchcock as he was free from executive meddling. It also allowed him to film on what was essentially a closed set, helping to insure that no details of the plot leaked.

To further make sure of this, Hitchcock made every member of the cast and crew promise that they wouldn’t talk about the film, its plot, or twists- rumor has it by making each and every one of them say in front of him “I promise I shall not divulge the plot of Psycho”.

Even after the film was finished, Hitchcock barred both Leigh and Perkins from giving any interviews concerning it, instead choosing to promote the film almost entirely by himself.

To avoid giving away any potential details about the plot, Hitchcock promotional efforts focused wholly on alluding to the film’s shocking twists and content, without giving away any details.  For instance, he sent a guide to theatres instructing them what to do in the event someone had a heart attack while watching the film. This is something Hitchcock would later double down on at initial screenings by hiring “nurses” to stand around theatre lobbies.

Hitchcock also took out a number ads in the lead up to the film’s release that merely featured an image of himself pointing sternly at his watch with a statement that said nobody who turned up to the film late would be permitted to see that showing of it.

Other ads, and even a clip at the end of the film, featured an image of Hitchcock encouraging those who watched it not to spoil the film for others saying things like,”After you see Psycho, don’t give away the ending, it’s the only one we have.” and “If you can’t keep a secret, please stay away from people after you see Psycho.”

The final means with which the plot could potentially be spoiled early was with movie critics. As such, Hitchcock didn’t allow critics to see an advanced copy, suggesting instead that they watch it on release day like everybody else. Annoyed critics generally responded by savaging the film and, as Hitchcock had suspected they would, giving away plot points he’d tried so hard to protect in their rushed, release day reviews. For example, in their 1960 review of the film, Variety mentioned that the film contained several “graphically-depicted knife murders”.  After the film was a smashing success with the public, many of the critics who’d initially called the film a schlock,  bravely changed their opinion and began referring to it as a masterpiece of cinema.

Paramount similarly forgot all about how they’d initially tried to can the film before production began and heroically tried to ride Hitchcock’s coattails after the film proved to be one of the most profitable they’d ever produced up to that point, grossing about $32 million (about $252 million today) in its initial run off the ultra-tight budget they’d given Hitchcock.