August 12, 2015 Karl Smallwood
John asks: Are fireman’s poles really a thing or is that just something in TV and movies? 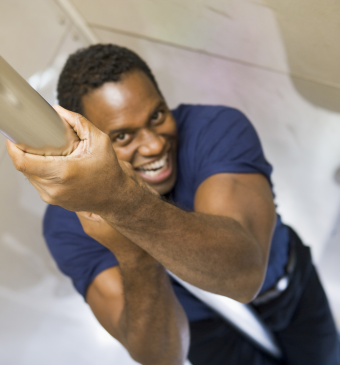 Fireman’s poles, sometimes simply referred to as “fire poles” are a staple of fictional fire-fighting and Ghostbusting. Though these devices have helped save real world firefighters valuable seconds over the decades, they’re now in a strange state of flux and nobody really knows if they’re going to be phased out or not.

It’s reported that prior to the invention of the fire pole in 1878, most fire stations simply contained a set of stairs that firefighters would have to descend whenever an alarm rang. At this time, stairs in fire stations were almost always of the spiral variety, legend has it to stop curious horses from venturing upstairs and inevitably getting stuck. Of course, documented instances of this ever happening are seemingly non-existent as far as I can find, and the supposed problem could have easily been solved by simply tying up the horses or putting them in stalls, among other simple solutions. And, let’s face it, you don’t just let horses you might need at the ready at a moment’s notice wander around as they please, so it may well be that spiral staircases were common in fire stations at the time for the same reason most other spiral staircases are put in- to save space.

If you’re curious about why firefighters of this age spent the majority of their time above the ground floor, that has a lot to do with how firehouses back then were constructed, to quote:

“The majority of firehouses in the nineteenth century were two or three stories. Typically, the horse-drawn fire carriages (and horses) would occupy the first floor, the second floor would be the firefighters’ sleeping quarters, and, in some cases, a third floor would serve as a hay bale storage unit to feed the animals.”

As you can imagine, whenever an alarm sounded, it would invariably end with a crush of firefighters desperately trying to force themselves down the same, tiny spiral staircase.

The story goes that this all changed when a Chicago firefighter called George Reid working for Engine Company 21 heard an alarm on April 21, 1878 while he was in the hayloft. It’s noted that when the alarm sounded, George was in no position to get to the first floor quickly, and happened to notice a hay binding pole that had been stored in such a way that it led all the way back down to the loading area. Rather than rushing for the stairs, Reid instead grabbed onto the pole and slid down to the loading area in a matter of seconds.

Reid’s split second decision attracted the attention of Captain David Kenyon, who, depending on which source you want to consult, was either with Reid in the hayloft when he did this, or was on the ground floor observing.

Whether this is really how inspiration struck, or is just a nice story that has grown up over the years, what we do know for sure is that Captain David Kenyon around this time really did set about making a permanent pole from the top floor of the building to the bottom a real thing.

After pitching the idea to his Fire Marshall, Kenyon was given permission to cut a hole in the floor to install a pole to see how it would go. Company 21 then purchased a large beam of hard-wearing Georgia pine and sanded it down until it was about 3 inches in diameter. They then coated it in several layers of varnish and some paraffin to protect their hands as they slid down it.

It is generally reported that Engine Company 21 were widely mocked by their peers over the pole, but this may well have had little to do with the pole itself, and more to do with just finding any excuse to make fun of them.  You see, with the exception of David Kenyon, Engine Company 21 consisted solely of black firefighters. And it wasn’t just the pole they were mocked for. The Chicago Tribune is noted as having been particularly harsh on Company 21, patronisingly referring to them as “boys” in articles detailing their heroics and on more than one occasion publishing racist cartoons and sketches about the group.

With this in mind, it may put a smile on your face to hear that, for the most part, whether because of the pole or just personal pride to prove the naysayers wrong spurring them on, Company 21 consistently out-performed their fairer skinned peers in response times.

The credit for this was ultimately given to the fire pole, which resulted in other stations around town installing their own poles, and the practice spread from there. 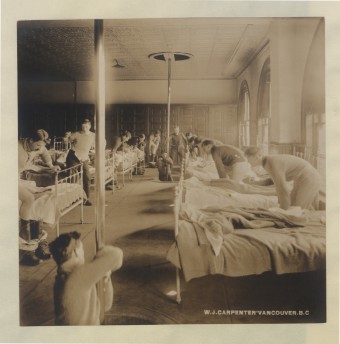 Holes in the floor next to potentially sleep-dazed individuals. What could go wrong? 😉

While fire poles are undoubtedly useful, in more recent years they have become noticeably more rare, partially because newer fire stations are often constructed across a single floor. Although older, refurbished stations can still be found containing fire poles, they’ve had to be changed somewhat to accommodate modern safety concerns. Along with being updated to feature shock absorbers and cushioned bases to limit damage from a fall, some poles feature baskets to stop firefighters accidentally falling and breaking their necks, a very real concern. For instance, in 2003 a firefighter in Seattle, Washington, Mark Jones, accidentally fell down the pole hole when he woke up in the middle of the night and was blearily stumbling towards the bathroom. While he survived the 15 ft fall, he suffered brain damage, a fractured pelvis, broken ribs, and fractured vertebrae. On top of that, one of his lungs was punctured and his very full bladder, which he had been getting up to relieve, ruptured.

On the flip side of the coin, some stations and states still embrace the pole thanks to the reason it was first invented- speed. Though estimates vary, it is generally thought that fire poles can reduce response time by as much as “20-25 seconds” in multi-storied fire stations.

There’s also some concern that having a bunch of firefighters rushing down stairs at the same time might end up being no safer than the poles.  As one firefighter, who asked not to be named, stated, “It only takes one person’s misstep and you’re going to have a crew of people at the bottom of the staircase.”

That said, according to an interview with one of the few manufactures still making brass fire poles, McIntire Brass Works Inc, some fire stations today have them purely for show, sometimes even installing fire poles that come from a hole in the ceiling that leads to nowhere.