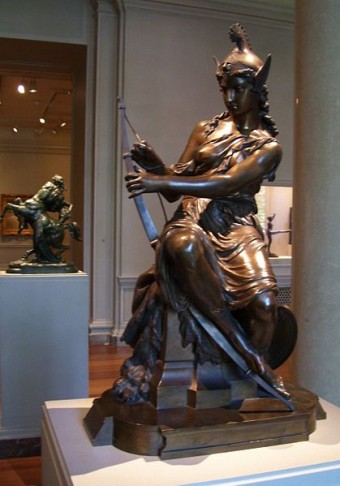 They are mentioned time and again by the ancient Greeks in both their history and mythology, going all the way back to Homer in approximately the 8th century B.C.  They were described as formidable warriors who cut off one breast to be better archers (one wonders if being lopsided would affect their aim ;-)). They lived in women-only communities, taking lovers once a year solely for the purpose of procreation. These ferocious, independent, goddess-worshipping women were called the Amazons.

Some of the most memorable Amazons from antiquity include Antiope, who the hero Theseus won during a raid and made his concubine (you can imagine how well that went over); Pentheselia, who met Achilles in battle during the Trojan War; and Myrina, Queen of the African Amazons.

Their name has since been used through the ages to describe warrior women in general, including a group supposedly living on the Amazon River in South America-  explorer Francisco de Orellana reported his group engaged in a battle with exceptionally skilled warrior women on a tributary to the Amazon river. This led to the re-naming of the river to Rio Amazonas, referring to the Greek legends, instead of the former name of  Marañón.

But did the formidable women who inspired the Greek legends and later archetype actually exist outside of the realm of myth? Until fairly recently, it was believed that the Amazons were created from scratch by the patriarchal Greeks as a device to highlight the supposed inherent superiority of males. In the myths, the Amazons fought and rode like the male warriors, but in the end they usually lost to them. (After all, Theseus made Antiope his concubine, and when her Amazon friends came to Athens to free her, they were defeated as well.) Thus, the Amazon myths were meant to show that changing the “natural” order of things (in other words, male-dominated) would always lead to Trouble.

In the early 1990s, archaeologists Renate Rolle and Jeannine Davis-Kimball independently discovered evidence that challenged the traditional beliefs about the Amazons. In the Ural Steppes surrounding the Black Sea in a remote Russian outpost, they discovered the graves of warrior women buried with their weapons, some even showing signs of battle wounds.

One grave contained the remains of a woman holding a baby to her breast. Nothing odd there, but her finger bones left evidence that she was indeed a warrior (the bones were worn from bow pulling), and she was buried with her weapons at her side. Some of the women were bowlegged from constant horseback riding, and their average height was 5’6 inches, making them exceptionally tall for their time, also in line with Amazonian legend.  All in all, about 25% of the warriors found buried there were women.

So who were they? It was determined that these women had been Scythians, the horse-riding race named by Herodotus (5th century historian and the “father of history”) as descendants of the Amazons.

Thus, there was finally archeological evidence placing descendants of the Amazons where Herodotus had claimed them to be. But interestingly, these grave mounds also contained the remains of men and children of both sexes – which would be in direct contradiction to the Amazons of Greek mythology, who were Oiorpata, or mankillers, and lived in women-only communities.

So there’s plenty of proof that many of these women were warriors, but if they were indeed Amazons, what was up with the guys being around?

Herodotus reported a group of captured Amazons managed to free themselves and kill off the Greeks on the ship they were being transported on.  Not knowing how to sail, they ended up running the ship aground where they encountered the Scythians. One thing led to another and the Amazon women became the wives of some of the Scythian men. This new group became nomads, traveling northeast until they reached the Steppes where they began a new race known as the Sarmatians. Herodotus wrote:

Whether Herodotus’ account is perfectly accurate or not, there is certainly enough evidence that this culture he was referring to had a social order that was far more flexible and less sexist than what was the norm in Athens at the time, with formidable warrior women to boot.

It’s thought by many historians that the warrior women in this group ultimately inspired the Greeks to develop various myths and legends surrounding this group’s ancestors, with the tales becoming more fanciful over time. So instead of the truth- that these were women who often needed to help out protecting the group’s home when many of the men were away campaigning- we get legends of an all-female group cutting off breasts and becoming the scourge of men everywhere.

Or, it’s possible that the myths had nothing to do with the Sarmatians specifically at first, but were later connected to them by Herodotus as he sought to find where the Amazons of the stories Greeks were so familiar with came from.

Either way, did the Amazon women exactly as described in the Greek legends exist?  As far as we know, no. Did formidable warrior women that certain of the Ancient Greeks thought were descendants of the Amazons exist? Most definitely.