Setting Fire to Glass- The “Nope” Chemical That is Chlorine Trifluoride 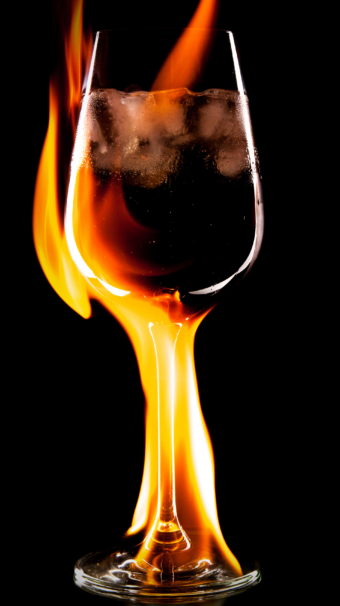 First discovered back in the 1930s, chlorine trifluoride is a rather curious chemical that easily reacts, sometimes explosively, with just about every known substance on Earth.

Just to get the ball rolling, here’s a few of the more unusual things chlorine trifluoride is known to set fire to on contact: glass, sand, asbestos, rust, concrete, people, pyrex, cloth, and the dreams of children…

The substance is so highly reactive that famously unreactive elements like platinum, osmium and iridium will begin to corrode when they come into contact with it. Notably tough elements like titanium and tungsten are also regarded as being wholly unsuitable to storing the chemical because they set on fire as soon as they come into contact with it.

The only known way to store chlorine trifluoride “safely”, which we use in the loosest possible sense, is to put it inside of a sealed containers made of steel, iron, nickel or copper which are able to contain the chemical safely if they’re first treated with flourine gas. This is because doing so will coat the metal in a thin fluoride layer, with which the chemical won’t react. However, if this layer is compromised in anyway, or the metal isn’t completely dry, chlorine trifluoride will begin to react violently and cause the vessel to explode.

Speaking of which, when chlorine trifluoride comes into contact with water, it will react explosively with it and as a fun byproduct creates large amounts of dangerous gasses such as hydrofluoric acid and hydrochloric acid. Hydrofluric acid in particular is incredibly dangerous and along with being able to melt things like glass and concrete, can permanently damage your lungs and eyes.  As if that wasn’t worrying enough, if you’re ever unlucky enough to get hydrofluric acid on your skin, it doesn’t actually hurt until a few hours later. After it has absorbed a bit, it starts destroying your nerves and bones and can ultimately cause cardiac arrest when it gets into your blood stream. In fact, in 1994 a lab technician in Australia accidentally spilled hydrofluric acid on his lap and despite immediately executing safety procedures including hosing off, immersing himself in a swimming pool, and later extensive medical care (including needing to have one of his legs amputated), within two weeks of the accident, he was dead.

Unsurprisingly, the Nazis were really interested in the military applications of chlorine trifluoride.  After all, it’s a substance that reacts explosively with water (humans are largely bags of water), and for those that don’t come in contact with it directly, there’s the byproduct of the deadly gasses. Further, there is really little one can do to put out the fires it causes directly other than to let them burn off.  If you throw water on the source of the problem, it will get worse. The reaction here also doesn’t require atmospheric oxygen to burn, so trying to use that method of fire suppression won’t work either.

Though chlorine trifluoride was thankfully never used during combat, the Nazis did succeed in creating several tons of the stuff in a secret facility known as the Falkenhagen Bunker before it was captured by the Russians in 1944. The Nazis working in the Falkenhagen Bunker referred to chlorine trifluoride simply as “Substance N” or “N-Stoff” and were planning to store it inside specially designed shells which could be used in battle. According to reports released by the Soviets following WW2, Nazi trials involving substance N were promising. But, of course, the weapon was incredibly dangerous for those carrying it around too, not just those they launch it at.

As an example of the kind of devastation chlorine trifluoride can have, you only need to consider what happened when almost a ton of this stuff was accidentally spilled inside of a warehouse in the 1950s. According to eyewitness reports, the chemical burned straight through a foot of concrete and three feet of gravel while simultaneously releasing a deadly cloud of gas containing a cocktail of “chlorine trifluoride, hydrogen fluoride, chlorine and hydrogen chloride” that corroded every surface it came into contact with.

After reading this you’re probably curious about what possible purpose this chemical could serve that doesn’t involve trying to recreate a scene from a Michael Bay movie. Well, due to the fact that chlorine trifluoride is such a great oxidizer, there have been several attempts to use it as a low-cost, lightweight rocket fuel, starting with the Nazis who tried to use it to propel torpedoes. Of course, it’s so difficult to store safely that it’s generally considered not to be worth the risk for this usage. After all, while you’d need to use less fuel thanks to its extreme oxidizing capabilities, if you had a rocket accident, you’d potentially be spewing tons of this stuff all over the place with no real effective way to deal with the situation. For instance, after studying and experimenting with this chemical for rocket use, rocket scientist Dr. John D. Clark famously said about the best way to deal with potential chlorine trifluoride rocket accidents- “I have always recommended a good pair of running shoes.”

There are a couple other useful applications though. For instance, it’s great for plasmaless cleaning of certain surfaces used in semiconductor manufacturing and it also works well at cleaning uranium residue off of the walls of nuclear power plants and removing built up oxides.