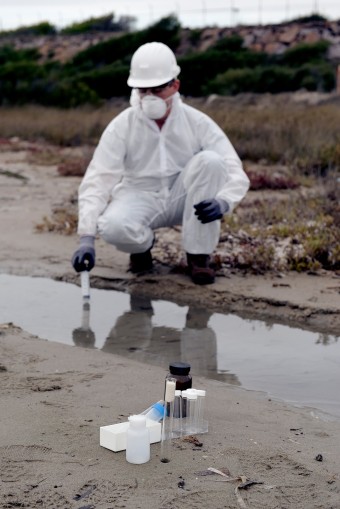 A major component of acid rain, an accelerator of corrosion and the rusting of metals, found in the tumors of cancer patients, a contributor to the greenhouse effect, fatal if inhaled, and capable of causing serious burns in the right circumstances, colorless, odorless and tasteless dihydrogen monoxide (DHMO) is responsible for thousands of deaths each year.

An exercise in perspective, by focusing simply on the negative, we can easily be tricked into thinking just about anything is bad, even something as necessary to life as water, made of two hydrogen atoms and one oxygen atom, hence dihydrogen monoxide. And thanks to a few precocious people, at different times over the last few decades, that is precisely what happened.

One of the earliest dihydrogen monoxide hoaxes was printed on April 1, 1983, in the Durand Express, a weekly newspaper in Shiawassee County, Michigan. The article warned the populace that inhaling the chemical “nearly always results in death,” and its “vapors … cause severe blistering of the skin which can be fatal if extensive.” By the end of the article, however, it was revealed that the dangerous chemical was, in fact, just water.

With the dawn of the internet, the chemically savvy continued to prey on the ignorant, and by 1994, internet jokers pretended to have serious conversations about the dangers of dihydrogen monoxide. One of the earliest fake organizations, eventually called the Coalition to Ban Dihydrogen Monoxide, was formed by students at the University of California, Santa Cruz, in 1989.

Early claims included: “Millions of gallons of the stuff are sprayed on fruits and vegetables. Do you want your children eating that stuff?” It was an “invisible killer” that was “found in almost every stream, lake and reservoir in America,” and that the U.S. Navy was “designing multi-billion dollar devices to control and utilize it during warfare situations [and even that] research facilities receive tons of it through a highly sophisticated underground distribution network.”

These early sites also noted that this “hazardous chemical” was used “as an industrial solvent and coolant . . . in many forms of animal research . . . in the distribution of deadly pesitcides . . . [and] as an integral part of the operation of nuclear power plants.” They also claimed that although it could damage concrete, erode natural landscapes and interfere with the operation of automobile brakes, it was still used “as a fire retardant” and “an additive in certain junk foods and other food products.”

Funny now, at the time, some people were truly deceived. In fact, one hoax in 1997 was so convincing, its four teenage masterminds were arrested and nearly faced criminal charges.

The young men, aged 14 to 16, distributed fliers in the Wylie Heights neighborhood outside of Pittsburgh, Pennsylvania, that carried warnings that dihydrogen monoxide was responsible for “severe hydration, frequent urination and possible death.” They included an 800 number on the flier (that directed the caller to a telephone sex business) and listed the name of the father of a classmate as a “county health inspector.” After the “health inspector” received several calls from distraught people, some of whom got mad at him, he called the police. The teens were eventually identified when they blabbed to his son, their classmate. Although they were not ultimately charged, they were forced to go door-to-door to apologize.

Also in 1997, Nathan Zohner, a 14-year-old student at Eagle Rock Junior High in Idaho Falls, Idaho, as part of a science project called “How Gullible Are We?” warned 50 of his classmates of the “dangers” of DHMO and asked them to join his effort to ban DHMO. He was able to get 43 to sign his petition.

Besides average citizens and middle school students, sometimes even public officials have been fooled. In March 2004, the City Council of Aliso Viejo, California, had planned to take up a ban on foam cups because of “environmental concerns . . . [of] the danger posed by dihydrogen monoxide, described as a chemical used in production of the [foam cups] that can threaten human health and safety.” Blaming the initiative on “a paralegal who did bad research,” the city’s manager pulled the proposed law from the agenda prior to any vote.