This Day in History: June 25th- Death of a Tudor 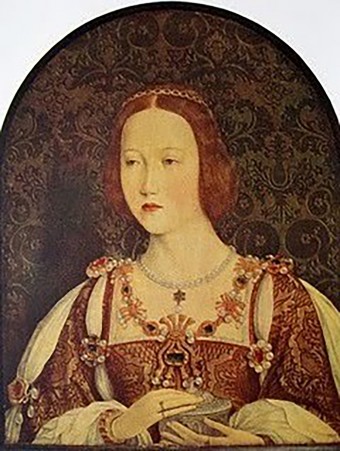 Mary Tudor was considered one of the most attractive princesses in Europe in her time. This, coupled with her high station, made her a very hot commodity on the royal marriage market. Her first fiancé was the future Holy Roman Emperor Charles, nephew of her sister-in-law Catherine of Aragon. That deal fell through after brother Henry had a falling out with Spain, which didn’t bother Mary since she wasn’t that enthused about the match in the first place.

Unfortunately, Mary would be a lot less thrilled with her big brother’s next choice of a spouse for her. You see, next up was King Louis XII of France, 34 years her senior and described as “feeble and pockly.” This was not a very pleasing prospect for a young and attractive princess in the prime of life, but monarchs generally think in terms of diplomacy, not romance. Henry had a chance to make peace with England’s ancient enemy, and he was going to take it, even if he had to make his favorite sister miserable to do it.

Mary did not go quietly; she was in love with Charles Brandon, Duke of Suffolk, a close friend to King Henry. As handsome and charming as Mary was beautiful and winsome, Suffolk was not royal by blood, but had gradually risen to his station because of his exemplary service to the King over many years. Mary was determined to have him and supposedly told her brother that she would only marry the decrepit French king if she could marry Charles once the old man kicked it. Supposedly Henry agreed, probably with no intention of keeping his promise.

Between all the marriage festivities and the efforts involved trying to conceive an heir, the already ailing King Louis XII had gone to meet his maker within three months of the wedding. King Henry VIII sent the Duke of Suffolk, of all people, to go collect the “grieving” widow and bring her home to England.

The Queen of France was required to hang around until it was established that she wasn’t carrying an heir to the throne. While they were waiting, in an act of almost unimaginable folly on both their parts, she and Suffolk got married. It was treason to marry a blood relation of the King without his permission and Suffolk was very likely facing a beheading when he got home for this act.

And, indeed, Henry completely blew his stack over the matter and was for a time strongly considering killing Suffolk. However, Suffolk had friends in high places to lobby on his behalf with the King, and Henry was previously quite fond of Suffolk himself. Once he calmed down, the King instead decided a sufficient punishment was simply to extract massive amounts of money from the couple in the form of a large annual fine and forcing Mary to hand over her exceptionally large dowry from her brief marriage to King Louis. Once the deal was agreed upon, the couple officially married, this time with royal approval, at Greenwich Palace in May 1515.

Throughout the rest of her life, Mary was always referred to as the French Queen, and never as the Duchess of Suffolk. This may have been a way to remind her that she married far below her station. If so, it mattered little to Mary, who lived a reportedly happy, if short, life with her handsome husband and children at their home, Westhorpe Hall, in Suffolk.  She died on June 25, 1533 at the age of 38.