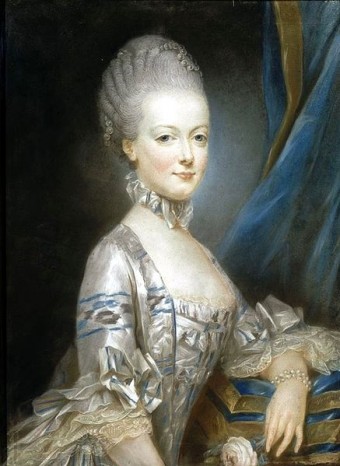 Now, I know what some of you are thinking, “Of course she didn’t, she spoke French!” But, in fact, she didn’t say “Qu’ils mangent de la brioche” either. In fact, this saying in France actually pre-dated her arrival there by anywhere from about thirty years to as much as a century.

This myth is often stated that on her way to the guillotine, forced by a mob of starving French peasants, she exasperatedly said “let them eat cake!” Another version says that when she heard the people were starving from lack of bread, she suggested, “let them eat cake.” There are numerous problems with both of these versions of the tail, but we’ll just stick with the “let them eat cake” part.

The actual saying “let them eat cake” was first written by the political philosopher Jean-Jacques Rousseau in his autobiography “Confessions”. At the time, Marie Antoinette was only 10 years old and living in Austria. She didn’t come to France until four years later when she married Louis XVI. More than that, Rousseau mentioned this same phrase in a letter written 18 years before Marie-Antoinette was even born.

In his autobiography, Rousseau references a “great princess”, who, when told the peasants had no bread, said “Well, let them eat brioche.” (brioche being a highly enriched bread). It is thought that either Rousseau coined this phrase himself or he was referring to Maria-Thérèse, who had lived about 100 years before and was the wife of Louis XIV. Historians are divided on which is correct. There is significant evidence that the French royal family believed the phrase originated from Maria-Thérèse and it was a story passed down among them. Indeed, Louis XVIII, in a memoir he penned in 1791, related the story of Marie-Thérèse saying this. In either case, this statement was used to illustrate the disconnect between the aristocracy in France and the plight of the people.

Further, during a brief bread shortage in 1775, which lead to a series of riots, in a letter from Marie-Antoinette to her Austrian family, she states the following: “It is quite certain that in seeing the people who treat us so well despite their own misfortune, we are more obliged than ever to work hard for their happiness.” Hardly something written by someone who was oblivious or unsympathetic to the plight of the poor.

So how did this saying get attributed to Marie Antoinette? Primarily, because the people of France loathed her. If you read up on her history, you’ll find most of this loathing was primarily because she was an easy and very visible target to vent their rage against the French aristocracy on. Marie Antoinette was Austrian and before her marriage to Louis XVI, Austria and France had been bitter enemies (in truth, things didn’t improve too much after their union, though at least open war was avoided until the King was eventually deposed in the revolution).

Initially, her beauty, eloquence, and personality endeared the people to her. But as matters degraded between the general public and the aristocracy, she became the favorite member of the elite class to vilify. Throughout most of her time in France, she was frequently accused of such things as: incest with her son; having numerous affairs with just about every man or woman she came in contact with; attempting to weaken France so that Austria could take over; attempting to bankrupt France through political intrigues and lavish spending (she was nicknamed “Madame Déficit”); attempting to siphon the funds in France’s treasury to her brother Joseph II of Austria; attempting to defraud jewelers of the cost of a certain extremely expensive diamond necklace; wishing to bathe in the blood of her political enemies; orchestrating orgies; being the “power behind the throne”, influencing many of the king’s decisions that were seen as hurting France (nicknamed “Madame Veto”); plotting to kill the Duke of Orléans; orchestrating the massacre of Swiss Guards; etc.

In reality, there is little evidence that any of these things took place, save her lavish spending. However, her spending habits were nothing compared to most French royalty at the time, which is somewhat surprising, considering the Queen was expected to out-do everyone else. But it should be noted, that’s relatively speaking. By most standards through history, her spending habits were indeed ridiculous for most of her time as queen.

She did, however, include very generous charitable contributions to the poor of France, among her lavish spending, which also makes the idea of her saying “let them eat cake” seem out of character, considering it represents a level of obliviousness that doesn’t align with what is known about her.

In addition to this, she had no real political power for most of her time as queen, as her husband tended to rebuff any suggestion she made due to the fact that she was Austrian and he was raised to distrust Austrians as much as the people of France did. Indeed, he rarely ever spoke to her about matters of state, fearing she might attempt to use this information to Austria’s advantage. Thus, she almost never took part in politics (which also was criticized at various times by the general public, who accused her of standing by and doing nothing while France slowly deteriorated).

When the king eventually withdrew from many of his political responsibilities, due to extreme depression, she finally stepped in to help calm matters between the assembly and the king, which had rapidly deteriorated with the state of France. Now that she was taking part in politics, this also was criticized, with the revolutionists accusing her of trying to bolster Austria’s position and weaken France (which there was never any real evidence of; indeed, the evidence is quite to the contrary. Most of her political dealings went against the interests of Austria, due to the fact that her goal was to secure the future of her children, who were French royalty, and that future was becoming in doubt with the state of France).

At this time, she also made many enemies among the French aristocracy for criticizing their lavish spending habits, when France was so near bankruptcy. France’s continued financial problems at this time when she was at the helm, also did nothing to bolster her popularity with the people, who blamed her for these problems, despite the fact that she had little to do with it, and lacked the power to fix it. Outside of the revolutionists, many of her rivals in court were also actively attempting to sway the people against her by giving large donations of bread and money to them, in an effort to undermine some of her political dealings. To make matters worse, she was also dealing with her dying son, who she insisted on taking care of herself, rather than allowing others to do it, which was traditional for royalty at the time. He eventually died of tuberculosis.

So basically, she was Austrian, a woman, and one of the top members of the French aristocracy at a time when being any of these three wasn’t looked upon highly by the general public; so she became target #1 for all their rage against their negligent rulers.

The expression itself, “let them eat cake”, was relatively well known amongst many of the revolutionists, and they used it to personify the disconnect between the aristocracy and the general public at this time. Post-revolution French historians also liked to use the phrase as it summed up the extreme selfishness and complete obliviousness of the French aristocracy during this period. So it’s not surprising that they assigned the phrase as being spoken by her, who was their favorite target for such things before her death as well.

Her life was actually quite a sad story from beginning to end and reputable historical accounts of herself and her actions are quite contrary to the general perception of her, not just then, but today as well. If you’re interested in reading more about this, I highly recommend this book, which is a very interesting read, assuming you like biographies and are at all interested in French history: Marie Antoinette: The Journey