June 1, 2015 Melissa
James C. asks: Who was Miranda from the Miranda rights? 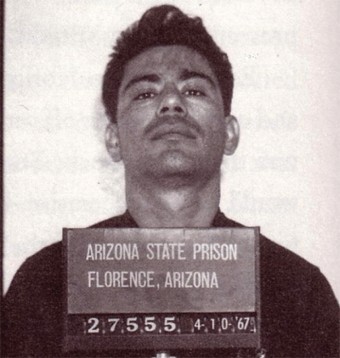 In 1966, the landmark U.S. Supreme Court case, Miranda v. Arizona, made it clear that the Constitution requires the police to warn criminal suspects in custody that they have the right to remain silent, that anything they say may be used against them, and that they have the right to an attorney – even if they can’t afford it. This warning, routinely given by local, state and federal law enforcement, as well as those who portray them in shows and movies, is today known simply as Miranda. But who was Miranda and what did he do?

Born March 9, 1941 in Columbus, Arizona (or sometime in 1940 in Mesa, Arizona), it appears Ernesto Miranda had a very troubled childhood. Although few official records exist to support a biography on Miranda with the accuracy level we normally strive for here, a handful of otherwise reputable sources do offer some details purporting to be of his early life, which we’ll use to try to piece together a very brief biography of the man before his more well documented exploits which led to the “Miranda warning.”

Miranda’s mother apparently died when he was very young (around age 6), and he didn’t get along with the rest of his family. By the time he was in the eighth grade, he already had a criminal conviction for what appears to have been a felony burglary. One year later, after another burglary conviction, he was sentenced to reform school. Shortly after he was released, he was convicted of attempted rape and assault, and again returned to reform school.

After serving a two-year sentence, now 17, Miranda moved to Los Angeles where he seems to have been charged and held on suspicion of armed robbery and sexual offenses (purportedly being a “peeping Tom.”) After he turned 18, he returned to Arizona, where he enlisted in the Army.

After 15 months of service, Miranda was dishonorably discharged; during his tenure, Ernesto apparently spent time in the stockade for being repeatedly absent without leave (AWOL) and, again, doing his fair share of peeping. The Army then ordered him to have psychiatric counseling, but he reportedly only attended one session.

After his dishonorable discharge, Miranda slowly made his way back to Arizona, and, true to his modus operandi up to this point, spent time in a jail in Texas for vagrancy and in federal prison in Chillicothe, Ohio, and Lompoc, California for stealing a car and taking it across state lines.

In 1963, Miranda moved with his common-law wife and daughter to Mesa, Arizona, where he seemingly tried to go straight, taking a job at a loading dock in Phoenix.

This all brings us to the the much better documented part of Miranda’s life and the series of events that led to him being remembered today.

On March 3, 1963, an 18-year-old girl had just left work at a movie theater in downtown Phoenix and was walking home. It was then that she was approached by her kidnapper, who held a knife to her throat, told her not to scream, held her hands behind her back, put her in the back seat of a car and tied her up.  Rather than call out or otherwise attempt to escape, she did what many would have done with a knife to their throat, reportedly freezing, feeling “she did not have time to do anything.”[1]

She was driven around for approximately 20 minutes, after which her assailant untied her and removed her clothes, although she tried to push him away, and asked him “Please don’t” and “Please let me go.” [2] In Miranda’s later confession, he claimed she didn’t resist, although he also said she had never “had any relations with a man before.”[3] According to the girl and the confession, Miranda then raped her.

At some point, the victim was freed and she went home and reported the incident to her family, and then the police. On March 13, 1963, Miranda was picked up and put in a line up, where the victim identified him.[4]

Miranda was taken to “Interrogation Room No. 2” and questioned by two officers. Two hours later, “the officers emerged from the interrogation room with a written confession signed by Miranda.” At the top of the confession, much of which was handwritten, was a typed statement that said in pertinent part:

I, Ernest A. Miranda, do hereby swear that I make this statement voluntarily and of my own free will, with no threats, coercion, or promises of immunity, and with full knowledge of my legal rights, understanding any statement I make may be used against me.[5]

According to one of the arresting officers, this portion was read to Miranda, apparently prior to his signing the statement, but after he had already confessed orally.[6]

Miranda was eventually convicted of kidnapping and rape (as well as a separate robbery charge) largely due to the introduction of his signed confession; he was sentenced to 20 to 30 years in prison. He appealed and challenged the introduction of his confession, which he claimed violated the constitution “because the Supreme Court of the United States says the man is entitled to an attorney at the time of his arrest.”[7]

The Arizona Supreme Court upheld the conviction, in large part due to the fact that Miranda never asked for an attorney during his interrogation.[8]

On appeal to the U.S. Supreme Court, Miranda’s conviction, as well as those of three others, was held to be unconstitutional; regarding Miranda, the court found that:

It is clear that Miranda was not in any way apprised of his right to consult with an attorney and to have one present during interrogation, nor was his right not to be compelled to incriminate himself effectively protected in any other manner. Without these warnings the statements were inadmissible. The mere fact that he signed a statement which contained a typed-in clause stating that he had full knowledge of his legal rights does not approach the knowing and intelligent waiver required to relinquish constitutional rights.[9]

The Miranda decision was not all that popular, and in fact, the vote among the Justices was only 5 to 4 in favor. Members of Congress were stirred to action, and in 1968, it passed the Omnibus Crime Control and Safe Streets act that effectively trumped the Court’s Miranda requirement; however, the statute itself was essentially ignored by law enforcement, which by that time had already made the Miranda warning commonplace.

As for Miranda, although the conviction was overturned, he wasn’t in the clear. A subsequent trial was held in 1966 at which Miranda’s common-law wife testified for the prosecution that he had confessed to her. The jury returned a guilty verdict, and Miranda was again sentenced to 20 to 30 years in prison.

Miranda was paroled in 1972. He violated his parole and was sent back to prison but was released, again, in 1975. On January 31, 1976, he was stabbed to death in what was apparently a bar fight.